Brian Azzarello on Crime and Superheroes 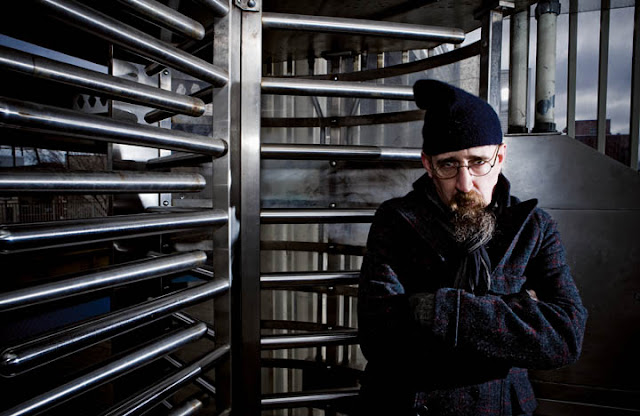 
“I don’t change my approach to anything, and I approach everything the same way;” Brian Azzarello says. “To come up with a story that, hopefully, is different than what you expect.”


Brian Azzarello is not just a crime writer, or a noir writer, or even a post-modernist superhero writer with deconstructionist tendencies: he doesn’t like to be labeled, and focuses on just telling a good story.
“What makes a good noir story?” Brian posits. “Let me answer that for you: it’s a great mistake.”
But, for a minute and keeping in the damnable crime/noir label, if Azzarello were in the interrogation chair with a light in his face, his short answers would frustrate the most patient cop. It becomes abundantly clear in a short amount of time—Brian Azzarello has thought his work, and the craft of writing, out so much that he’s boiled it down to points.


In short, he ain’t talking much, but what he has to say is brilliant. 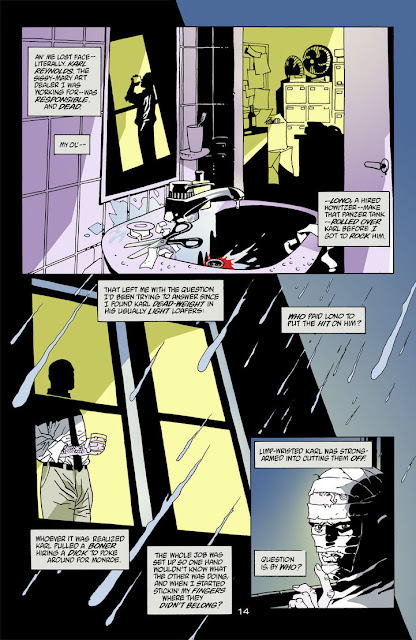 When he first pitched 100 Bullets, he left out the cobweb-like relationships between characters and a shadowy organization called the Minute Men, but instead focused on the high concept
“I figured pitching what it really was was not a good idea, because it became a very complicated story,” Brian confesses.


“But pitching the high concept? People can get their minds around that easily! A guy gives you an attaché filled with one hundred bullets, a picture of a guy who did an egregious wrong that ruined your life, and the ability to enact revenge. It’s easy for people to relate, because everybody’s had murder in their heart at some point.”


That’s the basic premise of 100 Bullets, a narrative slow boil that starts whistling loudly within its first year. Random characters are approached with a briefcase by the mysterious Mr. Graves, and they don’t always succeed in getting their man (or woman). Like everything that’s “too good to be true,” there are strings attached and conditions that come back and bit them in the ass. Running from 1999 to 2009, 100 Bullets came in during the crime and noir craze, and redefined Vertigo from being primarily horror and fantasy to include crime and espionage. 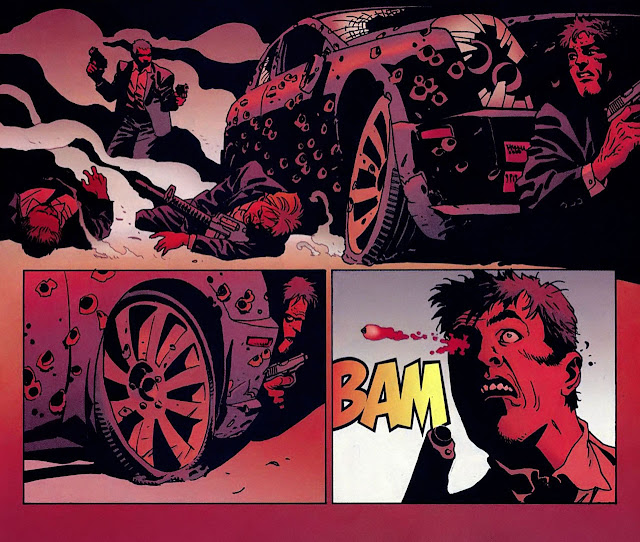 Before 100 Bullets, Azzarello struck out with the mini-series Jonny Double, with art by Argentine artist Eduardo Risso. Risso’s thin ink line and liquid shadows give a distinctive noir look that makes 100 Bullets a unique world visually as well as narratively. The artist worked on all 100 issues of the book with a translator on Brian’s scripts and the two have become a rare thing—a long-running creative team.


“Obviously, we get each other, you know?” Brian says. “He knows where I’m coming from and I know where he’s coming from. It’s funny, the way that it was put together—Axel Alonso was the editor of Jonny Double at the time, and we finished the first script and it was approved, so we were looking for an artist. He said ‘I’m going to fax you three guys to choose from.’ The fax machine comes on the pages start coming out. I pick up the phone during the fax transmission, and I still don’t know who the other two guys were. I was like ‘Eduardo’s pages came through. This is the guy.”


“You know what separates Eduardo from a lot of guys working in comics, is the fact that he designs a page,” Brian adds later. “He looks at the whole page, rather than panel to panel.” 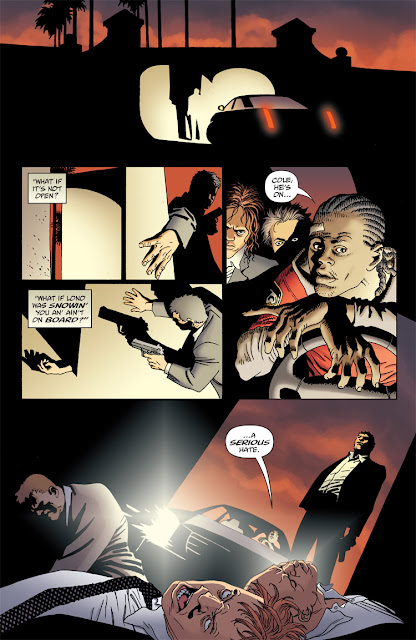 Brian’s plan for the issues of 100 Bullets were planned out from the get-go, creating as cohesive a narrative as Risso’s panels come together to create a solid instance of storytelling.


“I think that’s it holds together, because we were working towards a point where we knew where we were going,” he says. “We’d reference these things early on in the series that would come back, and that made it more compelling.”
Q: You’d said you take the same approach to every story, to sit down and tell a story. Does that change with format?
BRIAN: No, it doesn’t change with format. Like I said, I have to find a mistake to find a story about. (Laughs) 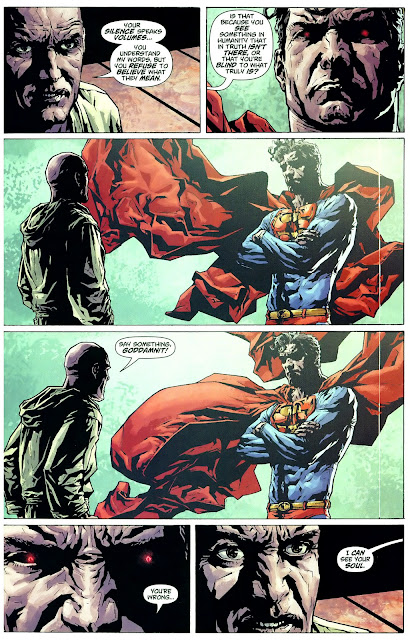 Azzarello went into the darker side of superheroes with his mini-series Lex Luthor: Man of Steel, with artist Lee Bermejo in 2005. Superman is presented as a fiery-eyed oppressor while Luthor is a lone man pushing mankind to aim for the future themselves, rather than rely on an alien Man of Steel.
“Personally? I agree with him,” Brian says of the bald-headed villain, who he crafted into an extreme crusader of humanity’s betterment.


In contrast, Azzarello and Bermejo reunited in 2008 for the Joker graphic novel, where the villain was left unsympathetic, a homicidal mobster figure on par with Alan Moore’s portrayal in The Killing Joke. Earlier, Azzarello and Risso had taken a crack at Batman in the storyline “The Broken City.” 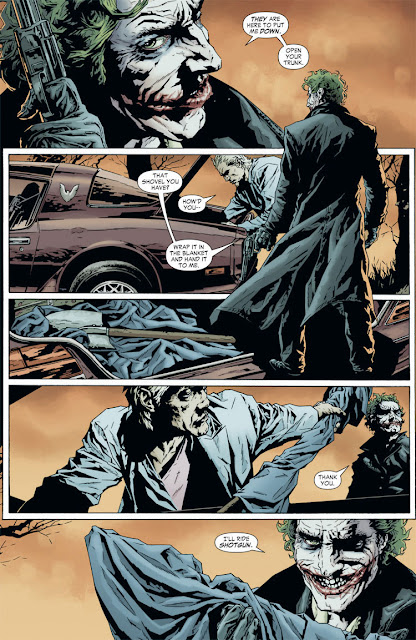 “I always treated the cape as a trenchcoat,” Brian states. Making Batman less Dark knight and more Detective created a noir-ish storyline that put the character on par with Mike Hammer or Sam Spade.


They revisited Batman for Wednesday Comics, a weekly comics section put out by DC for twelve installments, taking a more traditional approach than many of the other creative teams in the project and embracing the weekly distribution. 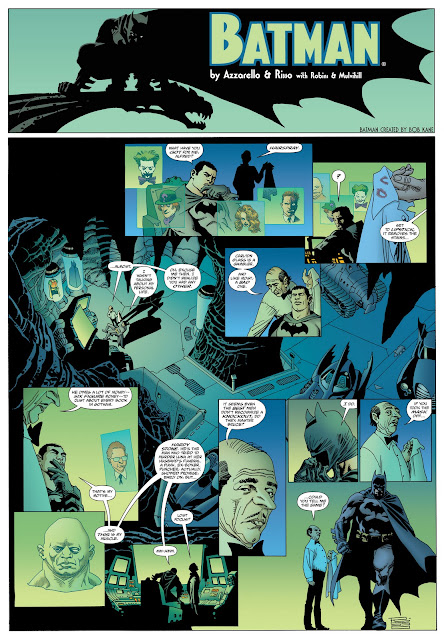 “It was ‘Tell a story once a week, and do one page,’” Brian reveals. “We really did our job, because reading that in installments works better than sitting down and reading it all at once. There’s a time that’s needed in between each one of those pages. When you sit down and read the whole thing, the time’s not there and the story doesn’t work as well.


“Time is designed into that thing. It was like we were doing the Dick Tracy Sunday strip. Usually those Sunday strips recap the week, anyway, and that’s what we were doing. Some of those other stories work a lot better when you sit down and read it all at once.” 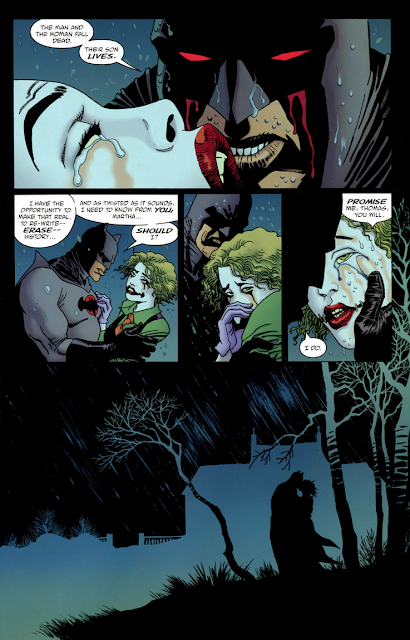 Azzarello and Risso reunite this summer for Batman: Knight of Vengeance, a tie-in to DC Comics’ company-wide Flashpoint crossover. Azz rarely does crossovers, but there’s something about this one that compels him.


“I normally don’t get involved with these crossover events...because they hold no interest for me,” Brian laughs. “But this one is different, that’s why I’m involved. I’ve turned down a lot of work because if I can’t find a reason to tell a story, I’m not going to tell it.


“I’d say I’ve been lucky so far that I’ve been able to hold true to that.”


Azzarello and Risso team up again for Spaceman, their next regular series after 100 Bullets.


“What’s the premise? A lot of dire predictions come true in the very near future, and—,” Brian pauses. “I don’t know if I want to tell you what it is. 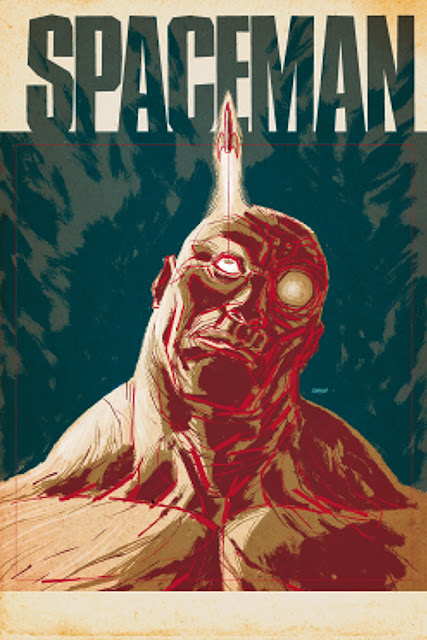 “I’m just saying that’s the backdrop in which these characters are interacting, and it will still be a small, personal story. I don’t think humanity is going to change. What motivates us right now should motivate us a thousand years from now.”


The approach to Spaceman, a science-fiction book that may have some crime elements, is different from the monthly approach to 100 Bullets:


“The way we’re approaching it now is like seasons, rather than doing a regular ongoing series,” Brian reveals. “Eduardo doesn’t want to do that again. He wants to do eight or nine issues a year, which is how we’re going to approach it. The first year will be nine issues, and then we’ll take off a few months and come back with another one.”


“Somebody’s got to come in and look at it differently than we have been,” Brian says of digital comics. “Just throwing comics on the web is not taking advantage of the medium, and we don’t even know what the medium is yet, because it hasn’t been come up with.


While Brian is a fan of some digital comics, he’s not sure they should be trying to replicate the reading experience of a paper issue, but should become something entirely unique.


“I look at it like maybe what we should be trying to replicate is the experience of a filmstrip,” he notes. “You’re flipping to the next image, but we don’t have to be confined by that horizontal rectangle: we can go vertical, do different things like break panels. I’m probably not the guy to come up with it, either; I have too many things to do.” 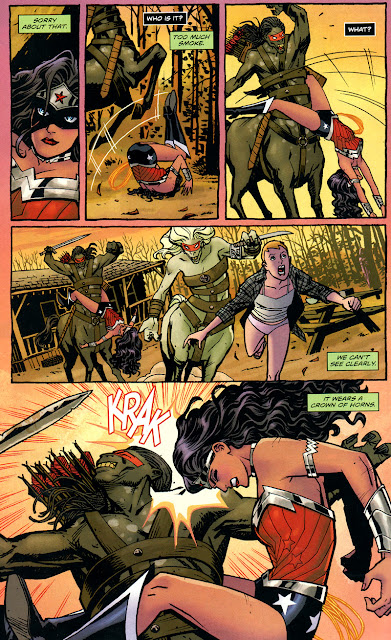 Posted by Christopher Irving at 3:15 PM