Words: Koren Shadmi
Ingmar Bergman
First time I saw a Bergman film was by chance - 'Hour of the Wolf' was playing on TV. It was like nothing I've ever seen, a ghost story that was so sparse and stark yet so beautiful and haunting, I was hooked. Bergman films, especially his later ones, are very minimal, a few characters, limited settings - they almost feel like a play. But behind the simplicity there is a deep an complex universe, and a powerful philosophical undercurrent; Bergman is not afraid to deal with some of the biggest questions in human existence such as; death, sexuality, morals and religion. There's also something brutal and gut wrenching in the films - The rape and murder scene in 'A virgin Spring', for instance - most often though, the horror is shown in the form of absence, as in 'Through A glass Darkly' where the young woman describes her haunting encounter with god - who according to her is a giant spider. Bergman understands that true horror is unseen and sometimes withholding elements from the viewer can be quite a powerful tool.
http://www.youtube.com/watch?v=rOqmVD8jTnc
Tsukioka Yoshitoshi
One of the greatest Yokiyo-e Artists of Japan, and one of my all time favorites. Yoshitoshi is a master storyteller, who weaves his narrative using graphic and dramatic compositions, a wide variety of lines and patterns, and unique colors. His characters – beautiful women, warriors, monsters or demons - are alive on the page, drawn with vivid facial expressions and telling poses, contorted bodies and expressive hands and feet which speak without words. There’s a strange combination of violent insanity and cold restraint in Yoshitoshi’s work that not a lot of artists can juggle.
As opposed to western pantheon of art –japanese paintings were never about creating a three-dimensional illusion of reality – instead, they immediately acknowledge that the image surface is flat – Yoshitoshi is liberated by this total flatness; playing with patterns, textures, and negative space. A real feast for the eyes - these woodblock prints have been raw inspiration for both my comics & illustrations. 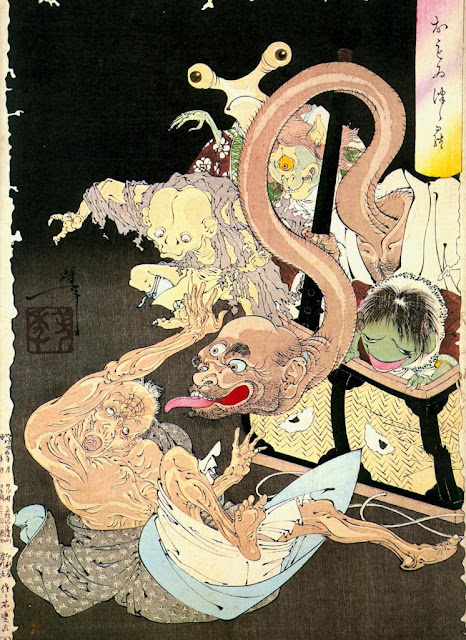 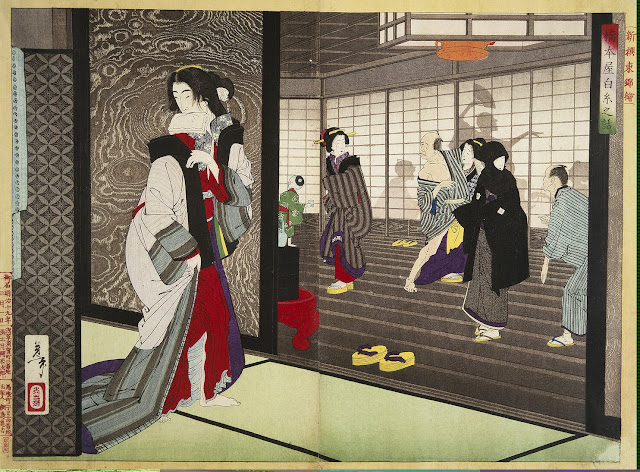 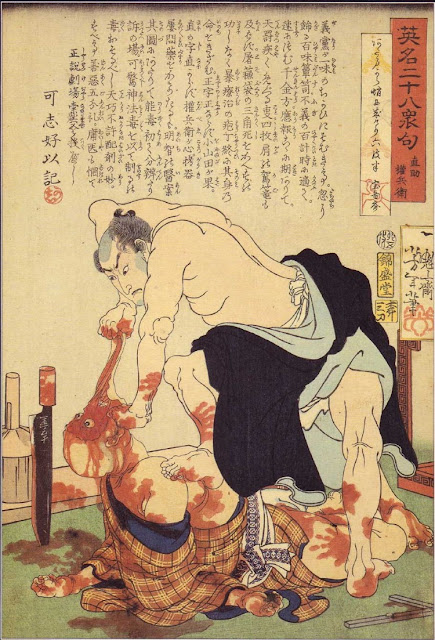 Lee Hazelwood
Hazelwood is a great storyteller, his songs are tragic, emotional, grand and sometimes also funny, His albums sport production values that you can’t really hear anymore these days. Hazelwood is probably most known for his work with Nancy Sintara, and they have some amazing duets together, but his solo albums are also really fantastic and worth listening to. Hazelwood’s got a deep and resonating voice that lingers even when the song is over, and he’s especially good listening while penciling, inking or after a bad breakup.
Nancy Sinatra & Lee Hazelwood
Uploaded by scootaway. - Watch more music videos, in HD!
David Cronenberg
In my some of my early (and thankfully unpublished) comics you could really feel the influence of Cronenberg. I feel my work has moved away from it’s ‘cronenbergain’ zone, but at the same time I do want to acknowledge him as being a big influence, and someone who is interested in the same themes as I am. ‘Dead Ringers’ probably tops my list – a fall from glory tale about identical twins who become involved with the wrong woman. Cronenberg’s films often deal with characters who change both physically and mentally, and with the elusive relationship between mind and body. In addition to the originality of the concepts, his films also have a very beautiful and distinct visual aesthetic; watching a Cronenberg film sometimes feel like watching a live surgery, a cold sharp knife going into warm flesh – its jarring, sometimes repulsive - but you just cant look away.
Also recommended are ‘Videodrome’ and ‘The Fly’
Alejandro Jodorowsky
Jodorwosky also writes comics and collaborates with Moebius, but I'm writing here about his work as a filmmaker. Jodorwosky has created some of the weirdest, most psychedelic movies I have ever seen, and I'm always baffled by how was able to produce such rich and eclectic imagery. 'Il Topo' and 'Holy Mountain' are probably my two favorites, both showcasing a type of visual and spiritual journey with Jodorowsky himself playing the main role. For me these movies are inspiring not only because of their rich visual and symbolic landscape, but also due to their boldness and and unabashed mentality. To make such a daring and surreal film while keeping the viewers guled to the screen is no easy feat.
Additional inspirations & items/people worth knowing about:
Film: Sunset Boulevard
Books: Journey to the End of the Night by Louis Ferdinand Celine
Fine Artist: R. B Kitaj
Music: John Cale
Koren Shadmi was born in Israel, where he worked as an illustrator and cartoonist for various magazines. At 17 he had his first graphic novel published, Profile 107,followed by another book that collected his work from children's magazines. He then served for three years as a graphic designer and illustrator in the Israeli Defense Force. Upon completion of his service, he relocated to New York to study at the School of Visual Arts, where he acquired his bachelor’s degree, graduating with honors. Koren’s books have been published in France, Italy, Spain, Israel, and the US. His first English book, In The Flesh, was published by Random House in 2009. Koren’s work was selected for the Best American Comics 2009 anthology edited by Charles Burns.
Koren's illustration work has appeared in publications such as: The Wall Street Journal, Spin Magazine, BusinessWeek, the Village Voice, The Boston Globe, The New York Times, Mother Jones, ESPN the Magazine, Popular Mechanics, and many others.
Read Koren's webcomic The Abaddon at Abbadoncomic.com.
Posted by Christopher Irving at 12:22 PM