Stephen Lindsay has his hands full. The acclaimed indie writer/creator of Jesus Hates Zombies enters 2011 with no less than five books coming at us. One of his latest offerings is Warriors of the Dharuk, a four-issue, all-ages story written by Lindsay while watching his seven-year-old son, Ayden, at play.  Dharuk invites readers into a world of animal warriors flavored by ancient Japan and delivers an action-packed first chapter of a great (but violent) comic book for young readers.

The story was assembled similarly to the now ubiquitous Axe Cop (written by a five year old, drawn by his older bro,) but the Lindsay approach to this method produces a more serious story and a richer world than the ribald ramblings of Malachai and Ethan Nicolle. Of this father and son collaboration, Lindsay Sr. writes:
“I was sitting around with my kids, watching my son play…He started telling a whole story about how his [stuffed] koala was a ‘mighty warrior,’ and the [stuffed] frog was his ‘mighty steed.’ I was instantly hooked…I just started writing it down. I fleshed out the story, created some other characters, and put it all together. When I would come up with a new idea, I'd run it by Ayden to see what he thought. He'd give me his input and I'd keep going.”
So far the story seems similar to Avatar’s “unobtainium” plot thread mostly in how it polarizes the conflict between the nature-loving Dharuk and the industrialized ambition of the Shak-Ta.  The main focus is put on the coming of Jody, the koala, a warrior-in-training and an Everyman. Jody encounters a Shak-Ta patrol and does battle alongside Ota, an armadillo, who teaches the ways of war and looks like a mix between early Laird and Eastman and Usagi Yojimbo. In other words: he’s awesome. 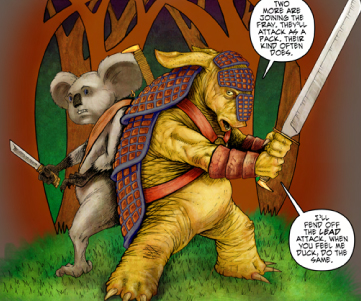 Lindsay has turned out an enjoyable read with an age-appropriate ear for fantasy dialogue that’s both challenging and accessible. There’s enough world-building jargon in the text to satisfy hungry readers and even includes translations in asterisked editorial notes. I don’t see those much anymore. It’s easy to imagine appetizing source material for this mostly enchanting milieu in the back of issues to come.
The best part about this book is the way that Dave Myers’ pencils combine with Alfredo Lopez Jr.’s colors to produce believable textures, an important part of any story about naked, talking mammals and reptiles. Myers sweetens the deal with a bold use of panel shapes that serve the story by framing narrative elements, emphasizing motion or as art nouveau ornamentation. In regards to the artwork, Lindsay says this:
“Collaborating with Dave has been amazing!..The character 'Ota' [and] those fantastic panel layouts are 100% Dave. I never write panels with that much detail. It's brilliant.” 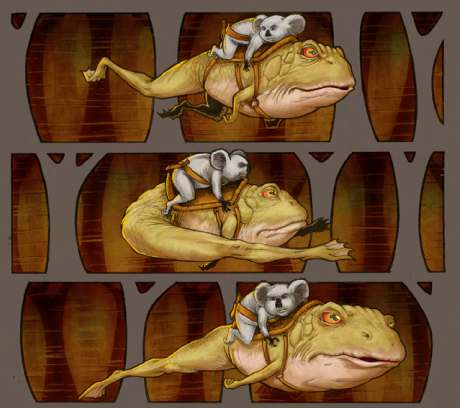 My only noteworthy grudge with this issue is amplified by its pacing and structure: more than half of the comic is a single, continuous action scene in the woods. The fun in a book like this one should be found in climbing over twisted roots and mossy rocks while small fauna scurry away, but unfortunately, the forest backgrounds and the ways the characters interact with them are largely mundane. Once the main melee is ended, Myers does suitable exteriors for a stone fortress and a straw hut, but so far, the settings don’t hold much character.
Despite this want for charm, and because of its strengths, I feel that this comic book has more to offer. Lindsey promises:
“Later we get a much deeper look at the Dharuk way of life and the things that shape their beliefs. That's a key part of the entire story.”
Both curious and appealing, when expanded, this concept could produce another hit for its writer, but only if it can get into the hands of the right audience. Stephen Lindsay explains his take on all-ages content:
“For me, personally, (and for Ayden)  [an all-ages story works when it] doesn't TRY to be all-ages. Its just a great story that doesn't have anything in it that isn't suitable for kids. But that doesn't mean it can't be complex with something substantial to say.”
ALRIGHT! So buy one for your nephew.

Purchase Warriors of the Dharuk at CollectorsWorldStore.com.
Posted by Christopher Irving at 11:13 AM