The Life and Times of Martha Washington in the 21st Century: A Review 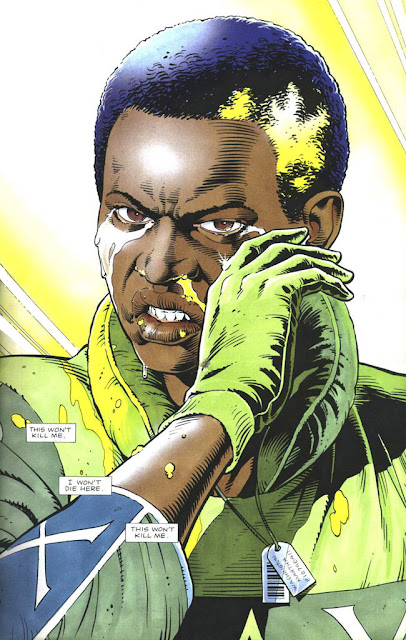 Before I begin this review of this mammoth book of Martha Washington stories, let me set things up properly with a statement regarding Objectivism and Ayn Rand’s works. I respectfully disagree. No more, no less. And it's cool for others, especially the fiercely talented, if that's how they see things, but not for me. So, that being said, I expunged the references to that philosophy and found the book a bit more palatable. Palatable? Actually The Life and Times of Martha Washington in the 21st Century

is every bit of awesome. Great artwork from Dave Gibbons. His dinosaurs are sweet and his spaceships are tight lined monoliths of dignified beauty. His compositions, as always, are perfectly framed narratives. Between that and a solid script by Frank Miller, we got comics royalty clocking in and making magic on almost every page. 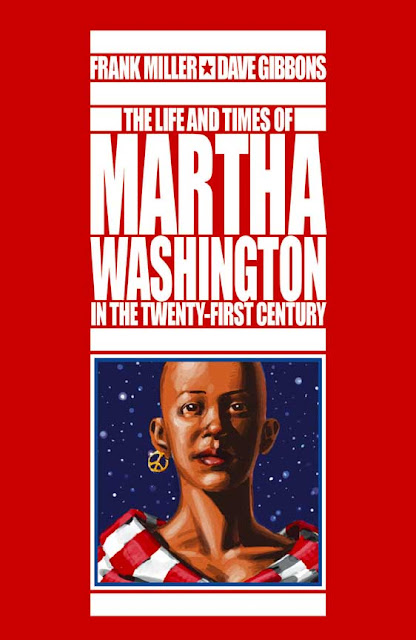 It really was hard for me to get past the underlying philosophies in Frank Miller’s scripting. The second part of the volume (collecting the Martha Washington Goes to War limited series) felt quite simply, like propaganda and all that implies: straw man arguments (in the form of the Governemnt and the unmaintained Harmony satellite), preachy segments showing the weakness of the other viewpoint (from the scientists who created their on personal Eden), and purposeful nobility that can come only from the few enlightened heroes (the aforementioned scientists). If it wasn’t so over the top and intelligently self aware I would have been offended. Tonewise, it was the equivalent of Verhoeven’s Starship Troopers and its hilarious take on fascism. or the film version of Miller's own 300. There is a reason Frank Miller doesn’t really do team books. His work usually takes the form of the lone lightbringer casting a torch into darkness. It is a formula that works quite well for heroic fiction.

There is some unevenness to the book, as is explained in the intros, they had a hard time pinning down the level of “depressing darkness” versus light hearted satire and it’s all there on the page. It begins as a bleak street level pot boiler and within sixty pages or so we have a giant robot that looks like a Bob’s Big Boy trampling through a jungle and mowing down enemy soldiers. This friction between darkness and comedy is what makes the book special and where the balance is just right between camp, violence, grittiness, and humor… well that’s the place you find the very best writing from Frank Miller. He’s the kind of writer who keeps so many seemingly conflicted elements in play that it’s like a Chinese acrobat balancing spinning platters on sticks. Somehow the whole crazy mess stays in the air and it really feels unbelievable. Half the joy of the book is the absolute strangeness of it. You can’t believe what you’re seeing on the page. It makes super heroes pounding the shit out of each other seem downright pedestrian. 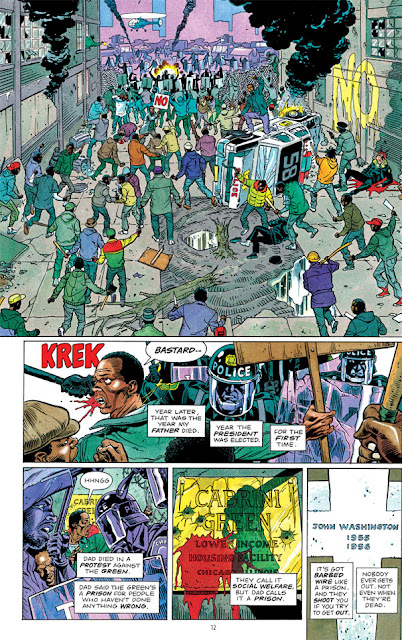 Unfortunately, the strangeness does get in the way of some of the character building. The absolute unreality of it makes characters feel like props in a stage play. Some folks feel that Martha Washington is Frank Miller’s most fully fleshed character, I disagree. His Bruce Wayne still holds that distinction. The unrelenting pummeling beat poetry of DKR running strong for two hundred or so pages is a voice that deservedly feels as real as Holden Caulfield. Not to say that Martha isn’t a great character, she is built to run and she runs smooth. Her language is blunt and lacks that certain ratatat I would have loved but she is likeable through her actions.

I thoroughly enjoyed and appreciated Dave Gibbons’ contribution of production stories as bumpers between the segments. I’m the kind of guy who will sit at someone’s feet for hours to hear about what went into working on particular comics. It was also valuable to understand that there were gaps of years between some of the parts of the book. How they had grown as artists and how technology affected the printed work informs the book and adds yet more depth and context. The period these stories were worked on was an important era in the way comics are made, marketed, and sold.  1990-2008 was for me and many others, an adventure in comics fraught with peril, exploration, and ingenuity. Seeing the Martha Washington stories as a mirror to that timeline brings yet another platter balancing on a stick… and still it stays in the air. 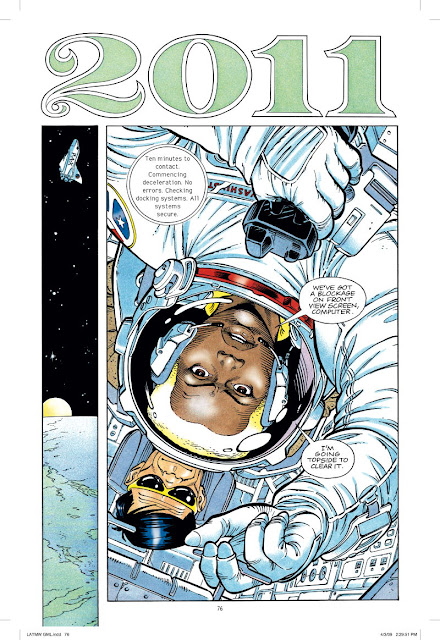 Reviewed from a PDF provided by Dark Horse Comics.

Reviewer Jared Gniewek joined Graphic NYC with the site's relaunch in September, 2009. Jared has worked in the music industry as a back line technician, performer, and promoter. He has also been a freelance writer whose work can be seen in the recent re-launch of Tales from the Crypt and heard on The Dark Sense, an audio anthology of the macabre. His cartooning can be found on his blog Scary-Oke, a monster indy cartoon karaoke game stemming from his own twisted mind.

Posted by Christopher Irving at 1:10 PM