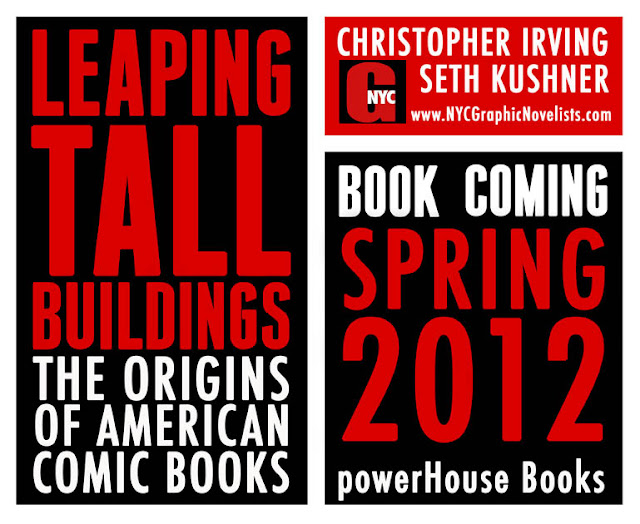 To ring in the New Year, we're thrilled to announce Graphic NYC's signing on with Brooklyn-based publisher powerHouse Books for our book Leaping Tall Buildings: The Origins of American Comic Books!
Due out in Spring of 2012, Leaping takes our Graphic NYC essays and remasters them into a whole new and unique experience, giving readers a cohesive tapestry of the history of comic books.
How does this affect the Graphic NYC site? Not very much, truth be told. While Christopher's cranking away on the book draft, he will take time to write a new GNYC profile on a monthly basis, and we're also planning on adding on an additional contributor (or two).
CHRISTOPHER: "One thing we've found in talking to everyone—from Joe Simon, to Jules Feiffer, to Art Speigelman to Paul Pope, and all the way up through Marvel CCO Joe Quesada or even newer talent like Kevin Colden—is that you can actually trace the development of the comic book through their personal experiences, be it on newsprint or an iPad. Beyond that, though, is that meeting all of these folks has been a helluva’ ride, especially since a few of them are personal heroes of ours."
SETH: “There have been so many memorable experiences. Hanging out on a Hell’s Kitchen rooftop with Frank Miller, in a Gotham alley with Denny O'Neil and in front of NYC’s Flatiron Building (The home of The Daily Bugle in the Spider-Man films) with Brian Michael Bendis has been a blast."
The deal with powerHouse comes as we wraps our second year online, and also caps an interesting year for the two of us. 2010 saw the publication of Seth's online photo-based webcomix series, CulturePOP: Photocomix Profiles of Real-Life Characters on Act-I-Vate.com, as well as the print birth of Christopher’s Graphic NYC Presents Dean Haspiel: The Early Years from IDW.
CHRISTOPHER: "On a personal note, it was the toughest year of my life: my father, Elliott Irving, passed away in late July as I was wrapping production on the Dean book. Graphic NYC nor Leaping could have happened without his support. As far as I'm concerned, honoring him means making Leaping Tall Buildings worth of sitting on my bookshelf next to the copy of Jules Feiffer's The Great Comic Book Heroes

that he gave me when I was twelve."
SETH: "The signing of this contract is the accumulation of three years of work, (so far!). It's been a long road since that cold January day in 2008 when cartoonist Dean Haspiel and I had a conversation about a potential 'photo book on comics creators' at the now-defunct Rocketship Comics in Brooklyn.  From there, Dean began hooking me up with other cartoonists to photograph, and then, a few months later, he connected me with Chris and that team-up begets our upcoming book."
“We knew powerHouse was the right publisher to bring our dream to fruition when we saw they were as excited by the project as we were and we're confident that with pH publishing and and Random House's distribution, the book will be a success."

Keep your eyes on GNYC: We still have more aces up our sleeve (Kyle Baker profile, anyone?) as we work on making Leaping reach the stratosphere.
Posted by Christopher Irving at 7:48 AM