The Horror! The Horror!: A Graphically Speaking Review 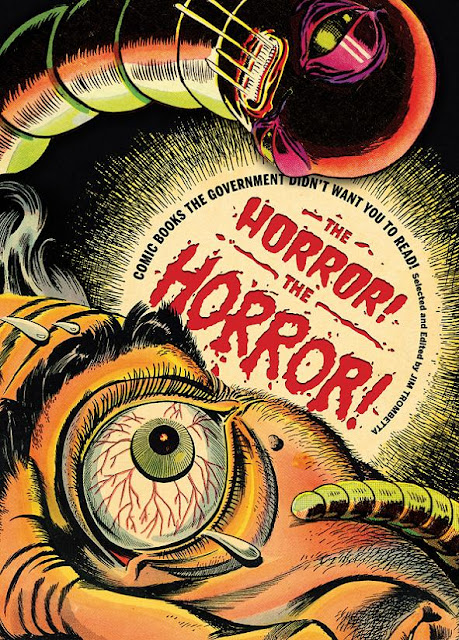 Every once in a while, a book about comic books comes out that raises the bar—be it conceptually, narratively, or from a writing perspective—The Horror, The Horror: Comic Books The Government Didn’t Want You to See

cranks it up a notch. While completely accessible and effective in its own right, The Horror! reads as a companion to David Hajdu’s comics censorship manifesto The Ten Cent Plague, often citing that book. But where The Horror excels is in the packaging of the 200+ page paperback volume: Jim Trombetta’s essays, staggered between stories, establish a social and historical context for different aspects of the horror comics. It’s more than just the KeFauver hearings that he covers, as horrifying facts about American brutality during the Second World and Korean Wars serve to make the uber-violence of the reprinted comics seem tame in comparison. 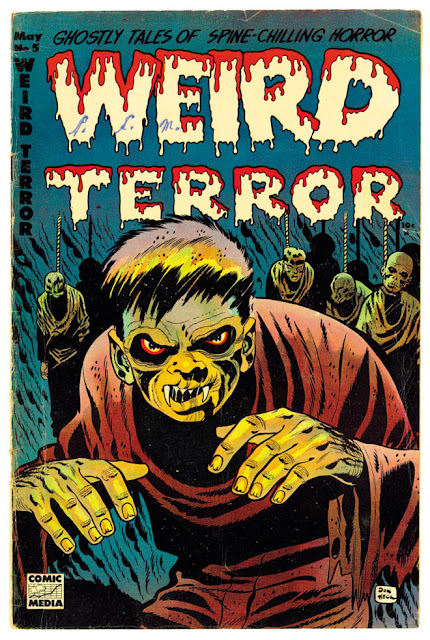 The reproductions of stories from defunct and obscure comic companies (like Ace Comics, Master Comics, and Four Star Publications) even include contributions by Steve Ditko, Bernard Bailey and (most notably) Basil Wolverton. Wolverton, most known for his distinctly monstrous and gross style of artwork (most notably with his landmark Leena the Hyena), displays an effectiveness in weird artwork coupled with cerebral narration. His stories about a man transported to a world of green bat-like monsters, and mind-controlling “Brain-Bats of Venus”, are stand-outs in a book full of other obscure horror stories.
Jacob Covey’s design gives The Horror! a distinct look in everything from his imaginative use of typography (each chapter heading has a scrolling effect by starting at a larger font size, and then slowly dwindles down to the main body size) and effective use of blown-up comic book panels, cropped to effect. The reproduced pages haven’t been visibly cleaned up, and even retain the yellowing of the pages. There’s been a movement towards reproducing the feel of reading an old comic book, from Chip Kidd’s designs on Art Spiegelman’s Jack Cole and Plastic Man in 2001 on; it’s an aesthetic that holds the imperfections in as high a regard as any mastery, and is refreshing after two decades of computer recolored and “remastered” slick paper archive editions. 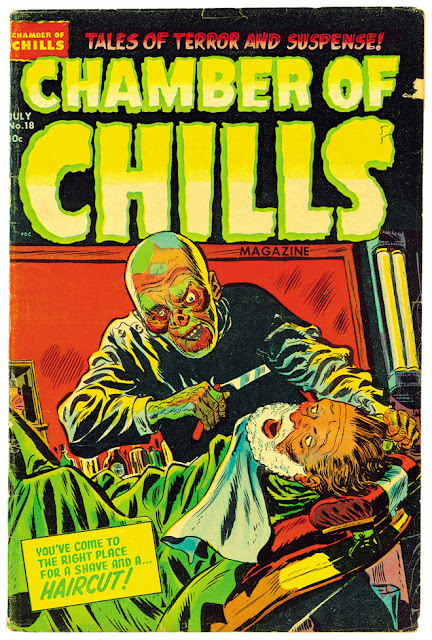 In the final chapter, Trombetta delves into the socio-political climate of the post 9/11 America in a far more superficial manner than any of his earlier views on the Korean War or the Commie-hunting senators and psychiatrist. While in full agreement with Trombetta, it feels a little soap-boxy without more context than mere mentions of Abu Ghraib and Guantanamo. An extra page or two would have provided a more substantial and satisfying end to an impressively packaged book.
The icing on the cake is an included DVD of Confidential File, a 1950s “documentary” show that features a staged scene of a group of comics-reading kids coercing and torturing an innocent kid in the woods. The segment was directed by Irvin Kershner (of Empire Strikes Back fame) and is laughable at best. This black and white archeological find was uncovered by Hajdu, and also features Senator Estes Kefauver (obviously reading from cue cards or a teleprompter), and a segment where host Paul Coates interrogates a bunch of kids on how badly horror comics have traumatized them.
The Horror! The Horror!, beyond being a well-designed and written book on comics history, is an intelligently edited package, giving the reader the context needed to understand the framework these old horror comics existed in. I only hope that it sets the stage for further smartly-edited comics packages.
Special thanks to Gabby Fisher of Abrams for the review copy of The Horror! The Horror!
Posted by Christopher Irving at 7:05 AM