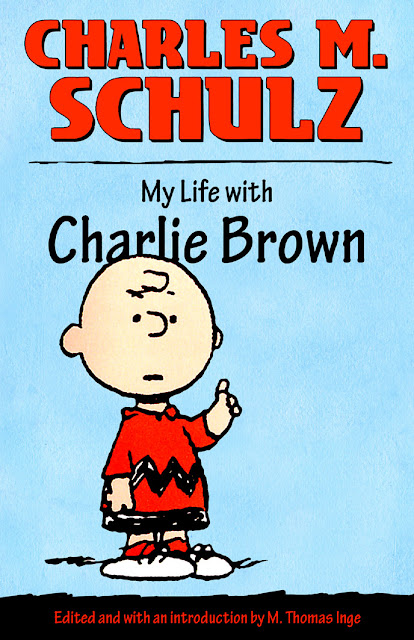 Words: Christopher Irving
Charles Schulz wasn’t, outwardly, an intellectual. He was, however, a genius when it came to the comic strip. My Life with Charlie Brown

The essays cover the gamut from Schulz’s thoughts on religion (in and out of the comic strip), his recollections of his life and of his philosophies as a cartoonist. At the forefront of his thoughts on the strip form was his desire to see the comic strip break out from the ghetto the general public and newspapers had shoved it in as a lowly art form, and to see it elevated to the same level as other popular arts, such as television.

The interesting dichotomy of Peanuts is that Schulz’s visually pared down strip was designed to accommodate the shrinking space of the daily newspaper comics page – while it narratively and stylistically helped to elevate the comic strip, it also allowed for syndicates to start mistaking minimalism for “dumbing down”. One has to wonder how much Peanut’s success contributed to the doomed format of the newspaper daily, while its success simultaneously gave comic strips a higher level of credibility.

My Life was released, in part, as a reaction to the overly dense and heavy tome Schulz and Peanuts: A Biography by author David Michaelis, a biography that the Schulz family felt portrayed Charles in a more negative light than he was in real life. This is where the conflict comes in with My Life: every public figure has their private life (how they really are), as well as their public face (the persona they want to convey to the masses). Neither Schulz or My Life can claim to fully capture all aspects of Schulz the man; I have a hard time believing that he was 100% the person he portrayed through these collected essays, but I do buy that level of sincerity conveyed in Schulz’s personal writings more than the depressive individual portrayed in Michaelis’ torturous read.

At the end of the day, though, My Life is crammed with invaluable advice and philosophical bits by the most hard-working cartoonist in the history of comic strips: Schulz worked on every line of every Peanuts strip, not once employing assistants.
Posted by Christopher Irving at 11:35 AM