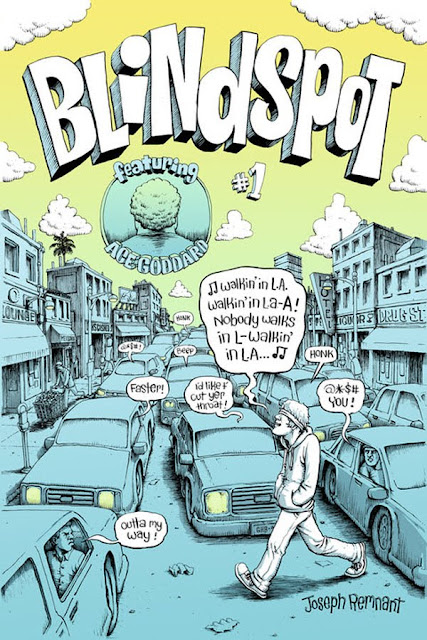 Words: Seth Kushner
Blindspot #1 opens with it's creator Joseph Remnant, clad in a suit and tie, sitting fireside next to a bust of Shakespeare. He uses this Masterpiece Theater riff to introduce the reader to his self-published effort, until the "classy" scene is broken in panel five by the out-of-panel cry of "Hey Fuckboy!"  As Remnant's roommate berates him, it's revealed that the narrator is standing on a set in what is actually a dilapadated apartment.

The scene acts as Remnant's way of creating and breaking the illusion of his being a successful cartoonist.  He says, "The fact is I AM just another desperate artist, begging for a scrap of attention and credibility!"
Remnant has gotten some deserved attention and credibility recently for his collaborations with Harvey Pekar in SMITH MAG's The Pekar Project.  As one of four artists bringing Pekar's latest everyman-autobio tales to life, Remnant's work has stood out because of how reminscient it is to R. Crumb's work.  Harvey's early American Splendor work with Crumb is iconic stuff and many (including me) would argue that Harvey's words shine the brightest when paired with Crumb's art, so Remnant's style feels perfect for The Pekar Project, in a way that seems both new and familiar at the same time.   Here, in Blindspot #1, the influence of Crumb and Pekar is clearly evident.  In the anthology comic's final story, "No One Ever Said it Would Be Easy," Remnant draws himself struggling to make it as an artist and aknowledges Crumb, referring to him a "genius."  I don't know anyone who would disagree.

I would never say Remnant is aping Crumb's iconic styly, but he is definitely from the Crumb school in how he designs his characters, his use of ink lines and his way of telling a story visually, and his subject matter and characters are clearly from the Pekar school. He casts himself as self-deprecating schlubby everyman, struggling to make it, while working at a dead end job. Sound like somebody else we know?  By no means do I think this is a negative thing.  One could find worse people to be influenced by than Crumb and Pekar, and my guess is that Remnant's work showed these influences long prior to his working with Harvey.

Remnant doesn't just tell stories about himself though.  He creates a memorable character in "Ace Goddard: Living Legend Part One."  Ace is a aging, fat toad of a man who was once a heavy metal god.  Scenes of Ace's attempts to reclaim past glory during a meeting with demeaning record company execs are intercut with flashbacks to his hair metal glory days and interviews with fans telling an off-panel reporter things like, "I'd have sex with him right now....and I'm not even gay!"

Other than the fact that there's a "Part One" in the title, I have no idea if Remnant has future plans for the Ace Goddard character, but I believe he could easily fill an entire graphic novel with Ace's exploits. 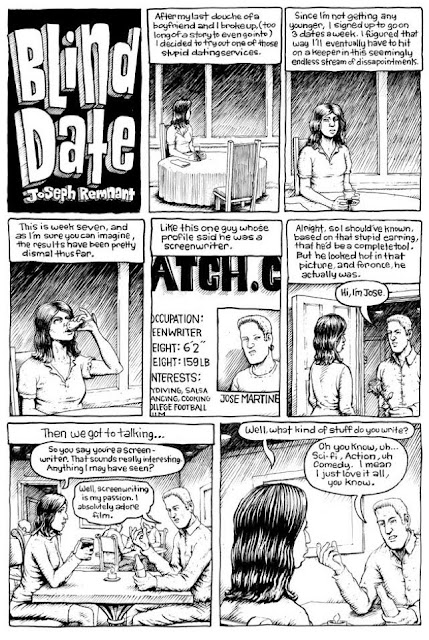 The remaining pages offer an entertaining mix.  "Blind Date" is a humorous take on a familiar situation as a woman meets several loser suitors.  "Good Mornin'" comments on corporate culture and "Art Show" follows a douchy business-type guy attempting to impress a woman at a gallery exhibition.

Finally, "Truths With a Capital T" is a mundane slice-of-life piece with Remnant once more casting himself in a record store conversation with a friend where he comments on the current state of music and how Rick Astley sucks.

Blindspot #1 is a fine introduction to a new comics creator and serves as an entertaining "paying my dues" work before he moves onto bigger things.

Remnant has a distinctive voice, if a somewhat familiar one to readers of Harvey Pekar and R. Crumb.  These skills will serve him well, I'd wager, in his first long-form graphic novel work, Harvey Pekar's CLEVELAND, a collaboration with the eponymous author due next year from ZIP Comics.

Blindspot #1 is available for purchase at Indy Planet. 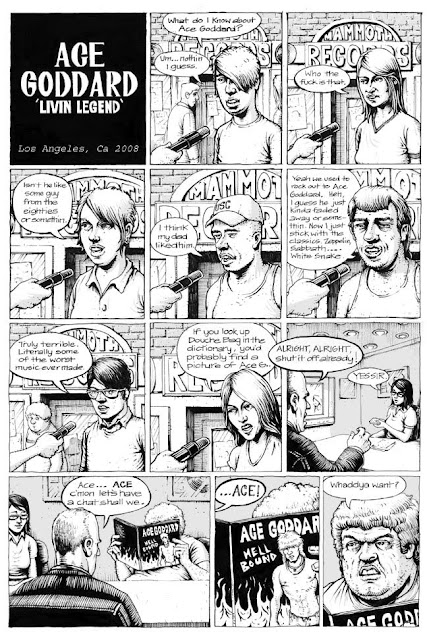 Posted by Christopher Irving at 9:58 AM