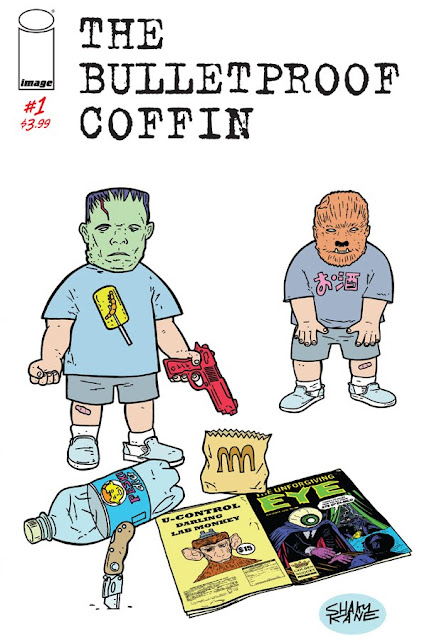 Words: Igor Glushkin
Haunting... Creepy... Macabre... and those are just the emotions that come out of the first issue of The Bulletproof Coffin.
At the beginning of the story we meet our main character, Steve Newman. Steve’s occupation is a voids contractor- someone who empties a house when the occupant dies without any claim. In an arrangement with his boss, he goes to the house at night and occasionally keeps any items for himself. One night, Steve stumbles upon more then just trash. He finds a stack of comics and an old spooky TV set that was no bigger then two feet squared, that provides viewing by inserting quarters. 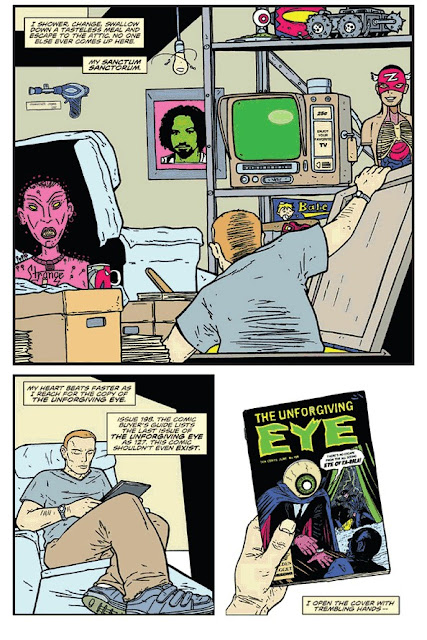 Steve's transitory existence is shared with an apathetic wife and his two kids. Being invisible to them, he escapes to the attic of his house or "SANCTUM SANCTORUM" as he calls it with his solitary enthusiasm for newly found items. He is also a comic book fan and memorabilia collector whose heart skips a beat when finding rare items.
After dinner, Steve begins to read one of the comics and the reader is instantaneously thrown into the alternative world of The Unforgiving Eye #198, the yet to be seen issue since the series was cancelled after the last known publication of #127. The creative team of David Hine and Shaky Kane of The Bulletproof Coffin are the same duo of the stack of comics Steve finds.
The inner comic book is a chilling tale of a guy who is hiding out after just committing a murder that is confronted by an all-knowing, cloak wearing figure with a huge eyeball for a head. The Unforgiving Eye portrays murdered victims, bondage, adultery, paranoia and psychedelic art. It completely feels like a throw back to the EC Comics from the 1940s and 50s such as Tales from the Crypt and The Vault of Horror. 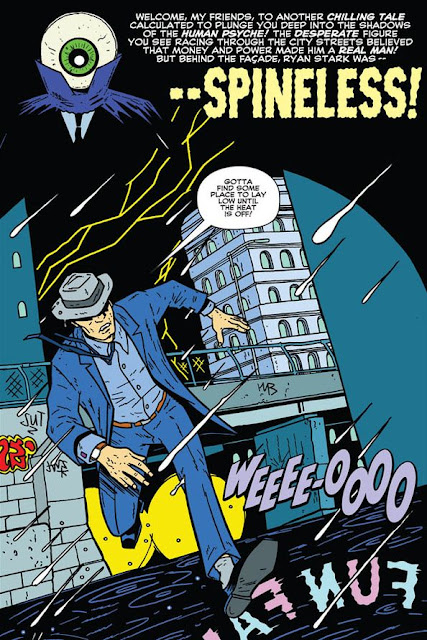 After reading The Unforgiving Eye and viewing bizarre murder footage of the man who owned the house on the small TV set, Steve’s curiosity brings him back to that same house…  and the most unsettling ending of this first issue.
Both stories, The Bulletproof Coffin and The Unforgiving Eye, are filled with Silver Age gimmicks like cleanly detailed artwork (reminiscent of  Steve Ditko’s art), surrealistically drawn panels, and stories that end with a twist.
The comic book has an overall creepy mood and the snappy dialogue plus its colorful, engaging panel’s keep the reader’s attention going at full speed. 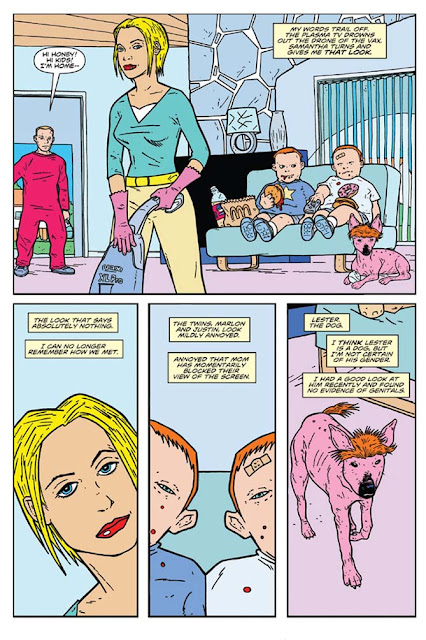 Even though Hine and Kane are new to me, both are well established in the comic book industry: Shaky Kane, aka Michael Coulthard, is a British writer and artist known for his independent work on Deadline in the 1980’s and more mainstream titles on Judge Dredd in the 90’s. David Hine has been writing and drawing since the 80’s as well, on such titles as Sticky Fingers and horror comic Strange Embrace and more current Marvel Comics titles such as X-men: The 198.
The Bulletproof Coffin #1 begins a haunting story where reality and fiction are blurred. A good read for any comic book lover for its good writing and well-collaborated creative team’s effort.
Igor Glushkin has been drawing since he was a child. With a Bachelors of Fine art, he has worked as an art director for various publications and advertising companies. Currently working as a freelance graphic designer, he has recently returned to his roots as an illustrator and his love for comic books. Igor is collaborating on a creator owned soon -to-be published comic book called Isolation.
He currently resides in both Columbus, OH and NYC with his wife and his collection of vinyl toys.
Posted by Christopher Irving at 8:03 AM