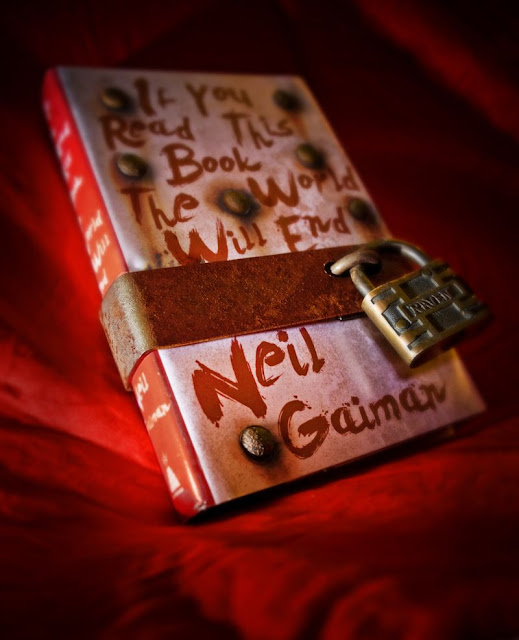 Picture: Seth Kushner
Designer extraordinaire Charlie Orr's Hypothetical Library has been a project of interest to us here at GNYC since it's inception earlier this year.
"The idea behind the blog was to create an opportunity for a part-time book cover designer to collaborate, with a wide range of amazing, contemporary writers on a project outside of their normal body of work," Orr says in his blog's intro.  "The catch is that these books will never really exist."   He elaborates - "I ask each writer to provide flap copy for a book that they haven’t, won’t, but in theory could, write, and then I design a cover for it."
This week's installment show readers the hypothetical cover for author Neil Gaiman's If You Read This Book The World Will End.  Teaming up with Orr is GNYC's own Seth Kushner, who photographed the constructed book seen in the photo above.


This week's entry has taken several months of planning, as Orr's concept required the involvement of: a sculptor/metal artist, digital print house, a locksmith, an audio engineer, a voice artist, and an html 5 programmer, (for an audio book, and an e-book cover which will be posted later in the week) a photographer, and Gaiman himself.
Other authors who's recently received the hypothetical treatment from Orr include; Colum McCann, David Lehman, Lydia Millet and Kierán Suckling, Thomas Kelly, Brian Evenson,and cartoonists Gabrielle Bell and Nick Abadzis.


Check out the Hypothetical Library every week for more creative book covers to book which will never exist.  Though, I hear Mr. Gaiman mentioned that he may want to actually write If You Read This Book The World Will End someday.

Posted by Christopher Irving at 7:45 AM