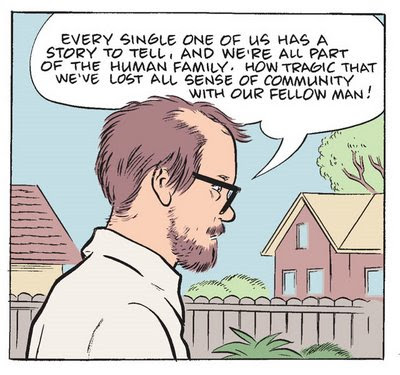 Words: Seth Kushner
Wilson is an asshole.  It’s a fact that is clearly evident on the first page of Dan Clowes’ new book, when the title character asks a woman passerby on how life is treating her.  She begins to tell him, complaining of her computer problems in detail, but Wilson cuts her off –
“For the love of Christ, don’t you ever shut up?”
Yep, asshole.  Throughout the book, Wilson

initiates conversations with strangers – a lonely man attempting to connect with his fellow humans - and then quickly makes the other person sorry he engaged in conversation.  Wilson moves through life insulting others as a means of validating his own jobless, family-less existence.  He has a dog he loves and a father dying, but little else. He seeks meaning to his life but has little patience to figure it out.  Sitting by the water, he waits for answers, finally getting up to leave-
“Fuck it, this is a snooze-fest.” 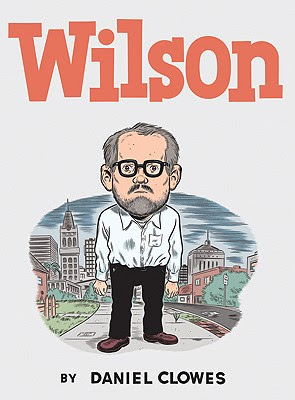 When Wilson’s father dies, he goes on a journey to reconnect with his ex-wife, and with the daughter he’d never before met.  Wilson is a very unlikable, but recognizable and human character.  His tale in nothing earth shattering, but then Dan Clowes books aren’t about shattering the earth, they’re about slices of life of relatable characters.  Wilson fits the bill.
Wilson is an experimental book for Clowes, as was his previous effort, Ice Haven

, and he takes some of the techniques employed in the earlier book even further here.  The cartoonist structures each page as if it were a newspaper comic strip.  There is a title on the upper right and the page is broken up into a clear grid.  Each one is a beat with set-up and punch line in the last panel.  It’s an interesting technique and not one I’ve seen previously utilized this way. The book can be read through as a narrative, or one could, I suppose, open to a random page and read on it’s own.  It almost has the effect of reading a strip collection, except the intent shines through. 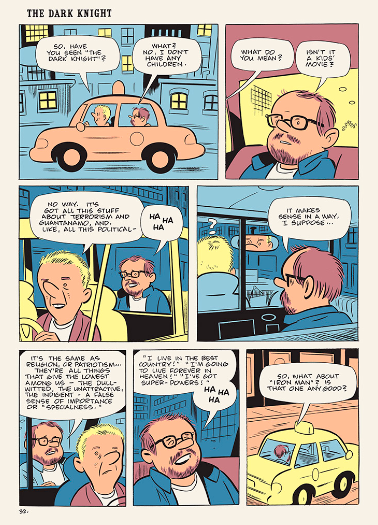 Also of an experimental nature is Clowes’ drawing styles.  I say “styles” because again as in Ice Haven, he utilizes multiple styles (approximately ten) in the book, jumping back and fourth between his recognizable “Dan Clowes” style to ones reminiscent of fellow indie cartoonists Ivan Brunetti, Charles Burns, Adrian Tomine, and others.  One might expect these shifts in art styles to be jarring, but Clowes pulls it off and the narrative flow of the book works.
My feeling is that Wilson is a book which needs to be put down and thought about and probably revisited a while later, in order to fully understand it’s subtleties.  But, even now, I can say that along with Ghost World

, Wilson is a fine addition to my Dan Clowes library.  Just writing about it makes me want to crack it open again. 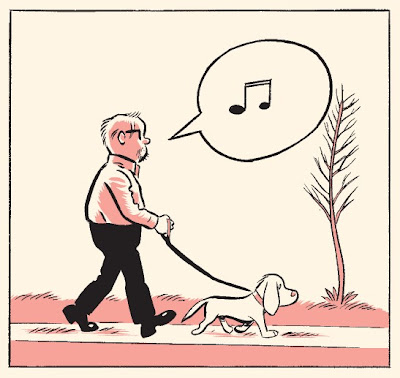 Posted by Christopher Irving at 7:13 AM