Neil Gaiman Has a Call 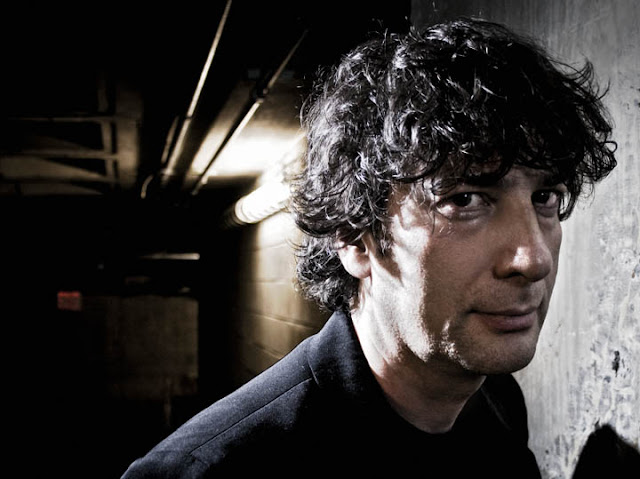 Words: Christopher Irving . Picture: Seth Kushner
Neil Gaiman, holding a cell phone to his left ear in the fluorescently-lit halls of DC Comics, walks right past me as I emerge from a stairwell. Wearing his trademark black clothes, he trucks on down the hall, heading to wherever it is he has to be. It’s February 21, 2007 (my thirtieth birthday) and, for the second time in my life, I have a near-miss with saying “Howdy” to the most influential writer in my life.


It’s not that I turn out pages of Gaiman-influenced short stories, or that I’ve dissected his stories for a magic formula to apply to my own writing – Gaiman, being ensconced in pop culture as he is, has indirectly (in a Kevin Bacon type of way) influenced my life from high school on. 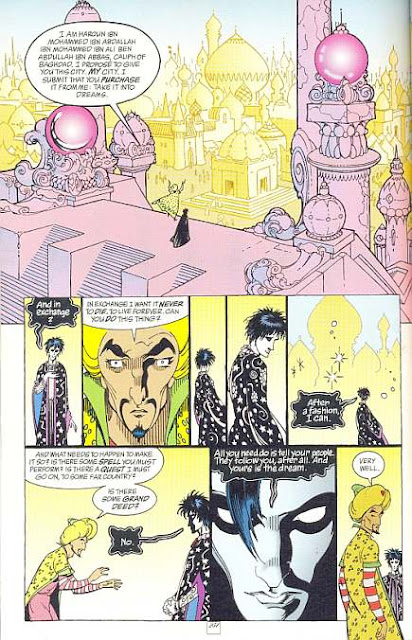 Sandman #50 begins my love affair with his work – the “Ramadan” story, drawn by P. Craig Russell – is pimped in Comics Buyer’s Guide as a jumping-on point for new readers. Like this 16 year-old social misfit in a cheap black trench coat in 1993, who walks a mile into the comic shop run by college students in his small town on an overcast Wednesday. The smell of the pages, the feel of the light breeze, my feet pounding across the pavement of Main Street and across the train tracks, over the Appomatox River Bridge, and up my sidewalk-less street I grew up on, stick in my craw half a life later. My best friend’s father saw me that day, nose in Ramadan while walking, and he declared “That boy’s going to run into traffic if he’s not careful.”

But I’m too far away from the quietude of Farmville, Virginia to care: I’m in the days of Aladdin, with part of me in the dreamland of Morpheus the Sandman, a tall man with skin paler than mine and coal black hair and eyes.

To say Sandman had an effect would be an understatement: I’ve never been a fan of fantasy, but Neil’s ability to make fantasy accessible and cool to readers is one of his strong points, especially in those Sandman issues. Soon, I became a voracious reader.

As did my brother’s girlfriend, Heather, who shows up with a small stack of newly minted Vertigo comics shortly before “Ramadan” comes out. We became comic buddies, bonding over our love of Neil’s Sandman, in particular. She’s the first girl who ever thinks I'm cool.

Months later, I meet my penpal Christine through a listing in a comics magazine. Why? She reads Sandman, and in a small town where I went to a comic book-hating high school, I reached out for a kindred spirit.

We write for ten years before we fell out of touch. But those first few years, getting and sending letters every week, are magical for me. We talk Sandman, and she introduces me to Neil’s short stories, Xeroxed out of books; mix tapes with her intricate handwriting and an illustration came periodically. Amongst them is Little Earthquakes by Tori Amos and, in the lyrics of “Tear in Your Hand” comes “If you need me, me ‘n’ Neil will be/Hanging out with the Dream King.’

Then, Neil pops up writing an issue of Spawn by Todd McFarlane…My favorite comic book artist (in my less discerning teenage days) and my favorite new writer?

I also get a black cat shortly after and the name I give him? Morpheus. 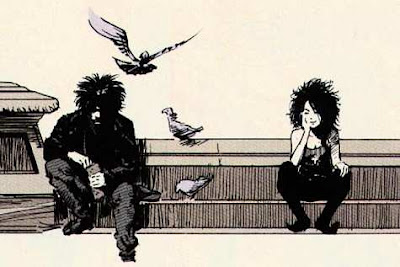 On to college, and Sandman is everywhere: the laid back tattooed guy down the hall, Wes, loans me his Sandman trade paperbacks and I catch up on them all Freshman year. Death t-shirts are everywhere, ankhs are dangling from necks (I’d just given mine, bought on a fateful family vacation to Maine a year prior, to my younger sister as a parting gift). A girl six floors below me loves Sandman, while Christine and I still write and exchange pleasantries about our changing lives and pop culture. Boys for Pele comes out on cassette from Tori Amos, and I scour the lyrics for a Neil mention. Sure enough, it’s there in “Horses”: “But will you find me if Neil makes me a tree?”

The ‘90s was an exciting time to come of age: the pre-9-11/Patriot Act/War on Terrorism country was an optimistic place, there were enough pockets of underground and alternative music to have something for everyone – and we felt we could do anything if we wanted (even just slack off; thank you, Generation X). Our President’s biggest offense was screwing around with an intern, a big deal then, but nothing in comparison to the special interests and illegal wiretapping of the Bush Administration. And, even though Sandman wrapped up in ’96 with Morpheus’ death, the trade paperbacks were still everywhere. 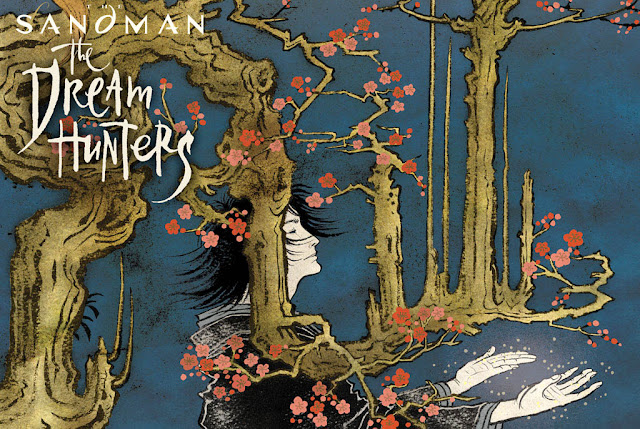 I was determined to work in comics and, in 1999, got my first trip to DC Comics as a graduation present. I walked back to the train at Penn Station with a copy of the graphic novel The Sandman: The Dream Hunters.

A few years later, I’m sitting in a restaurant in San Diego (during the Comic Con), and there’s Neil having lunch with some friends. Since I consider bothering people when they’re eating about as unforgiveable an offense as bothering them when they’re on the can, I hope for a time when I can have an excuse to bump into him – like an interview for one of the magazines I write for.

But it never happens, and Neil continues to pop up everywhere. My penpal comes down to see me and gives a present of a new CD – a group that plays her hometown of Boston called The Dresden Dolls. I dig the sound, little suspecting that years later songstress Amanda Palmer and her husky voice would become engaged to Neil.

(That’s also the fateful trip where I have a shocking encounter with my mortality upon seeing the wreck of my old car from the week before, and completely ruin a great friendship by being a self-centered ass. But that’s a story for another place and time…) 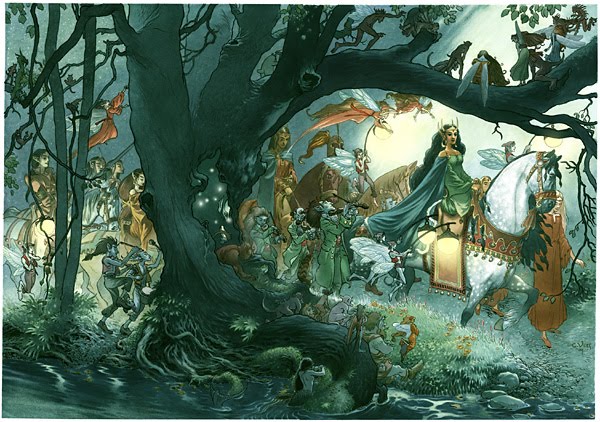 Neil keeps writing books, and I keep buying them: American Gods. Anansi Boys. Stardust (with the amazing Charles Vess on art). And he still pops up places.

My college professor mentor, it turns out, once went on a book tour with Neil.

A friend brings over some DVDs to watch: the BBC mini-series of Neverwhere.

I interview Peter Bagge, who does a sequence in his short-lived comic Sweatshop where Neil’s pants are set aflame by a crazed fan. Neil’s agent asks they use the word “trousers” instead, with Neil being English, and all.

Neil links to Gay Talese’s Esquire essay "Frank Sinatra Has A Cold" and, being a huge Frank fan, I read it and am even more moved by Talese’s writing. Soon, I reinvent my writing about comics to take a more new journalism slant, thanks to reading that piece.

I interview Neil’s collaborators, like Charles Vess and Kelley Jones, and I see Tori Amos play three times (two of which I review), but the opportunity to talk to Neil never presents itself. As a journalist, I want to pick his brain on everything from Sandman to favorite fountain pens and, as an admitted fan, I just want to shake the man’s hand and say hi.

And I’m back at DC Comics that fateful day two hours after I officially turned 30, coming out of the stairwell with an editor, and I missed my chance to do the latter. Because, after all, I consider interrupting phone calls a rung or two below the aforementioned bothering people at lunch or in the can.

The next year, Neil gives a reading at the New York Comic Con for the Comic Book Legal Defense Fund. Backstage, my future partner, Seth Kushner, snaps Neil’s (reportedly) favorite picture of himself ever, one that becomes his author’s photo on all the upcoming Sandman trades.

I ride the Chinatown Bus home and a pirated version of the Neil-scripted movie Beowulf (in blurry 3-D) plays repeatedly on the DVD player the whole ride down to Virginia.

That same professor friend of mine invites me to sit in on a comics panel at my alma mater; it’s on Neil’s comics work, and I’m more versed in the newer stuff, so I sit in as back-up.

I see Doctor Who head writer and mastermind Steven Moffat at the Apple store, shortly after it’s announced that Neil is writing an episode of Who. 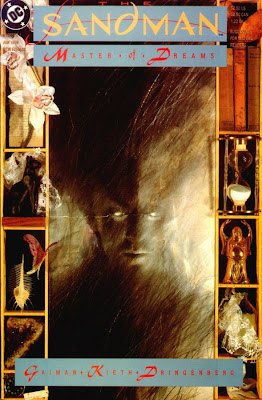 Since reading my first issue of Sandman, Neil Gaiman has gone beyond that memorable series; he’s more than a posterboy for black clothing, he’s a pop culture figure whose influence has gone beyond the cult and into the mainstream. With Graphic NYC, I now have an excuse to interview him, and hopefully soon.

And he might even get another new favorite photo out of it.

Written with apologies to Gay Talese.
Posted by Christopher Irving at 11:57 PM