Graphically Speaking: The Unclothed Man in the 35th Century AD 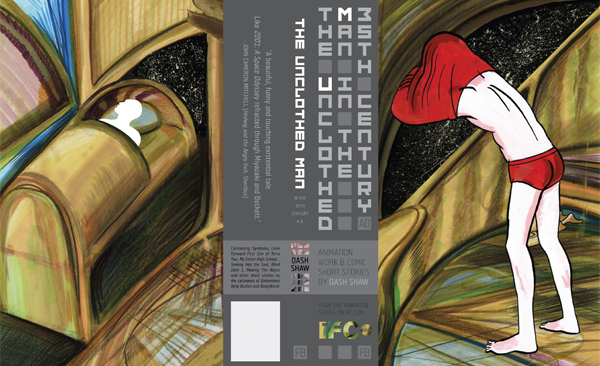 Words: Seth Kushner
I first saw Dash Shaw’s work when I flipped through his 2008 book, Bottomless Belly Button at that year’s MoCCA Fest, where it was one of the buzz-worthy new releases.  Just browsing at it at the Fantagraphics table didn’t convince me to pick it up.  Sure, its 700+ page length was certainly audacious for a debut book, but the art struck me as simplistic.  All of the positive reviews got me to pick it up a few months later and then, while actually reading it did I get what all the fuss was about.
Shaw employed a style of art in Bottomless Belly Button

, which could be considered simple, but it’s what suited the story he was telling.  The book had a unique and thoughtful narrative flow, which would have surely been hindered by a more “rendered” art style.  I was struck by the poignancy of the story of the Loony family and of Shaw’s understanding of human nature, especially coming from an artist so young.  But, most impressive to me, was Shaw’s sense of design.
Which brings me to his recent book, The Unclothed Man in the 35th Century AD 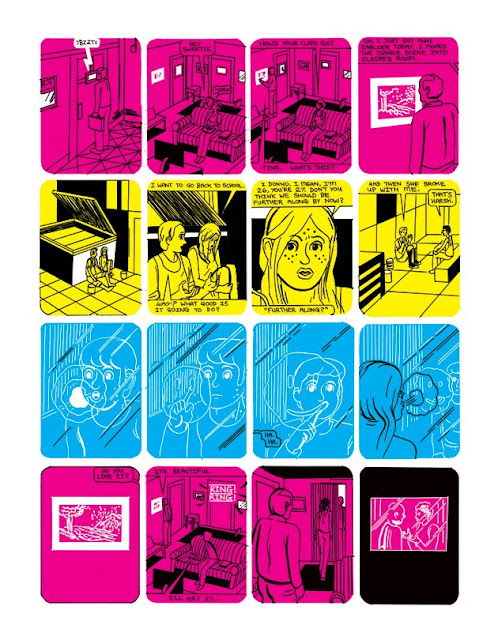 Design is key in Shaw’s new book.  Book design in general is something I’m very interested in.  One might even call me a “book design nerd.”  Picking up The Unclothed Man, one cannot help but be impressed by it’s forward-thinking design.  An acetate cover wraps around a textured hard cover.  The book’s title lives on the acetate, along with the figure of a man in his underwear removing his shirt.  The man interacts with the scene printed on the hardcover underneath, where a woman on the book can be seen through the man’s opaque back.  Flipping to the back, the white silhouette bust of a person floats along on acetate, but lies in a sleeping chamber printed on the book.  In the front inside flap, a bathrobe-clad bald man is seen above a painting of a colored. Obscure landscape, and in the back flap, a couple is treading water in a scene reminiscent of the end of Titanic, while printed below them is a beautiful palate of blues and yellow.
Design credit is given to Shaw himself and designer Jacob Covey, who designs many of Fantagraphics best looking books, including the recent Gahan Wilson

and Bottomless Belly Button.  He and Shaw are a good match, as Dash is clearly interested in design himself. 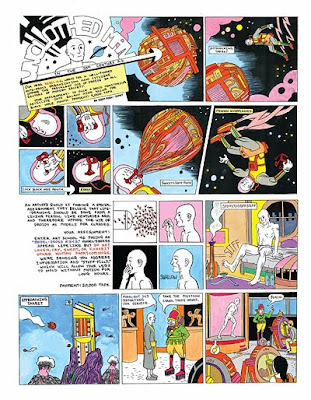 As the reader is informed at the beginning of the book, it is divided into two sections.  The first contains storyboards and comics from the IFC.com series of the same title as that book, which Shaw worked on.  The rest of the book is filled with his short comic stories, which mostly appeared in the anthology, Mome.  The storyboards act well as comics and can be read as such.  The comics for the Unclothed Man have a lose retro-futurist style and use bold colors and panel design.  These and the comics in the later section are clearly experimental.
My favorite of the shorts is probably 'My Entire High School…Sinking into the Sea."  Panels and colors bleed together to create a fever dream-like effect, as Dash himself and a girl named Mary desperately struggle to survive their sinking school.
Also notable is "Blind Date 1," where Shaw adapts an episode of the TV dating show, Here, he employees a painterly technique of greens and blues, and through his fine-art approach and storytelling, he exposes the ridiculousness of the show. 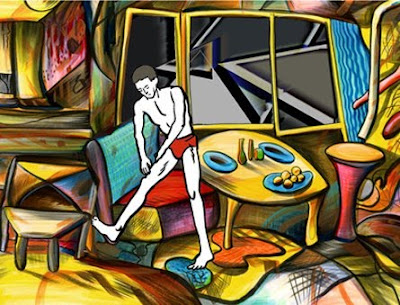 It’s the experimentation of the work found within (and without) The Unclothed Man in the 35th Century AD, which excites me the most.  This is the work of a young artist who is playing with arrangement of panel, with color and form, and coming up with his own thing.  The influences of Shaw’s noted SVA instructors, David Mazzucchelli and Gary Panter, are clearly felt, but the young artist puts his own spin on the work and it feel refreshing.
There lots to appreciate in this collection of avant garde comics.  It should serve a fine bridge between Bottomless Belly Button and Shaw’s next book, Body World 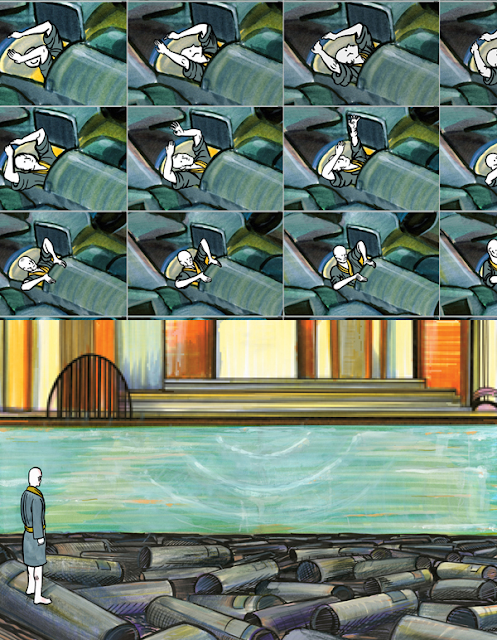 Posted by Christopher Irving at 11:31 PM