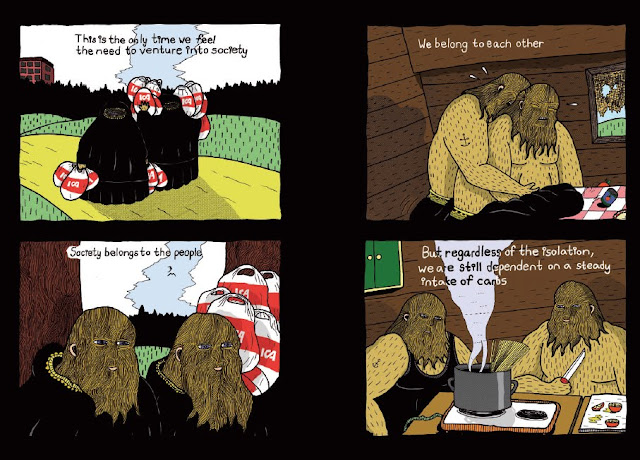 Writer: Jared Gniewek
Sometimes the act of reading a piece of fiction is a journey unto itself. Folks say that, and it brings to mind lame pictures of Kirk Cameron in a sweater looking laid back with a copy of The Lion the Witch and the Wardrobe resting on his knee and Captain OG Readmore lurking over his shoulder like a stalker and some pastel drawings of dragons flying up and out of the pages. It's cliche' and I'm one of those guys that loves when he can coldly and unironicaly drop a cliche' and have it work. The Troll King takes you on a journey. Read, explore, fuck dragons...you won't be the same afterward. Reading is Awesome (right Kirk?).

Upon cursory glance, the book seems very simple. At first I thought it needed a bit more concrete verbage but as it worked its spell on me, I started to feel that the light airy text was just what it needed to maintain balance. It is a graphically sparse book lovingly crafted in a sort of overt primitivism that would be shattered by too many words. The textures are intense yet their density in contrast to the fatness and weight of line makes it seem reserved. It never feels "noodly" and builds on itself, compositions of carefully weighted line and color that look just stunning. One could get lost in the swirling lines of a tree trunk or beard. There is a rhythm and pace to the book that keeps you grounded and breathing sweetly as you roll through the stories. 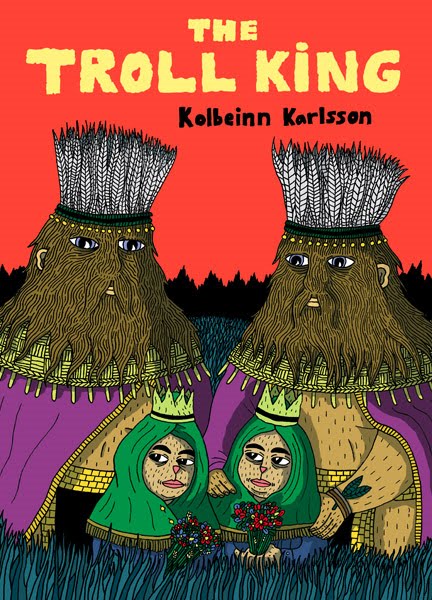 These stories, however, do not fall into typical story territory. You lovers of post-Campbell revisionist folklore might not be impressed nor will those of you who feel the need to graph everything they read into charts of story arcs and character development.  But for those of who love the allure of the transformative aspects of the tales that don't fit into traditional narrative -- stories that are at once allegorical and ultimately literal on a root level, the stories in this book will work quite nicely for you. You may indeed find yourself thinking of moments from it for weeks after reading. It feels much closer to the primordial stuff of actual fables and folklore than, say, a Vertigo book. Thematically (although not really graphically), I found it hod a lot in common with stop motion animation. Genre-wise it falls somewhere near surrealism in the vein of Jan Svankmajer or The Brothers Quay.
This is the real shit. The stuff that lets me know I'm not alone. Weird but honest. This is the fantasy that don't need no swords or battles. The forest, the roots, the savage lack of understanding of community or of the natural world. Karlsson is plumbing depths of imagery that seem familiar yet alien. His work seems like the type that others will go to for inspiration before commodifying his style into something more marketable. Read it while its pure. 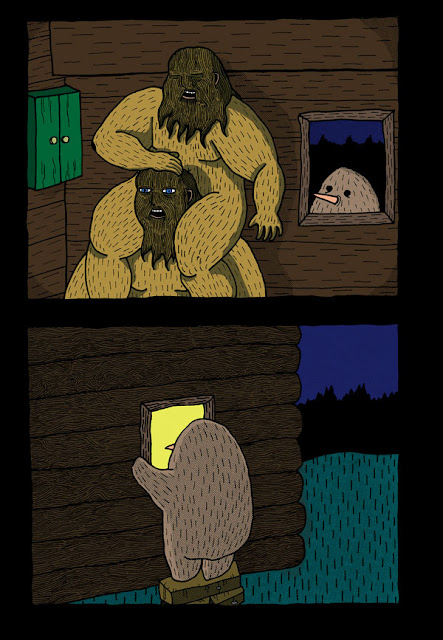 The swarthy "ewok kings" of the beginning and end of the book are a wonderful subversion of carnival motif of the animal-man (eg JoJo the Dog face boy or today's Wolf Brothers) by taking such an iconic type (not to mention namimg them after the adorable creatures form The Return of the Jedi) and making it work as brothers to the real larger more fantastic world of the forest. They dress in burkas to go shopping and are weighed down by the piles of plastic bags with grocery store icons on them. They exist within along side and ultimately as part of this savage and strange world. It is a story of withins and withouts. The nature of community.
The sheer joy of the tales is in the telling. The absolute grandeur and beauty of some of the moments would bring tears to a giant and make dragon pups sing underwater songs to shadows of ships passing over. The middle section is by far the furthest into this territory of fantasy spectacle, when a man dreaming on black water is brought before the forest king and made a mount to him. He cries tears of joy. I did too.
The art is a little design heavy for me in places and more emphasis on story crafting couldn't have hurt the book but if this is the voice that Karlsson uses (and I imagine he is a very very purposeful creator) I'll take it. I don't even need a poster with a teen idol to tell me to. Reading is Awesome. 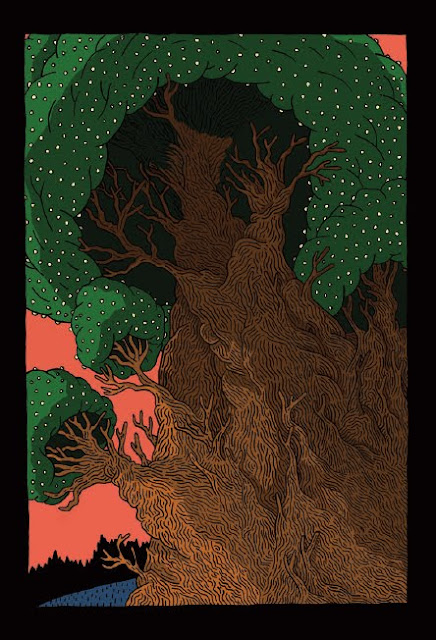 Reviewer Jared Gniewek joined Graphic NYC with the site's relaunch in September, 2009. Jared has worked in the music industry as a back line technician, performer, and promoter. He has also been a freelance writer whose work can be seen in the recent re-launch of Tales from the Crypt and heard on The Dark Sense, an audio anthology of the macabre for which he is also the story editor. Jared’s blog, Die By The Pen, outlines his philosophies and personal quest as a writer. His cartooning can be found on his blog Scary-Oke, a monster indy cartoon karaoke game stemming from his own twisted mind.
Posted by Christopher Irving at 7:23 AM