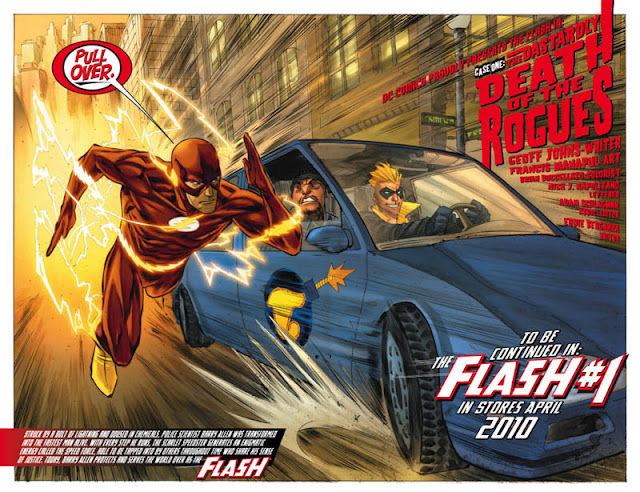 Words: Christopher Irving
A mile from my house growing up, there were three spinner racks I used to frequent for my comics on Wednesdays after school. The modest stack usually sat in the flat paper bag for the walk home, except for The Flash, which I read while walking home.
I’d loved the show, ill-fated to last just one season, and it turned me into a diehard Barry Allen fan, when Wally West was fighting to dig out of the whiny loser category. He did, with the help of William Messner-Loebs, but it was Mark Waid who made Wally my favorite Flash. I walked to the store then. When Mike Wieringo came on as penciler a few issues into Waid’s seminal run, I started running.


Geoff Johns and Francis Manapul’s brand new relaunched The Flash have a similar effect that those Waid and ‘Ringo issues had on me back in the ‘90s. With ‘Ringo’s departure, the book held on with several good to great artists, but none with quite his level of dynamics. Manapul’s alive, kinetic art, clean but not too precise, loose without being sketchy, convinces us Barry Allen really is the fastest man alive.
Since both The Flash and Barry Allen have left Central City (the cover story is F.B.I. relocation), it’s become possessed with doing things faster rather than better. The worst example is the stack of cold cases waiting for Barry in Central City P.D. Determined to solve these dormant cases, The Flash quickly learns that there are more than enough crimes happening that need wading through before he can get to the cobwebbed ones. 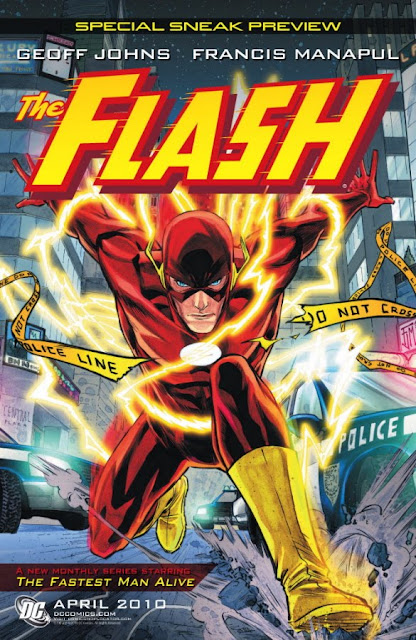 His relationship with wife Iris remains intact, the humor that only fits in between the main action of the story reminds us just how little time Barry has for her. They also, for a couple that are old enough to see a kid sidekick grow into a young man, have suddenly been de-aged. Maybe it’s Manapul’s visual leanings, but the two are drawn far younger than portrayed years before. Perhaps it’s also an attempt to keep Barry Allen from seeming like your father’s hero, or from becoming too square, but I have to cringe when I see Manapul dressing Barry in a leather jacket and hoodie sweatshirt. This is dorky and endearing slowpoke Barry Allen of the tweed jacket and bowtie, so why is he dressing like a reject from a back issue of GQ?
Geoff Johns really knocks it out of the park on this one (far better than with the disappointing and too-long Flash: Rebirth mini-series) giving an accessible and action-packed first issue. With Green Lantern, he gave readers a reason to love Hal Jordan through the character's personal journey; from all I’ve seen, he’ll do the same for making Barry Allen the best Flash around.
Posted by Christopher Irving at 9:58 AM