Dick Giordano: It Had to Be For Love 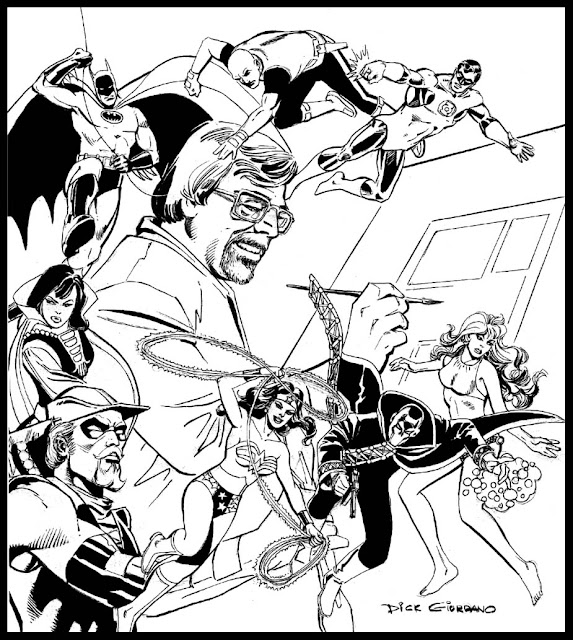 Words: Christopher Irving
“From what I’ve learned, you get your best from people by letting them do what they did best,” Dick Giordano said in 1999. “Sometimes it’s just a matter of choosing this person and letting them alone. What basically sums up my editorial policy is to hire the right person for a romance book, and he’ll do a damned good romance book, or whatever the subject matter.”


Dick Giordano’s contributions to editing comics are just as great (if not, arguably, greater) than those he made as a penciller and inker. With a career that started in slow-moving 1951 and continued into the early 2000s, Dick’s impact on comics are superficially like the mild-mannered and unassuming Giordano himself was. Whether he was working at a second-rate publisher like Charlton, or a big company like DC Comics, he gave it all his best and created some memorable comics in his wake.

When Giordano started in comics, it was with Jerry Iger’s comics packaging studio, where Dick drew books for publisher Fiction House, well known for their bevy of scantily sci-fi and jungle ladies. It wasn’t long after that he landed at Charlton Comics in Derby, Connecticut.

Charlton was an interesting publisher: started by two men who met while sharing a prison cell, the company paid the lowest rates, yet offered an unlimited amount of work for their freelancers. They also had an unusual set-up, with everything from editorial to publishing and distribution under one roof. The comics put out by Charlton were, mostly, crap, but it was a small pond for anyone to become a big fish in, and Giordano found himself inheriting the Editor-in-Chief position by 1968. While spearheading the comics line at Charlton, Giordano discovered and cultivated writers and artists that would impact comics in decades to come, including Jim Aparo, Denny O’Neil, and Steve Skeates. He needed the extra help, especially considering the vast amount of comics titles he’d inherited.

“There were times where he couldn’t possibly read everything that came in at Charlton,” writer Steve Skeates recalled in 1999. “At Charlton, he would more or less trust us to be on our own and do our own thing, which made Charlton a much better place to learn how to do your own thing. If you did something wrong, an editor wasn’t going to change it and it would get out there and embarrass the hell out of you.”

Giordano’s pet project was to give Charlton a superhero presence in 1966, which he did through a combination of reviving old Charlton superheroes like Captain Atom and Blue Beetle, and introducing new ones like Judomaster and The Question. Referred to as the “Action Hero” line (a term coined by Giordano himself), these heroes owed more to their pulp progenitors, and even more to Charlton’s prodigal son, returned from his stint co-creating Spider-Man at Marvel Comics. Steve Ditko contributed a new Blue Beetle, art chores on Captain Atom (an atomic-powered hero he’d initially drawn in the character’s first incarnation), and the Objectivist hero The Question.

“Contrary to popular belief, the office atmosphere of Charlton was fun,” Dick noted. “The people that were working there were doing things they enjoyed working on. This is something that I've carried with me since, as a way of working: I found there that no one was making any real money, but everyone was having fun since they were given a free hand. One of the things that I learned and used as an editor (and later editor-in-chief) at DC, is that very often, having control over the material is more important than getting paid well.”

And Charlton paid far from well: they were infamous as the skinflints of the comics world but, with an industry that was often hanging on by its fingernails, they were a refuge for many-an out of work artist or writer. With a combination of old pros and eager new talent working under him, Giordano developed his skills in editorial diplomacy while finessing his legendary ink line.

“Working with Dick back then as an editor was a miraculous experience,” writer Denny O’Neil said. “I’ve only worked with two or three editors in my life who could do what he did. He never gave you very much direction, or told you what to do or what not to do. He just, by the force of their personality, elicited good work, and you didn’t want to displease him.

“We were working for pathetically bad money, even by the standards of the sixties: four dollars a page. Yet, I don’t think that any of us ever hacked. You just didn’t think it would be the right thing to disappoint him and not deliver your best effort, and I don’t remember him ever giving me anything resembling a direct order. He was just gently encouraging and elicited, rather than demanded, good work.”

It should come as no surprise that, shortly after in 1968, DC’s new editorial head Carmine Infantino brought Giordano over. It was a coup for DC, especially since they got a new talent pool out of it, along with the prolific artist and inker. One of Giordano’s greatest strengths, according to Skeates, was his willingness to accept any of his own shortcomings and handle them in a positive way with his talent:

“One interesting thing was that he encouraged me to overwrite. Like Ditko and Kirby, he knew that he didn’t have an ear for dialogue either, and he hated to add dialogue to anybody’s script. He liked the fact that I erred on the other side, and all he had to do was take things out. He never had to add to my scripts, because they were always too verbose. 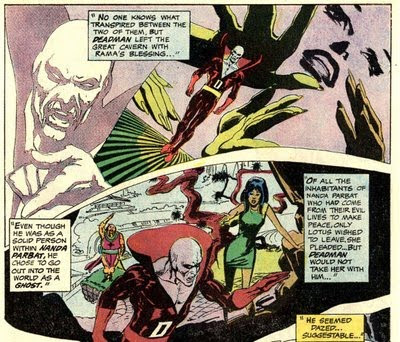 Starting Continuity and Associates with Adams, Giordano packaged comic book stories, illustrations, and ad material. Not one to burn bridges, Dick maintained a freelance relationship with DC, becoming one of the main artists on Batman for a long stretch through the ‘70s. His pulp sentiments, as well as his mastery of light and dark made the Caped Crusader a perfect fit for him (especially when sharing art chores with Adams), and it was an association that served Giordano for decades afterwards.

Several up and coming artists walked through Continuity’s doors, and it also soon became a social hub of the comics community. Dick and Neal must’ve been a helluva pair: the calm and gentle Giordano contrasting with the rash and hotheaded Adams, one nurturing and gentle to new talent, while the other a believer in tough love, maybe giving off an ever-present good cop/bad cop dynamic. After Giordano left for a return to DC Comics in 1980, as editor of the Batman books, Adams maintained Continuity, where he successfully remains today.

By 1981, Giordano was boosted to Managing Editor, and then made Vice President/Executive Editor two years later. Despite the extra responsibilities hoisted upon him, Giordano couldn’t let go his love of crafting comics, and was sure to make the time.

“Dick was an excellent illustrator, and a very good artist,” former Charlton head writer Joe Gill said. “He lives for his art, and he couldn’t live otherwise. He likes to work, all the time that he was the most powerful editor at DC, he would get up at 2:30 to work at home before going to the office, from his home in Bridgeport. He would get up at 2:30 and work for three or four hours. That had to be for love.” 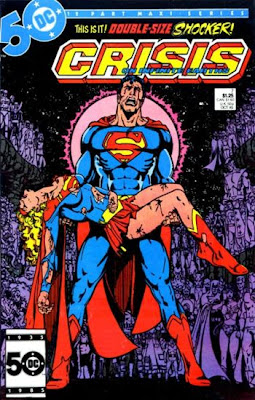 It’s at DC that Giordano makes his biggest impact on comics: under his editorial eye, the DC line was revamped in 1985 with the unprecedented meta-fiction crossover Crisis on Infinite Earths, resulting in a jumpstart and revamping of the entire history and line of comics. Amongst these changes were John Byrne’s revamping of Superman in The Man of Steel, George Perez’s more mythological take on Wonder Woman, as well as Frank Miller’s legendary Batman origin story Batman: Year One (and who can forget Miller’s The Dark Knight Returns? Also under Giordano’s tenure). The most personal change was when DC procured the Action Hero characters Giordano had spearheaded back at Charlton, and integrated them into the DC Universe proper.

When Alan Moore and Dave Gibbons proposed a book using those characters, titled Who Killed the Peacemaker?, Giordano had them create their own versions of the cult characters. The result was Watchmen, the landmark 1986 twelve issue series that brought a new level of sophistication to superhero comics, yet inadvertently inspired the “grim and gritty” movement in comics.

Giordano left DC in 1993, upon the death of his wife and his own gradual hearing loss, and went into semi-retirement. But, being Dick Giordano, “semi-retirement” involved him actively working in comics, as either an inker or penciller. With partner Bob Layton, Dick revisited the Charlton characters in The L.A.W., and even tried his hand at publishing; Future Comics debuted in 2002, with writer David Michelinie, penciller Giordano, and artist Bob Layton. Aside from a failed yet ambitious initial sales plan, of selling directly to readers and shops (rather than through distributor, Diamond), Future came at a bumpier-than-usual time in the industry. Attempts to sell through Diamond, as well as other circumstances, forced the company under by 2004. Giordano and Layton continued to collaborate on the online strip Colony, while Dick maintained a working relationship with longtime Charlton friend Frank McLaughlin on ComicMix’s White Viper strip. 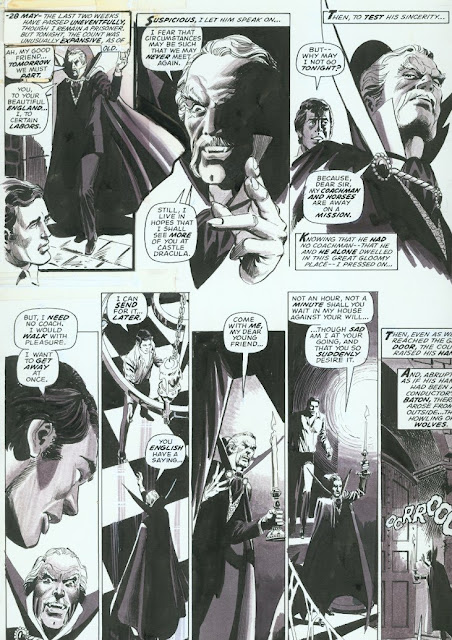 Giordano finished an uncompleted project in 2005, thirty years after starting it: he and writer Roy Thomas began adapting the Bram Stoker novel Dracula as a serialized comic book in the 1970s, and were unable to finish when Marvel Comics canceled the magazines featuring the adaptation. Cast in solid blacks and gray washes, Giordano’s art on Dracula was a lost gem, and he finished the art chores years later. Like several veteran artists, there was a difference: his pen and brush line was now more whittled down, a focus more on the form than detail.

Towards the end, Dick Giordano was practically deaf, yet he still gave interviews (but mostly through mail or email), and still made it a point to go to conventions to meet his fans.

He was, clearly, about people.

That’s what made him such a vital figure to comics: because he knew and understood people. Working in a period when most comics editors were fans turned pros, many of whom imposed too much of their own vision on the creative talent, Dick let his people do their thing as professionals. In a time when industry editors and writers were determined to write the comics they grew up with, he showed his love of comics without an elevated reverence that got in the way of change, and helped usher in a much-needed something new.

And maybe that’s where today’s mainstream comics are suffering: there aren’t enough Dick Giordanos working in those comics today, folks who aren’t scared to let others break long-used molds and come up with something entirely different.

Learn more about Dick Giordano at dickgiordano.com.
Posted by Christopher Irving at 1:21 PM