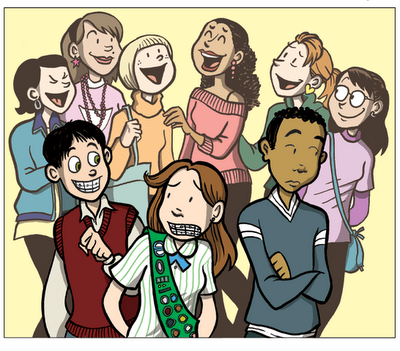 Words: Jared Gniewek
Being that I am a “rockin’ cool uncle” in the great tradition of Uncle Jesse, Uncle Fester, and of course Uncle Scrooge, and am also a believer in the gifting of appropriate comics to the niece-icles, I am always on the lookout for graphic novels and comics that the girls will look at for a few minutes then drop on the floor before we start drawing monsters and playing Dungeon.  And I hope after I leave that they pick them up off the rug and enjoy them but I don’t push. You know when planting seeds… too much water’ll kill the plant.

That being said, I thought Smile

would be a good read with a positive message for my older niece-icle as  she prepares for the Hell of Middle School in a few years while still having fun colors and good facial expressions for my younger niece-icle. I figured, as long as there was no Hannah Montana or ICarly or Salute your Shorts or whatever the kids like these days in there it had to be good.

Raina Telgemeier draws simple expressive figures and crafts smooth comics so I assumed it had to be solid. And every kid feels weird in their bodies, it’s part of the age, it’s why I love horror. So you know a kid will relate to the happenstance that led to years of dental pain for this girl.  A comic you can feel good about giving. Warm fuzzies all around.

Well, I was drawn in far beyond my initial expectations as nostalgia… scratch that—let’s give that puppy a capital N—Nostalgia  took over. Nostalgia (capital N) compelled me to thinking about those tender years in my own life. Those brutal and sad 1988-1991 years where the greatest thrill was conniving my way into getting my Mom to spring for the laser background for school picture day. And friends, of course, they are still my best friends. Great bunch of guys. 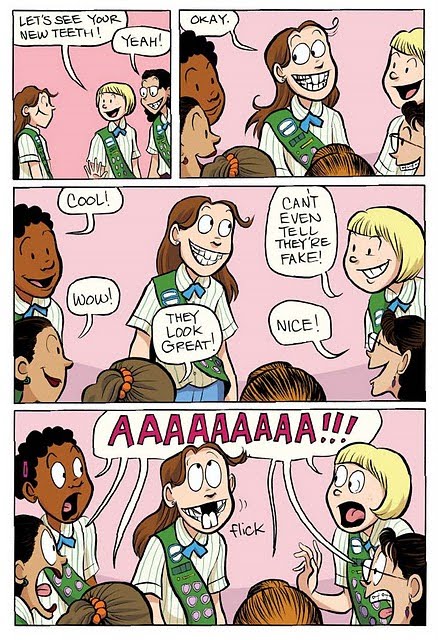 Raina Telgemeier keeps great details regarding that era in the text, but it isn’t just surface. The love/hate relationship with Nintendo that epitomize our generation is one example. It really was as important to us as our parents in our day to day lives. I didn’t even have one and it was bigger than Jesus in our house. The loving way she shows her childhood self thrilled that the lava boots in Wizards and Warriors was working, or one scene where she, in the pain of adolescent public  embarrassment consoles herself with my good friend, Mario. Her drawings of the fashions of the time is dead on, when she receives her horrifying makeover the look is exactly the type of nightmare that one would see center stage in a Barbie Dance Club Video or New Kids on the Block Pay Per View special.
The quiet way she depicts pop culture icons as a part of daily lives of kids of this age is awesome (or even radical, dude). As examples, the nods to The Teenage Mutant Ninja Turles drawings in year books, Bart Simpson T-shirts, and the unavoidable Little Mermaid. It’s funny to note that The Little Mermaid was the movie that made me hate Disney in my teenage years (I despised their entire rennaisscance at the time—I wasn’t exactly an expert, I thought that animation had peeked with Heavy Metal) yet it (and more commonly) inspired Raina to pursue animation.

Finding the connective tissue with someone of my generation who really remembers how it went down is awesome. In that regard, it reminded me of Mike Dawson’s Freddy and Me

The narrator swings in and out of the book fairly unobtrusively, commenting just enough to put things in perspective. I found a couple of places where I wished the narrator hadn’t swung in, or would have swung in a little more seamlessly. But that’s part of the aforementioned wrestling match when designing a story rooted in personal experience.  I found her restraint in this regard overall to be admirable. 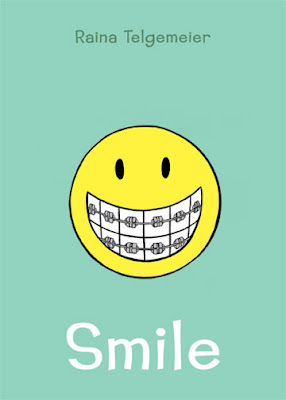 The character designs were strikingly effective. The page compositions were very plain and  I couldn’t help but think about how much I preferred this book to Persepolis

in many ways. I imagine nostalgia (capital N) has a lot to do with that but I just found it less assuming and grand. Using Manny Farber's dualism, I would say that Smile is an example of Termite Art where as Persepolis tends to be White Elephant Art. While not as bold as or graphically composed, it does tell a similar story of learning to accept yourself while the world around you is in chaos. Certainly not the chaos of international affairs interfering directly with a young girl’s life but the alien strangeness of the adult world…and the dental industry hovers over the book like a shadow.

We don’t get to pick our giants; we only get to slay them. I think that a life’s experience is always valid and the use of metaphor to draw a larger picture through the focus of as tight a lens as the experience of a tween in the US in this era was just as “important” as Sartrapi’s youth. How any story can be more “important” than another is beyond me but Persepolis seems to be the Fisher Price graphic novel for librarians and teachers who think Maus a bit too bleak.

In any case, learning to stand up for yourself and find the strength of self awareness is universal and empowering for both the Rainas and the Robocops (he only got the big gun after he found out his name) of the world. I did a flip when she [SPOILER ALERT] dumped that gang of frienemies and found her own rhythm of living. Sometimes, I know how it feels to feel okay in your skin and this book reminded me. Still, they will probably never make an American Girl Doll of 1989.

Reviewer Jared Gniewek joined Graphic NYC with the site's relaunch in September, 2009. Jared has worked in the music industry as a back line technician, performer, and promoter. He has also been a freelance writer whose work can be seen in the recent re-launch of Tales from the Crypt and heard on The Dark Sense, an audio anthology of the macabre for which he is also the story editor. Jared’s blog, Die By The Pen, outlines his philosophies and personal quest as a writer. His cartooning can be found on his blog Scary-Oke, a monster indy cartoon karaoke game stemming from his own twisted mind.
Posted by Christopher Irving at 10:57 PM