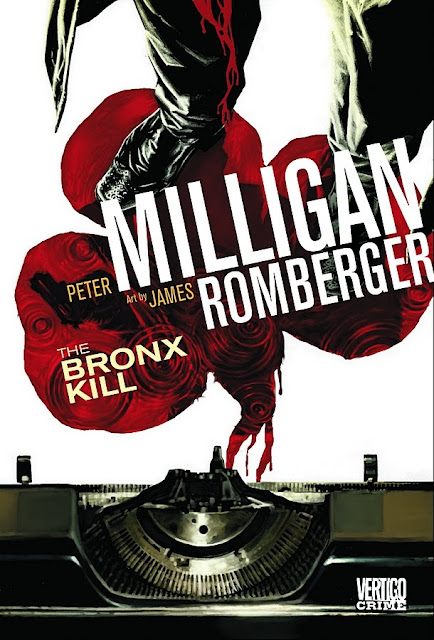 
With Sunday night’s Academy Awards still fresh in my mind, I just couldn’t resist beginning this piece on the latest Vertigo Crime graphic novel with an Oscar-themed analogy.
Peter Milligan is to comic book authors as Glenn Close is to feature film actors.
Both are highly-skilled artists, and both have won the respect of fans and peers the world over.  Both have never shrunk away from addressing challenging and very adult themes in their work, and in taking on those challenges have raised the bar for their colleagues in the process.  Both have been dizzyingly prolific, working across a vast breadth of genres and styles in their chosen milieu and producing consistently excellent work for nearly three decades.
Both are also very much underappreciated.

Like Close, who was nominated for an Academy Award five times but never took home the prize, Milligan is someone whose considerable contributions have been often overshadowed by those of his contemporaries.  Milligan arrived on the American comics scene as one of the last of the crop of talented UK-born creators recruited to DC Comics in the late 80’s and early 90’s that came to be known as “The British Invasion.” By the time Milligan touched down, the landings of fellow invaders Neil Gaiman, Grant Morrison, Dave McKean and Jamie Delano had already kicked up a significant amount of dust.  His ground-breaking work to revive Steve Ditko’s Shade the Changing Man

won him critical acclaim and helped launch DC’s Vertigo imprint, but never garnered as much media attention as series like Gaiman’s Sandman

.
But Milligan had shown he had staying power, and he continued to force the American super-hero to grow up over the course of his career.  Similar to Close in her portrayals of characters like the Marquise Isabelle de Merteuil in Dangerous Liaisons, Gertrude in Mel Gibson’s Hamlet and Alex Forrest in Fatal Attraction, Milligan has never been afraid to tackle sexual taboos in his work.  To my knowledge he never boiled Karen Berger’s pet rabbit in stock pot, but his Vertigo miniseries Enigma

did deal with homosexuality and sexual fetishism respectively, subject matter that many mainstream publishers had deemed too mature and explicit for their audiences up until then.
Milligan and Close have both also shown a healthy interest in and a talent for satire and parody.  Close’s successful turns in send-ups like Mars Attacks! and Hoodwinked showed that she could handle comedic roles just as competently as she had dramatic ones.  Similarly, in 2002 Milligan began a 39-issue run on X-Force/X-Statix

that was a more cynical take on the super-hero, envisioning the team as something more akin to the cast of a reality TV show than a group of costumed crime fighters.  Not all Marvel’s true believers were thrilled with the changes, but that wasn’t about to stop Milligan from shaking things up –in fact, he had planned to resurrect Princess Diana in the pages of X-Statix as a super-powered team member until public outcry in the UK compelled Joe Quesada to put the kibosh on the idea.
Still, you have to respect a man with stones big enough to even try a stunt like that, and while working for Marvel, no less.  So when the folks at Vertigo tapped Milligan to pen one of the first installments of their new Vertigo Crime line of graphic novels, they knew exactly what they would be getting – a writer who would challenge his readers to go places they might feel comfortable going.  After reading The Bronx Kill

, I can only imagine they were extremely satisfied with that decision. 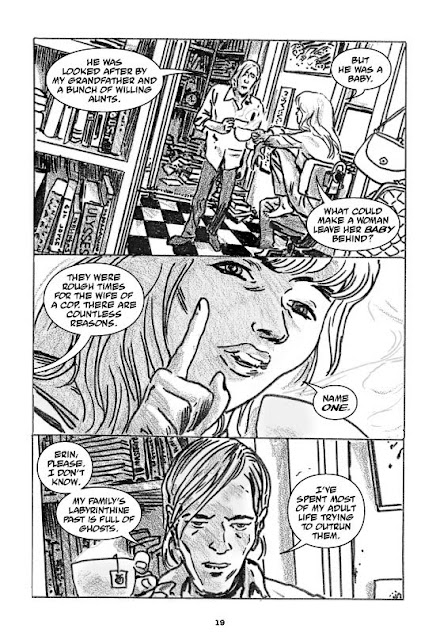 The Bronx Kill is the story of Martin Keane, a man who has spent his whole life trying to escape his family’s dark past.  When he was just a boy his father took him to the Bronx Kill, a lonely stretch of coastline on the Bronx side of the Harlem River,  so he could see the place where, generations before, Martin’s great-grandfather (also named Martin) was murdered under mysterious circumstances.  This elder Martin was an NYPD officer, as were his son and his grandson who had every expectation that Martin the younger would follow them into the force as well.  But on that day at the Bronx Kill young Martin chose a completely different path – to his father’s chagrin he eschewed the family business to become a fiction writer.  After the commercial success of his first novel, Martin’s second book flounders, leaving his career at a crossroads.  Martin eventually decides to travel to the Keane family’s ancestral home of Ireland to research his next book, though it means leaving his young wife Erin behind in New York for four months.  Shortly after he returns from his trip, Erin goes missing, and Martin is sent into a tailspin as he tries to find some explanation for her disappearance.  As his life unravels, Martin is forced to delve deeper and deeper into the Keane family history, until he learns the shocking truth about his wife and family, and how it all leads back to the Bronx Kill.
In this fourth Vertigo Crime novel, Milligan has crafted a complex thriller chock full of dark secrets and hidden motivations.  Complemented beautifully by the gritty, subtly emotive artwork of James Romberger (Six Miles a Second), the dialogue evokes a tension between characters that is palpable in every panel – as I read, I could feel there was always something else going on beneath the surface that wasn’t being said, but still couldn’t see the whole picture until the climactic reveal, when it hit me like a revolver butt across the bridge of the nose.  This is an utterly twisted tale of despicable acts perpetuated across generations, and one that will leave crime and noir fans thoroughly satiated. 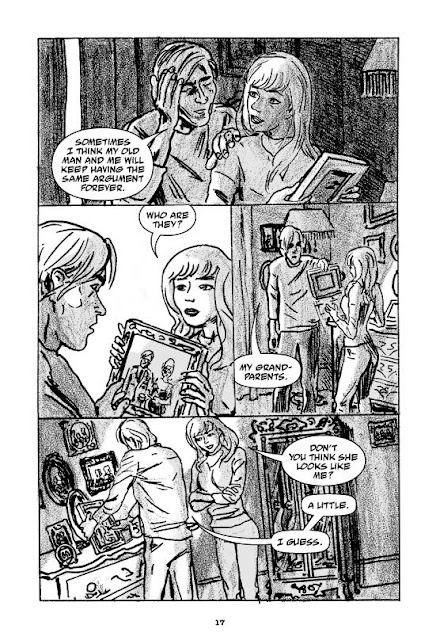 Milligan also made some authorial choices that lent this particular story a much more personal feel than his previous work.  The story is about family and murder and betrayal, but it’s also about writing, and how the best artists use the adversity they face in their daily lives as source material for their creations.  While I’m not privy to any details of Milligan’s personal life, the way Martin Keane adapts the traumatic events he faces in The Bronx Kill into his novel -within-the-novel suggests that at least the emotional content of this story comes from Milligan’s own life experience as well.   As a known proponent of the Method Acting technique, by which an actor taps into her own emotional memory of life experiences to create the character depth needed to play a role, Glenn Close would certainly find resonance in this story with her own work.
For Milligan’s sake, I hope that the actual events depicted in the Bronx Kill do not remotely resemble anything that has ever befallen him or his family.  Still, I’m extremely grateful for the mind that was twisted enough to dream it all up.  Consider this one of what I hope will be many pats on the back to come for Peter Milligan for The Bronx Kill.
Now, if we can only find a way to get Glenn that damn Oscar…
Miles Archer loves crime comics, old school hip-hop and The Super-Friends. He has profiled some very interesting artists in film, music, fashion and comics for publications such as Mixer, Mass Appeal, YRB and Big Shot. He doesn’t have his own website yet, but hopes you won’t think any less of him as a person because of it. He lives in Harlem with his wife and what must be the last standard-definition television on the eastern seaboard.
Posted by Christopher Irving at 11:17 PM