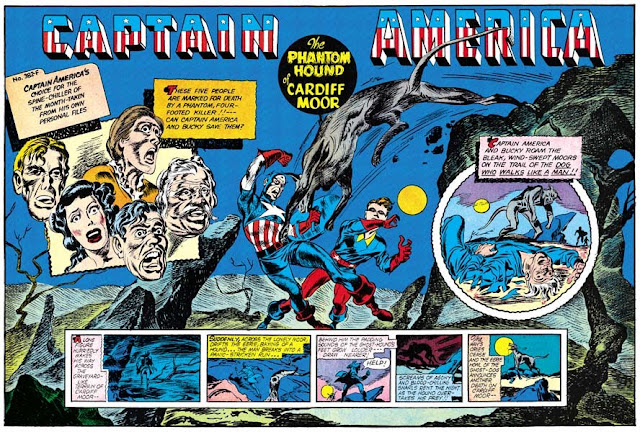 Words: Christopher Irving
This interview was conducted in 2001, when Joe Simon was suing Marvel Comics for the copyright on Captain America.

CHRIS IRVING: What can you tell me about the creation of Captain America, in your own words?

JOE SIMON: When I was at Fox Comics, I was editor there, and I was still doing other features, like Blue Bolt. I had a little office on West 45th Street, and I was doing Blue Bolt, and Silver Streak, covers, and freelance work after hours. I’d just walk from Fox to my little office and do all this work. That included work for Funnies, Incorporated with Lloyd Jacquet. Lloyd Jacquet was selling stuff to Martin Goodman, also. You know about Jacquet?

JS: Mickey was working there.

CI: Did he ever do any Captain America work for you guys?

JS: No, he was doing mostly text work there. I think he’s younger than I am, and mostly what I know about him is what I read when I read an interview with Bill Everett.

I was doing this stuff from my office, and Jack Kirby was working at the bullpen at Fox, along with Chuck Cuidera, Charles Nicholas. Did you know him?

CI: I’ve interviewed Chuck before, over the phone. Charles Nicholas, I did a little research on, since he may have created Blue Beetle, but he passed away a few years ago.

JS: Wait a minute, who’s Chuck Cuidera? He was Charles Nicholas. I heard that there were two of them.

CI: The Charles Nicholas I’m talking about, his real name was Wojtkowski, and I believe he was Polish.

JS: Right, and he worked with me for a long time, one of them did. I thought it was Charles Cuidera.

CI: It would have been Wojtkowski. Cuidera worked for Will Eisner for a little while.

JS: He’s Charles Nicholas Cuidera, and the other guy passed away?

CI: I want to say between the mid-80’s, and the past few years. The big controversy was over which Charles Nicholas created Blue Beetle. Chuck Cuidera claims to have worked on one, but although he worked for Fox, Blue Beetle was created out of the Eisner/ Iger shop, which would have been separate and before they had a bullpen at Fox.

JS: I never knew that. Chuck Cuidera said that he worked with me. I know that Blue Beetle was already created before I came to Fox. I had nothing to do with that, except that I did some covers. 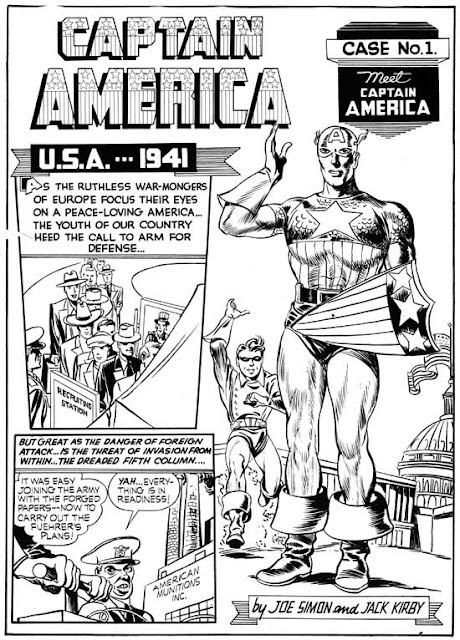 Anyway, here I was doing this freelance work after hours. I was very young, 24, I think. Kirby was even younger, and was working at the bullpen at Fox. He found out that I was doing this extra work, and asked if he could come over and work with me. I said ‘Sure,’ since I had more than I could handle. I had to get letterers and inkers to help me meet my schedule. When Kirby came in, I’d already done the work for Captain America #1, all the roughs and story outlines, and even the covers on the first page were laid out and lettered.

CI: You’d set up Captain America #1 and done the layouts?

JS: I’d done the story right on the boards, the roughs, and the presentations and everything else. I brought Kirby in, and he did his own wonderful work on it. He tightened up the pencils and did his own pencilling. We worked very closely together on it. He worked on Blue Bolt (I had already done the first issue), and he had worked on the second issue, and there were ten issues we had done there. Also, when there was no work and we were through with the chores, we worked up other features and kept them around. I was single and had more money then, and I’d pay off all these guys, and try to sell whatever we had done. Everything went, we were never stuck with a page of artwork. It was quite a successful little studio. That’s how the first issue of Captain America was done; from my little office on West 45th Street, after hours from Fox Comics.

Blue Bolt continued well into Captain America’s creation, as well as Silver Streak and Solar Patrol, and other stuff I did after hours with Jack. He came after the Captain America origin story. He brought everything to life, and I thought he was fantastic.

JS: The flag was it, and the shield. His girlfriend Betty Ross designed the costume, I had nothing to do with it. (Laughter)

The Captain America costume changed after the first issue, where the skin of his neck showed in the first issue and wasn’t covered by his mask. Of course, he had the vertical shield, which we had to change because of litigation from John Goldwater, concerning his character The Shield. I went from the vertical shield to the round shield, because of that. Kirby never got the story straight, in all his interviews.

Kirby never got it right, and he was quoted and requoted. John Goldwater was the publisher of Archie, and had this character called The Shield, who had a shield on the front of his costume, just painted on, and not a three-dimensional shield. He scared us, and we decided to change it to a round shield, no problem.

CI: It’s turned into a tradmark.

JS: It’s worked to our advantage. They’ve been using both shields, recently. I have the copyright on The Shield. (Laughter) What goes around comes around, right?

CI: How would you describe Martin Goodman?

JS: Martin was a nice little guy, not a very educated person. I’d say he was a loner, but he had all his brothers and family working there. He was okay, but there were things I consider outrageously nasty to the creative people, and harmful. When he reprinted Captain America in the 1960’s, he took may name off and put Stan Lee’s name on it. That’s something you just don’t do, and that’s cheap, shoddy and shameful.

CI: Stan’s first piece was in Captain America, wasn’t it?

JS: Not when I was there. He did two pages of text, which nobody read, that was the requirement of the Post Office for second-class mailing. My cat could write that. 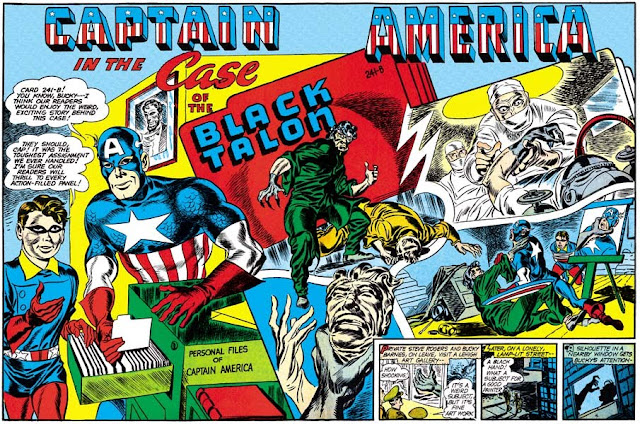 CI: What made you and Jack leave Captain America after ten issues?

JS: I was getting a royalty from Captain America, and it turns out that I was being lied to again, and cheated, and I resented it. Everybody wanted us in the business, so I made a deal with Jack Liebowitz at DC Comics. We had a contract with them, while we were working on issue #10. We decided to stay and finish that issue. They found out about the new deal, and the brothers surrounded us while we were working on Captain #10, and they fired us. They said ‘You better finish this issue!’ (Laughter)

It was stupid, just stupid. I don’t know how much the whole comic book industry has changed, but at that time, they were run by a bunch of unprincipled people, in my opinion. There were exceptions, of course. I think DC was much more principled. They treated us right, Jack Liebowitz was always good to me. Martin Goodman came from a circulation background, along with Goldwater and some of those smaller publishers. They dealt with the business like, in my opinion, the creative people would definitely not turn out any profit. It turned out that they even took the credit away from us.

CI: Who did you have working on Captain America with you in your studio?

JS: I had Jack working in there, and Al Liederson, who had worked with me in Syracuse and Rochester, he did the inking. I think it was Howard Ferguson doing the lettering. Charles Nicholas was working on it, but I think I have the wrong Charles Nicholas. Now that I think that was where they were.

CI: Did he have a Polish accent?

JS: Oh, yes, a Polish accent. A tall guy, he was with us for years. Howard Ferguson was drinking coffee and smoking all day, he’d mess up all the pages with the coffee and cigarette burns. He was the best letterer ever in the business, I think.

CI: Was Syd Shores working with you guys?

JS: No, Syd came later, with Timely, around the third issue, I think. 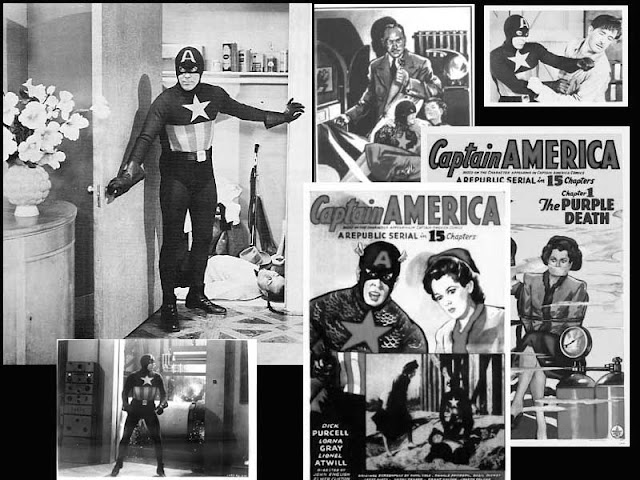 CI: What can you tell me about the Captain America movie serial from 1944?

JS: I was in the service, and Jack was in the service at the time it came out. We didn’t even get credit on it. The first I heard about it was when I was in Bolivar, and I saw it in a local theater. I didn’t go in to see it, but I saw a marquee that read ‘Captain America.’ It’s a bitter feeling to see your character in the movie when your name isn’t on it. Did I go through the royalty story with you?

Their accountant’s name was Morris Coyne.

CI: What a name, Coyne for an accountant.

JS: Oh, yeah! That’s funny. When I told Martin I wanted a royalty, that was more or less his idea. Later, Morris told me that I was really getting the royal treatment on the royalties, and that he was putting the expenses of the whole office on Captain America. It really burned me up.

JS: I saw them on TV, and I never got any tapes out of it. I don’t think they had the creators’ names on it. They did that until the fans started challenging them. They were giving credit for Stan Lee, and when the people got wise to them, they realized and changed the credit. Some of the people who worked at Marvel for a while were as fair as they could be. Kirby didn’t get along with them [all], but I think they were good guys.

CI: How do you feel they’re doing with Captain America now?

JS: They stopped sending me books a long time ago. I don’t see it, and I don’t know what they’re doing.

CI: What would you do with it if you had it?

JS: I have some very good ideas of what I’d do with Captain America. I don’t think I should tell them. I definitely have ideas on how to bring him to life.

CI: If this lawsuit does work out, you’re hoping to have some type of editorial direction with Captain America?

JS: Let the lawyers handle that and negotiate. I’m getting kind of old for this, and it will take another year and a half, from what I understand.

CI: Finally, did you ever see the movie that was done and released to video in the early ‘90’s?

JS: They did put our names on it, but they didn’t send me a tape. (Laughter)

CI: That’s kind of an oxymoron: they give you credit, but they don’t send you a copy.

JS: They don’t send me money, either. I didn’t get a copy of that.

CI: You haven’t missed too much. They made The Red Skull Italian.

CI: My problem is that these characters are not that complicated.

JS: Why did they make him Italian? I think they were playing with our heads in those things. The woman that ran the shop that was the front for the laboratory, her name was Roz, like Roz Kirby. In one of the made-for-TV movies, the scientist was named Simon.
Posted by Christopher Irving at 9:58 PM