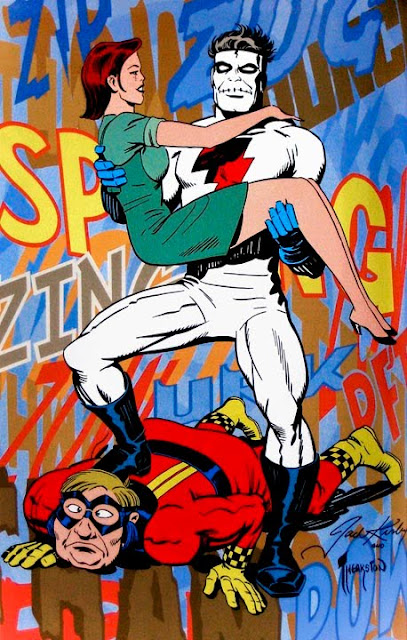 When it comes to my favorite work by Jack, it would be the Fantastic Four

hands down.  The family dynamic, the sheer original inventiveness of the science, machinery, and rich array of characters:  Doctor Doom, The Inhumans, The Silver Surfer, Galactus, The Watcher, etc.  In my opinion, it’s the best continuous 100 issues by anyone on anything ever!  Following the FF would be his unbelievably creative Fourth World Opus, particularly the New Gods

.  Yee-OW!  It virtually ended up re-inventing the DC Universe as we know it today.


Jack Kirby IS comics.
And to get a Kirby version of my Frank "Madman" Einstein character?  Sheer bliss!
I remember when Jack Kirby died.  We were at a convention in Boston.  And it's always best to be able to discuss loss, so being among so many who loved and appreciated Jack was quite comforting.
Love is not an inappropriately strong word either.   I, for one, am sure the building blocks my career stands on would not exist without
the influential and inspiring power of Jack Kirby.  I also like to point out whenever possible that beyond the work, Jack Kirby THE MAN, is something to aspire to.  I was lucky enough to meet him a couple times and I'll never forget his presence of kindness and dignity.  I've yet to hear anyone say a single bad thing about him.  A great, great man on every level.
Love.

series, which is currently being developed for a live action film with filmmaker Robert Rodriguez. His earlier work from GRAFIK MUZIK

was turned into the cult hit movie G-Men from Hell directed by Christopher Coppola (featuring Robert Goulet as the Devil). Other work includes Red Rocket 7

, his history of Rock and Roll told in the context of a sci-fi adventure storyl the Madman spin-off THE ATOMICS

and his magnum opus, THE GOLDEN PLATES

, where he's illustrating the entire Book of Mormon.
Mike counts the secret to his success to be his wife, and creative partner , Laura Allred, who is is considered to be one of the best colorists in the business.
Posted by Christopher Irving at 10:29 PM