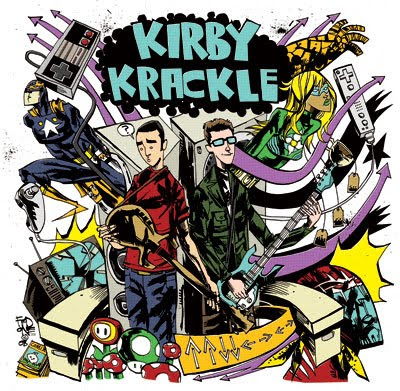 Words: Christopher Irving
I'm not a fan of the concept of a "nerd culture". I always felt that coolness lacked the self-deprecation that came with such a title. Kirby Krackle, a novelty rock band named after the outer space matter and energy "dots" devised by Jack Kirby, consider themselves "nerd rock".

They just sound like a fun pop culture oriented band to me.

Kirby Krackle are Jim Demonakos and Kyle Stevens, two Seattle residents who combine their fan-addled brains into creating a sound that merges They Might Be Giants with comic book and video game references.

The catchier tunes are the straight-up pop/rock songs, such as One of the Guys (about Ben Grimm), Ring Capacity (Green Lantern), or even Villain Song (about the codependent hero/villain dynamic), while the wittier are the ones that seem to focus more on the lyrics and gags, such as Marvellous Girls and Zombie Apocalypse.

With their new album debuting soon, you can stream their first album from their website, the first track of which is in the handy-dandy player below.

Posted by Christopher Irving at 9:57 PM