Graphically Speaking: On Our Hero by Tom De Haven 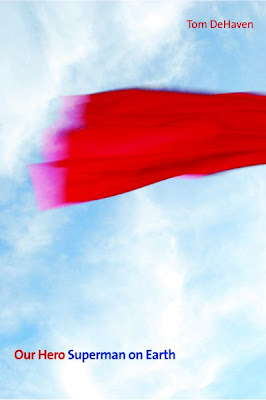 Words: Christopher Irving
When Tom De Haven gave me an advance copy of Our Hero: Superman on Earth,

I wasn’t sure what to expect from what he’d referred to as “the Siegel and Shuster Superman book” for a few years prior.
That term was partially to differentiate Our Hero from Tom’s 2005 Superman novel, the revisionist It’s Superman!, which planted Clark Kent right back where he really started, in Depression-era Kansas.

An expert on Depression-era America, De Haven flexed his historical and sociological muscles to present Clark Kent not only figuring out his powers, but also determining their purpose in the declining morale of the country. It’s Superman! was a fresh look at the classic version of the character, and a believable (but not over-explained) take on Superman’s cultural origins.

Our Hero is De Haven’s essay collection on the influence of the Man of Steel since his inception in 1938’s Action Comics #1, all the way to his current relevance. Early on in the book, De Haven asks if Superman really matters in today’s society, using the insane amount of times he was interviewed during the 2006 release of the disappointing Superman Returns, as well as a review of the Death of Superman comic book as points of departure. From there, De Haven launches into the history of Superman’s creation by Jerry Siegel and Joe Shuster, and traces the evolution of the prototypical superhero.

He doesn’t just trace Superman historically, but sociologically and characteristically, as well, noting the Man of Steel’s evolution from fiery activist of the Great Depression to the stodgy father figure of the ‘50s, and even through his short-lived revamping in the 1970s. Also well touched upon is Superman’s effect and popularity in the media, including De Haven’s candid but affectionate review of the Superman movie of the late ‘70s.

De Haven’s strength, and where Our Hero becomes more than just another history of Superman book (or the aforementioned “Siegel and Shuster book”), lie in his distinct writing voice, punctuated (pardon the pun) through his use of short and choppy sentences for effect. Our Hero is written with a conversational tone that never becomes stuffy or condescending.

One of my greatest criticisms of most comic book history and journalism tomes is that many of the writers are fans first, and writers second (GNYC is, in many ways, a reaction to that “clubhouse” mentality), and Our Hero is an exception to that. De Haven has balanced his love and personal connections to Superman with the honesty of a critic. Because he openly loves the classic and iconic Superman, he isn’t scared to call out the shortcomings of some later reiterations, or the impotence of Superman existing alongside countless other supermen in today’s comics.
Posted by Christopher Irving at 3:17 PM