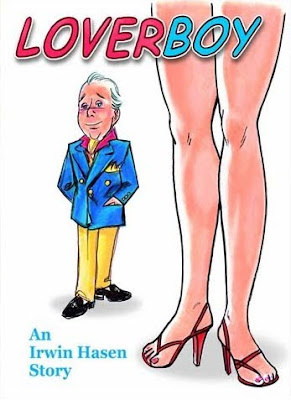 Full disclosure: I love Irwin Hasen. As a cartoonist, he’s still a master craftsman; as a person, he’s a peach of a guy with a wiseguy attitude. When you meet Irwin at shows, he’s always wearing an ever-present ascot, a short guy with bright blue eyes and a huge smile.

The girls love him. He’s sweet. He’s cute. He’s funny. Even my girlfriend has been charmed by Irwin on more than one occasion.

There’s another way Irwin’s still got it: His gutsy autobio graphic novel, Loverboy

, reveals how Irwin’s always had a way with the ladies, and delves into the reasons why Irwin Hasen has always been attracted to women much taller than his short frame.

A ladies’ man, Irwin is faced with the loneliness of a bachelor’s life every time the objects of his nightly trysts take leave of him after nights of fun and passion. Irwin was envious of men who lived the family lifestyle with wife and kids, knowing full well that married fathers would kill to have Irwin’s swingin’ lifestyle.

Loverboy opens with Irwin making the decision to visit a shrink to get to the bottom of his fascination with taller women: is it a need to prove himself through larger women? Are his obsessions with buxom breasts a way to compensate for the lack of a mother’s love?

From there, Irwin falls madly in love with a single mother with a daughter and lots of non-committal baggage. As Irwin ends every date with “Love me?”, it’s not so much his expression of his love to her, as his need for her to love him. While their dysfunctional relationship is the crux of the book, it does not end with a final conclusion, so much as a punchline that teases just how in over his head Irwin has become.

At 92, Irwin cements his mastery of the cartooning form, drawing sexy and buxom women with a minimum of linework, his brush line still steady and fluid. He draws himself at an exaggerated diminutive size for effect, and even nails his own puppy dog eyes without the benefit of the vibrant blue they are in real life. While eschewing panels for a looser Eisner-esque approach, Irwin’s storytelling in Loverboy moves at a fast clip, leaving me as a reader with a desire to know more about his background, as well as what happens next.

At the tail of Loverboy is close to thirty pages of memoirs, or Irwin’s own recollections of his life. He provides an amazing collection of personal details about his childhood and career as a performer, with even more on his family life.

Where Loverboy lacks, however, is in conveying to the reader why his relationship with Eevie is head and shoulders above any prior ones; did Irwin never allow himself that level of commitment? Why was he always so aloof; had he been hurt before? There are other editorial hang-ups that I wish had been conveyed earlier, such as Eevie’s name, which we don’t find out until the fifty-fifth page.

Loverboy is published by Vanguard Publishing, a small publisher of art books on cartoonists, particularly a recent reprint of Joe Simon’s biographical The Comic Book Makers

(which comes highly recommended by this reviewer). I find it very odd that Vanguard publisher and Loverboy editor J. David Spurlock felt the need to include himself as a promotional quote on the back cover: rather a conflict of interest, isn't it? And aren't comics masters like Kubert and Adams enough?

As a historian’s aside, I’m most curious about is a playwright, radio and television writer named Winifred Wolfe, who Irwin had briefly dated. Irwin first mentioned her with fondness when I called him about a radio show I stumbled across – one that outlined comic book artist Irwin Hasen’s one-man battle against Nazis – an episode of 1950’s Cloak and Dagger. Wolfe wrote Irwin in as a favor, and I think it’s yet another testament to Irwin Hasen’s charms.

In the end, Loverboy is a poignant graphic novel that shows that even old masters like Hasen can successfully venture into unfamiliar territory. It’s funny, sexy, witty, risqué, ballsy, sensitive, and a must read.
Posted by Christopher Irving at 11:01 AM