Graphically Speaking: The Life and Times of Savior 28 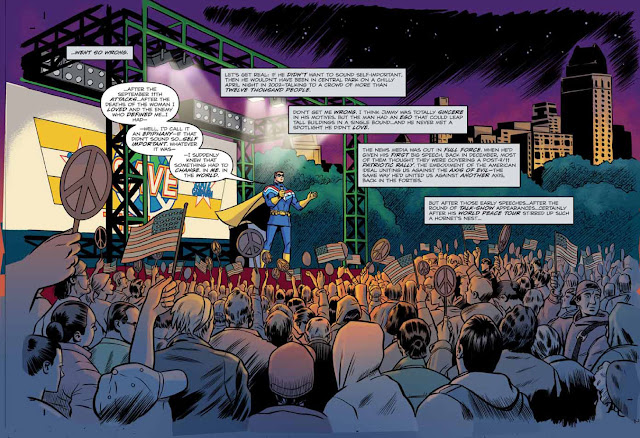 Words: Jared Gniewek
I've been on a rant the last few years about violence in super hero books. Not that I mind it. It is, after all, entertaining and visceral. But, to be aware that it is a fantasy of violence. A fantasy that doesn't translate effectively into our own world. I know that this sounds rather simplistic but I've been troubled by the militarism in comics and, as we do live during wartime, it's been important for me to keep the simple morality of comics simple... as ridiculous as it is. That enough situations merit fisticuffs in the lives of these costumed adventurers is preposterous.

Comic book violence tends to be infantile problem solving through tantrums of spastic aggression. We as readers enjoy it specifically because our lives almost never require punching, kicking, yelling, or crapping laser beams at a foe. It provides easy answers for problems far outside our abilities to solve. We, for the most part, are safe, secure, and polite adults. Violence never solves anything in our world. It sets us back as a species with each missile, bullet, and punch. It lowers us. Somehow, though, super heroes elevate us. It is a brutal and strange dynamic which keeps me enthralled.

addresses this dynamic through attacking the ridiculous concept of sustained and cyclical super hero violence  in a persistent world head on. It was the right book for me at the right time. It reminded me that super hero comics don't need simplistic morality to work. That these characters can have evolved and idealistic world views and still be entertaining characters in a four color world. It's been awhile since a book got me by the throat like this. 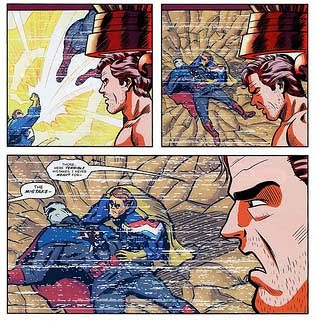 It was a stroke of genius (or just great storytelling) to use the ex-sidekick as the narrative voice. As human as Savior 28 was in his naivete and frailty, it still helped to frame him with someone who lacked his God-like abilities. It also helped to distance ourselves from him through a chronicler. It's hard to imagine what truly goes through a human being when they have an epiphany, but we've all seen the results of rapid changes in priorities and mood of loved ones and friends. When an alcoholic gives up the drink, we can never truly know what synapse of events and information is the impetus. They can try to tell us but we can never know. The same with Savior 28's embracing of peace after a lifetime (several, really) of repetitious fights with super foes. Better, to  concentrate on the whats and make educated conjecture of the why. 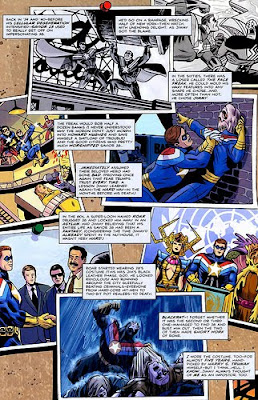 DeMatties's dialogue and pacing have never been better. His background in music, as always, is evident, in the rythmic cadences of narration and speech. It flows like water, boys and girls. It trickles, it roars, it floods, it abates. This has always been his strong point. His tone and voice. His thematic uses of refrains (and even choruses) make each page come alive with elements of song.

Interestingly enough, Mike Cavallaro comes from a musical  background as well. And, while it would be hard to say on this piece, I imagine it influences his sense of pacing on his own work. This was a full process script so the beats were all in place. His strength is in an uncanny grasp of line. Where to make it heavy, light, wispy, strong. Mike Cavallaro has a tool for every job and a solid confidence in how to lay it down. It is a great complement to a great script. 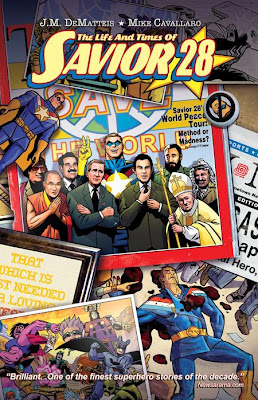 Frankly, this book couldn't have been much better. It has a message as big as life but never comes on heavy handed or preachy. It helped that they made damn sure that Savior 28 was a living breathing character first and foremost. It makes his choices work. He always behaves true to himself and if you believe (as I do) that writing is channeling... well let's just say that Mr. DeMatties could give the creepy little lady from Poltergeist a run for her money. Savior 28's response to his inability to stop 9/11 (really the dramatic crux of the book) left me wondering why Marvel and DC didn't have the balls to show characters really losing it. Crying over flags and posing for Military ads is well and good but how could The Hulk or any of these guys even get out of bed?  I'd have loved to have seen reflections of the real world effects run deeper in the mainstream of superhero comics. Savior 28 gets this right time and time again as our protagonist is faced with some of the worst inhumanities that the Twentieth and early Twenty-first century have to offer.

In its own way, this book made me a better person. I hope it has the same effect on all who read it. I honestly believe it will make the world a better place. If each reader of this book pauses for just a minute of inner peace...well, it's not much in the greater scheme but it is something wonderful and precious. 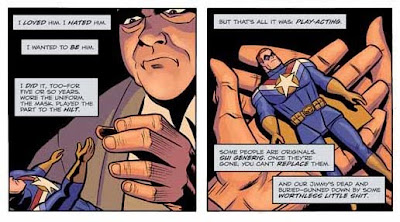 Reviewer Jared Gniewek joined Graphic NYC with the site's relaunch in September, 2009. Jared has worked in the music industry as a back line technician, performer, and promoter. He has also been a freelance writer whose work can be seen in the recent re-launch of Tales from the Crypt and heard on The Dark Sense, an audio anthology of the macabre for which he is also the story editor. Jared’s blog, Die By The Pen, outlines his philosophies and personal quest as a writer. His cartooning can be found on his blog Scary-Oke, a monster indy cartoon karaoke game stemming from his own twisted mind.

Posted by Christopher Irving at 10:09 PM