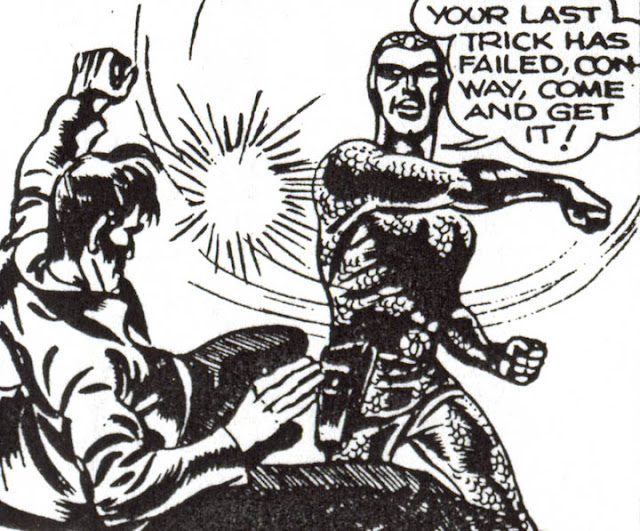 Words: Christopher Irving
Jack Kirby's first superhero work was on a third-rate character for an even lower-rated comic book publisher, Fox Comics. Not long out of his tenure with Will Eisner at Universal Phoenix, Kirby became a staffer on publisher Victor Fox's bullpen, cranking out the Blue Beetle daily strip, a failed shot at making a small character a success of Superman proportions.

The story went that publisher Fox was once an accountant at DC Comics, who started his own company to cash in on the new comic book craze. In an instance of both prescience and fraud, Fox commissioned Will Eisner and Jerry Iger's comic book production shop, Universal Phoenix, to create a blatant Superman knock-off named Wonder Man. After Fox lost a lawsuit with Superman's publishers, one that Eisner testified against the crooked publisher at, Fox decided to open his own bullpen of artists to jump start his comic book empire.

With Wonder Man cease-and-desisted into comic book limbo, Fox was scrambling to find another "star" for his line. Now that Universal Phoenix was no longer creating the content for his line, Fox grabbed a Green Hornet knock-off named Blue Beetle from the back pages of his comic Mystery Men Comics, and cast him as his new leading man. Aside from his own comic book, and a failed Sunday strip (which reprinted half a comic book page each installment), The Blue Beetle had a short-lived radio show, and an original daily strip, all in a bid for superhero stardom.

Perhaps timed to coincide with the release of The Blue Beetle #1, The Blue Beetle daily comic was literally a one-time victory over National‘s Superman—only one newspaper has yet been known to have ever carried the strip.

At the height of the Superman strip's popularity, it was read by 25,000,000 readers in 285 papers. Could The Blue Beetle compete? The Boston Evening Transcript thought so on January 8, 1940, the first day of the strip's run:

The Transcript presents today to its comics strip devotees ‘The Blue Beetle.’ It appears for the first time in the place of honor at our right.

“The Blue Beetle,” let it be known, accords with the latest trend in comic strips in presenting the incredible adventures of an individual of extraordinary powers. But it works, we believe, a definite artistic advance in his category of strips in that it makes these superhuman feats more nearly within the realm of common laws of physics, anatomy, etc. In other words, it makes incredibility more credible, with the ingenuity of a Jules Verne, an H. G. Wells or a Johnathan Swift.

With introducing “The Blue Beetle” with our right hand, we wave a measuredly regretful farewell to “Superman” with our left. The escapades of Superman during the months of his incumbency here have often strained our sense of logic, and many of our readers have indicated a similar feeling that the cards were too definitely stacked in favor of Superman.

"Listen, Eli," hotshot York City Sun reporter Charley Storm reasons with his editor. "You know I'd be the first to laugh this thing off but I can't because I've a burning hunch it's true!"

Storm turns to face a darkened window, looking out at the York City night.

"I tell you, Eli, that somewhere in York City tonight there is an incredible personality who is waging a private war against crime. Who he is and what his motives are, I don't know.

"Despite your skepticism," Storm says as he turns from the window. "I know he exists and I'll find him. There's a story somewhere when killers like 'Croaker' Conway and crime czars like Dude Riley become irritated when I inquire about underworld rumors concerning this man the mobsters call 'The Blue Beetle'!"

"Look, Charley," Crane puts his hands on the spunky reporter's shoulders. "I'm editing the 'York City Sun' not 'Grimm's Fairy Tales.' Now fix that hangover with a bicarbonate of soda. It'll chase away all those 'Blue Beetles' you've been seeing."

A silhouetted figure swings by the Sun's window as Storm makes a vow to his editor.

"Okay, I'll go quietly, Eli," Storm pronounces. "But I'll find the 'Blue Beetle' and when I do, I'll bring back an exclusive that'll blow all your page one stories into the recipe column."

With a powerful left arm, the Blue Beetle pulls himself onto the ledge of a building, pondering. 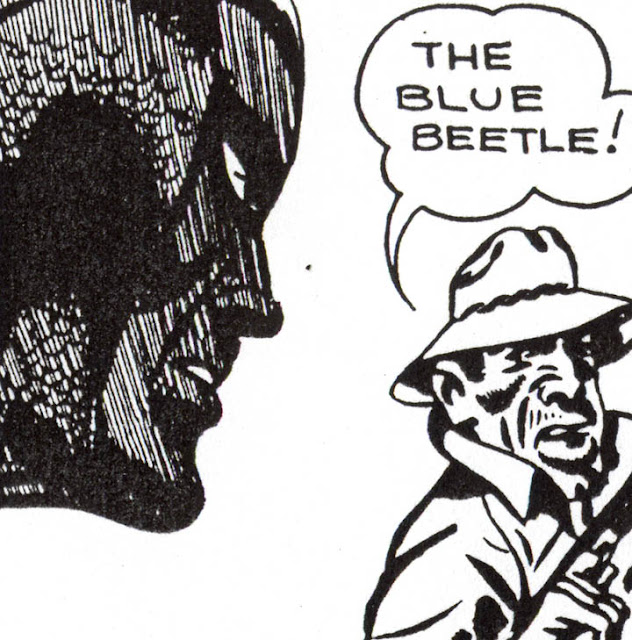 So started the first two days of the The Blue Beetle daily strip, drawn by a young Jack Kirby, before he partnered up with Joe Simon on Blue Bolt. Dramatic Kirby eartags dominate The Blue Beetle, as characters stand with powerful muscular and elongated bodies, punches are thrown like piledrivers and shadows pour over characters like black syrup. It was Kirby's first superhero work and it smacked of Milton Caniff, using of blacks to establish a noir-ish atmosphere as The Blue Beetle himself creeps through the shadows of York City. The art is heavily rendered with the youthful enthusiasm of a young Kirby, everything from the chain mail of Blue Beetle's armor to the cross-hatching of a gangster's automatic. It's a great indication of his work, before future partner Joe Simon's influence. According to Simon in December, 2000 Kirby apparently wrote and inked The Blue Beetle strip as well, which also predates Space Rangers as Kirby’s first published comic strip.

The Blue Beetle follows rookie cop Dan Garrett as he witnesses the murder of the city’s D.A., and (as the Blue Beetle), tries to take down the crime boss responsible for the murder, Dude Riley. Along the way, the Blue Beetle saves murder witness Judy Grant from the D.A.'s murderer, Killer Conway, in a tussle that results in a forced confession and the Blue Beetle fleeing from a flock of policemen rushing to save Grant.

"They may be friends of mine but this get up may - er - confuse them," The Blue Beetle says as he rushes down the hall. As he reaches the roof, a new high-powered police rifle cracks out a shot, getting the mysteryman in the shoulder. Dragging himself along the rooftop, the Blue Beetle stops on a ledge as policemen surround him. The Blue Beetle drops off the roof, apparently suicidal, but dangling off a fire escape away from the eyes of the policemen. His magnetized "magneto" gloves give him a great grip...but not enough to support his weakened body as he finally drops with the "whirling vortex" of the streets rushing up towards him in a sequence similar to the montage in Raymond Chandler's 1944 movie Murder, My Sweet.

Awaking in the bedroom of Ruth Hale, a woman whose terrace the Blue Beetle's magnetized gloves conveniently cling to, Dan Garret is out of commission for the rest of Kirby's strip. The resulting story is a crime strip with a bed-ridden mysteryman, letting news reporter Charley Storm (who has become involved with Grant) and the D.A. become the protagonists for the remainder of Kirby's run.

The surprising thing about The Blue Beetle strip is that it differs so drastically from the comic book in a number of ways. Aside from the art in the comic strip being more fluid than that of the rather stiff comic book counterpart, the cast of supporting characters are radically different in the Jack Kirby strip.

Blue Beetle's token Irish cop, Mike Mannigan makes his first appearance in the February 29 installment, but rarely appears in Kirby's storyline; perhaps Kirby felt Mannigan would be too comical for his dark crime strip. Rather than the benevolent mad scientist Dr. Franz, The Blue Beetle’s partner in his war against crime is named Dr. Abe Krantz (this precursor to Franz appeared in the first Blue Beetle story in Mystery Men Comics #1). As opposed to the generic racketeers that are smattered throughout the comic book stories, the Blue Beetle’s opponent in the strip is the aforementioned Dude Riley, a sly gangster who always has his trademark pet by his side: an uninspired wolf named Wolf. Riley’s equally colorful henchmen include Lucifer Long, a wiry man whose angular features earn him his nickname, the slobbish Fats Ricardi, and the dashing “Ladies Man.” Kirby creations all, these slick gangsters offered a stimulating opposition to the Blue Beetle and Storm.

It seems obvious that Kirby did his damnedest to avoid drawing a superhero strip, as he put the main character out of commission early on enough, forcing it into a crime strip in the vein of Dick Tracy.

As Ladies' Man Lewis is captured on March 9, Jack Kirby is set free from The Blue Beetle. Chances are, it was right about the time he and new partner/Fox editor Joe Simon headed off to create Timely Comics' star hero, Captain America. The partnership that followed is the stuff of comics legend.

As for the Beetle himself? He lasted nine more surprising months in the newspapers; after Kirby left, Fox staple Louis Cazaneuve drew the stories, which were then reprinted in the comic books. Aside from a brief stint being published by Fox's old printer (who the publisher, unsurprisingly, owed money), Holyoke, The Blue Beetle lasted until the early '50s. Since then he's gone on as the "character actor" of comics, changing with every trend in superhero comics. His current DC Comics incarnation is radically different than the unassuming Green Hornet rip-off of the 1940s.

Posted by Christopher Irving at 10:30 PM