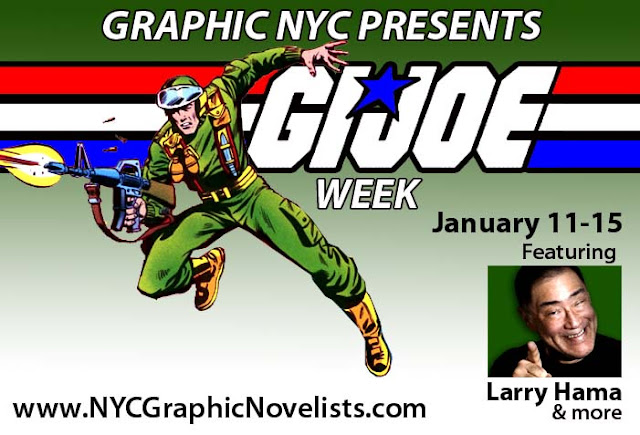 In 1982, there was a red, white, and blue revolution when G.I. Joe premiered in a line of action figures, cartoon series, and a comic book that ran for over a decade and introduced an entirely new generation of readers to comics.

Graphic NYC celebrates G.I. Joe: A Real American Hero with G.I. Joe week, starting January 18th.
“Like a lot of kids who grew up in the ‘80s, Joe was my gateway drug to the world of comics,” GNYC editor and writer Christopher Irving says. “When Larry Hama wrote a hundred plus issues over a decade, he did some pretty brilliant and ahead-of-their-time things, and I consider this week one huge homage to Hama and his work on this cult book.”
Seth Kushner adds, "I also started reading monthly comics because of G.I. Joe, and working on all of this week's great content, reminded me of why I loved Marvel's Joe book as a kid and has given me a new appreciation of it as an adult."
Monday kicks off with “The Swivel-Arm Battle Grip Revolution,” Irving’s essay on the history of the Joe comic and toy line, followed Tuesday with a GNYC profile on Hama himself, written by Irving and photographed as only Seth Kushner can. Wednesday sees a sneak preview of Zack Smith’s (of Newsarama fame) Getting Over the ‘80s, Zack’s witty and unique look at the world of ‘80s animated toy cartoons as it tackles the most terrifying episodes of G.I. Joe ever. Thursday sees Scary-oke’s and GNYC’s Jared Gniewek combines his trademark strip with the villains of COBRA, while Friday sees Seth’s For The Love of Comics on the G.I. Joe silent issue, and Miles Archer looks at IDW’s G.I. Joe: COBRA mini-series.

“And there’s one final surprise in store for that week,” Irving hints. “It comes from one of the current IDW Joe books’ best artists.”

Graphic NYC started in January, 2009 and delivers its trademark “New Comics Journalism” approach to profiling comics creators and their work.