Swivel-Arm's for Amateurs: Checking Out the New G.I. Joe 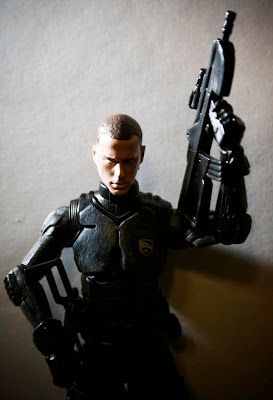 The first G.I. Joe figure I ever got was Destro, the man with the chrome head and pimpin’ black outfit. He had something new called ‘Swivel-Arm Battle Grip,’ a joint above the elbow that made it easier to hold a rifle. That was back in 1983, when Joe was only “A Real American Hero”, and it was cool to be patriotic and fighting terrorists wasn’t considered safe for a kids’ toy line. Things have changed because of last year’s G.I. Joe: The Rise of Cobra popcorn movie, where they’re now a U.N. peacekeeping force decked out in black body armor.

Getting a new box of Joe figures to review, and having not picked one up since I was twelve, makes me realize how much further the new ones come. Swivel-Arm whatsis? Nothing compared to figures with jointed wrists, ribcages, ankles, and knees. They’re leaner and meaner than the ‘80s generation, trading in a hard plastic for a softer plastic. The metal screws are gone now, too, traded in for more concealed ones. In short, the new figures are leaner and meaner, with everything from built in holsters to impossibly huge spring-loaded bazookas that are as big as the figures themselves.

The Joes and Cobras recruited for this are all from the G.I. Joe: The Rise of Cobra movie line: Duke, Scarlett, Ice Viper, Storm Shadow, and Sgt. Thunderblast and his Armored Panther tank. One of the first figures I ever picked up as a kid was Storm Shadow in 1984, at a crappy department store in my hometown that rarely ever moved stock. The “Paris Pursuit” Storm Shadow figure is the assassin sans mask (and with a dead-on facial sculpt of actor Byung Hun-Lee), loaded to the nines with bad-ass weaponry: a sword and katana, as well as two sais, all of which click into his backpack. A small pistol even fits snugly into a holster on his right leg, while a suction cup with two handles lets the figure hang around and look stealthy and ninja-like. The old Storm Shadow came with a clamshell backpack where you could store his two swords and bow and arrow, and this version’s backpack is a slight throwback to that. Unfortunately, the peg used for the new figure backpacks doesn’t hold the pack in, causing it to constantly fall off. 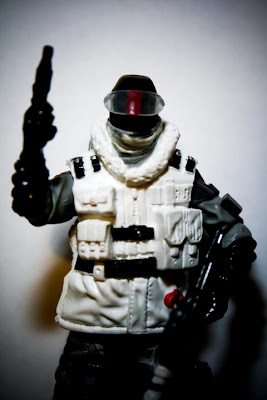 I’m not sure if I dig the Ice Viper, an original figure designed with the movie look in mind. Equipped with a thick winter coat (made out of flexible rubber that snaps on the sides), and baggy M.C. Hammer pants, he looks awesome. But when you get to playing around with him, the pants only bend at the knees and just seem cumbersome, especially when you consider how small his feet are by comparison. And in terms of being an arctic trooper, he’s pretty poorly outfitted. Where are his snowshoes or skis? His gray camo would do a poor job of blending in with the snow, so why isn’t it white or cream? Does he just tromp around the arctic base with his gun and automatic? He does have a spring-activated gun in the form of a weird sled, which you can kind of get him to kneel onto, but only if you’re lucky. Throwing pegs on it for the figure to stand from would work much better.

In all seriousness, he is a cool figure with a great design. The eight year old in me would be pretty nuts about him. 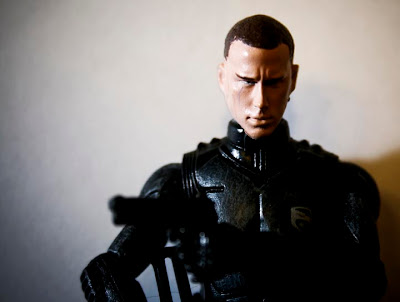 The Duke figure, based off of actor Channing Tatum, has an added feature – it perfectly imitates the charisma of Tatum’s onscreen performance. All that aside, it’s a swell figure, armed with a dagger and built-in boot scabbard, web belt, and two assault rifles. He does look a bit on the spindly side, though, and could probably use a Yo Joe protein shake and a burger. 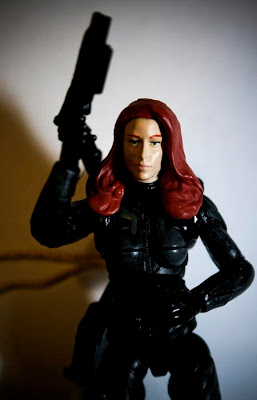 Let’s be honest: girl action figures always came across a bit mannish, like my female Phys. Ed teacher in elementary school. The new Scarlett figure, based off of actress Rachel Nichols, it has another eerily similar facial sculpt, and even looks feminine! Her accessories kind of leave me a bit befuddled, until I actually play around with them: her bazooka fires a large grappling hook, which (through the shoulder harness backpack that’s a bitch to first get on, but is held in place by her plastic hair after) loops through this weird repelling gear on her back, ending in a smaller hook. If you play it just right, firing the bazooka line feeds through and pulls the other grappling hook in to the end. There’s even a spot on the bazooka to clip the end of the small hook. Her distinctive crossbow comes in two parts that clip onto her belt holster, and she also has two holsterless automatics for double-fisted action.

I used to love getting the vehicles in the ‘80s: they required assembly and came with “blueprints” that outlined and detailed every cannon, switch, lever, and imaginable feature. Also, more often than not, the larger vehicles came with driver figures that you couldn’t get anywhere else. 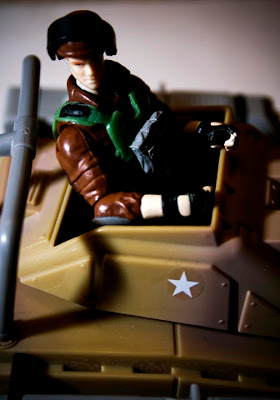 There was a one-man tank called the Armadillo in 1985, and a larger tank, The Slugger, which came with the driver Thunder, the year before. I always wanted the Thunder figure. He was cool, with his flak jacket, helmet with visor and twin antenna, and a monocular around his neck.

In repackaging the old stuff for this new line, Hasbro added twin spring-launching cannons to the sides of the Armadillo and rechristened it the Armored Panther. Even sweeter, they packaged it with a new Thunder figure, now called Sgt. Thunderblast (probably because of a loss of trademark).

I have to admit: I was stoked to have an old favorite and a new take on a much wanted figure, the Holy Grail of the Joe drivers. Too bad Thunderblast was a slight disappointment. Sure, he’s a fine figure, except for the ridiculously thin neck and small head. It looks like they gave him an original Joe figure helmet and visor, but the problem is his head is just a bit too small for it, and it wobbles around pathetically like a Joe bobblehead. The holster on his left leg even has a molded in gun that’s only for looks. With the exception of the pencil-neck and pinhead, he’s a pretty cool figure.
The one “upgrade” they made was with the twin spring-launching cannons on the Panther’s sides. The plastic missiles fired a good ten feet across my living room floor and terrorized my cats in the process. 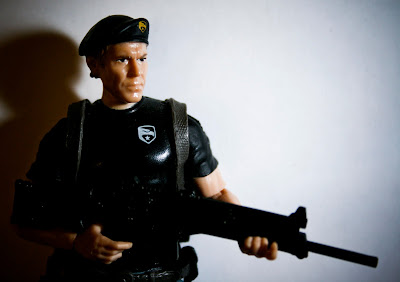 Lastly, a pal brought a Dennis Quaid General Hawk figure, and the party was complete! Maybe because I’m an old school Joe fogey, I love the design on Hawk: with a black t-shirt and gray camo pants and beret. He looks and feels like an original Joe figure. Hawk carries a sweet briefcase with warheads (the MacGuffins of the movie) and a winged jetpack.

And, even cooler, it looks exactly like Quaid, thanks to the wonders of facial scanning.

This old-school Joe fan has to admit, the new figures are better made. That doesn’t necessarily mean they’re better packaged, however. The old figures had detailed filecards that described the characters’ backgrounds and personalities, while the new ones only talk about the “cool action figure weapon and outfit”. Also, there’s no indication exactly how many there are to build an army with. The back exclaims “Collect other G.I. Joe action figures!” but only shows about six other random figure shots. The old card backs had small thumbnail images of all the figures, giving us kids an idea of how many more we had to be on the lookout for.

And it worked, much to the chagrin of my parents and my occasional sob story of “But I never find Snake-Eyes (or other figure of choice) anywhere!”

It’s kind of hard to tell just how many kids are digging these new figures as opposed to thirty-somethings like myself. After playing around with my new acquisitions this weekend, I find myself scouring the toy aisles and looking a bit more closely at the G.I. Joes.

Special thanks go to Danny Palestine with Hunter PR for his assistance in this review.
Posted by Christopher Irving at 7:35 AM