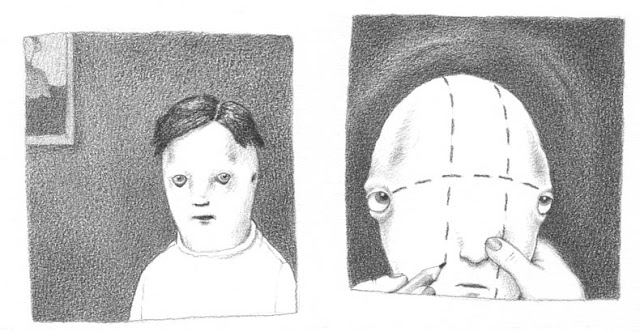 CHRIS IRVING: First off, tell me about Corny's Fetish.

RENEE FRENCH: The book is actually 60 pages long, and I just finished it. It's about a lonely [and] nerdy man whose obsessed with the little woman across the way. He's very quiet, and he has a little dog, and it's just about...being obsessed about someone you don't know.

RF: He's not dangerous, but his obsession does destroy him, it is self destructive. He does not hurt anybody else, except maybe the people who love him, they don't have him anymore. It's actually the sweetest thing I've ever done, most of my work is pretty disturbing. This is disturbing on it's own level, but the other stuff I've done has been shock-value stuff. This is not that, it's a quiet piece. Although it's got some pretty violent stuff in the beginning, there's a little bit of blood and a little bit of electrocution, it's kind of a quiet piece.

CI: Is it a silent comic?

RF: It is until something happens that gives it sound. Forty-five pages are silent, then the last fifteen pages or so have sound.

CI: So what led to your decision to make three quarters of the book silent?

RF: It's part of the story, it works into the story. Another thing is, as I've done comics, I've become fond of the panel that have[n't any] words in them, for a lot of reasons. For classic artistic reasons; compositionally I don't like words in the way, I like a nicely composed panel that I have control over. I don't like to stick a word balloon in the way that disturbs the feeling for me; there's that, and I've really started to enjoy sequential art and communicating with pictures. I love Chris Ware's work, and he does a lot of that. It's more fun for me to do that, and of course, it is part of the story.

CI: I've heard your book described as having a rather David Lynch-ian atmosphere. Would you describe him as one of your influences?

CI: You don't seem a typical comic book artist. Do you go into your comics with a film-maker's mentality?

RF: The only way I can answer that is to say I am not a big comic book fan, I am a huge film fan. I'm into fine art and film more than I am into comic books, so I think that's where my aesthetic is. I didn't know much about comics when I was a kid, or even a young adult, I just found it later. Then when I found it, I found the alternative stuff. I have no exposure to the mainstream comic books. My comic book dialogue is very different. I don't understand the language as well as most comic book artists. I don't understand the icons and the rules of comic book art. I stumbled into it from fine art, and tried to learn how to do it. I was learning how to communicate something through panels and words, rather than just one panel, it is a very different thing. [It is] like learning all over again. 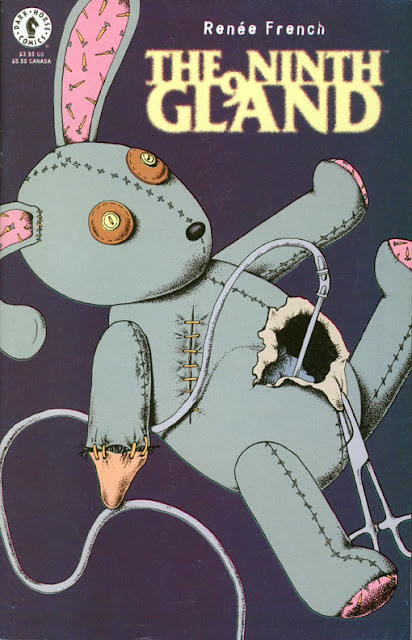 CI: The Ninth Gland seemed very unique, what kind of feedback did you get on that when it first premiered in Dark Horse Presents?

RF: Actually, I got a lot of mixed reviews. For some people, it was too strange for them, and it was too out of the comic book world. It didn't feel familiar to them, which is what they were saying. They didn't know how to hold onto it. I also got a lot of great response: "It gave me nightmares," these were positive responses! (laughter), "It was really disturbing," There was something about the children operating on the stuffed animals that was really registering with a lot of people. Also, some of my readers for when I did Grit Bath for Fantagraphics, were happy to see it, because I'd fallen off the face of the...comic book world for about a year. It's actually less creepy than some of the stuff I did back then, but I think some of the storytelling is better.

CI: I was going to ask about Grit Bath, Real Stuff, and The Big Book of Death. Which was your first work?

RF: The very first thing I did that was not self-published was an eleven page story with Dennis Aicorn in Real Stuff. It was about racial tension and bouncers in a dance. It was long and very tediously drawn, and then Gary Groth saw that and gave me a comic book; that's where Grit Bath came from.
CI: How long did that series run?

RF: Grit Bath was three issues and there should be another one. I may be...finishing off [one of the ongoing stories] and then putting it in a graphic novel, soon but I'm not sure when. That was three issues, [over] two and a half years.

CI: You did a short little something for The Big Book of Death in 1995?

CI: What do you feel is darker, the artwork, or the story content itself?

RF: That's an interesting question (pause). (laughter) That's a new one, no one's ever asked me that one!
The artwork is pretty creepy, but because it's cute, and then there's something on the outside of that. There's a cuteness to it, and then, I guess underneath, there is a creepiness. The story content maybe creepier because, I guess it depends on what the story is. There's a story that will be coming out in World Art magazine about my work. The author sent me an advance copy and I read it. There were little synopses of my stories. I read them and I couldn't believe it. "There [could be] no way I wrote this thing! That's sick! It's not possible." I thought about it and said "Yeah, that is what the story is about." I was shocked by the content of the stories I've done, and didn't realize what was going on.
I guess it could be both.

CI: What do you have planned for the future? Have you ever thought of picking up where any of your earlier stories left off?

RF: No, I haven't thought about continuing The Ninth Gland, but I've heard that a couple of times form people: "What happens next?" The Silkhound story in Grit Bath, which ended abruptly and had an open end, I do plan to finish that. I also have an upcoming thing with Penn Gillette; he's writing a story [that] I'm drawing. The first installment comes out in the Dark Horse Annual that's coming out in February. It's called The Adventures of Rheumy Peepers and Chunky Highlight. It's about two comedians who decide to become superheroes. It's going to be fun.

CI: It sounds different than your usual...

RF: It's much different, Penn's trying to keep it so that visually, I'll be okay with it. He's writing kind of grungy, atmospheric stuff for me to draw, rather than dappering it up a bit. I always liked his writing and he really likes my artwork, we figured we'd do it together and see how it came out. It's pretty interesting.

CI: When should that be out again?

RF: The first chapter should be out in February in The Dark Horse Presents Annual, which will have a Body Bags cover. After that, we're going to do more of them and eventually have a graphic novel. I think we'll be doing it with Oni, Bob Schreck owns that.
Posted by Christopher Irving at 11:42 AM