Influencing Comics #6: Once Upon a Time in an American Graphic Novelist’s DVD Player By Neil Kleid 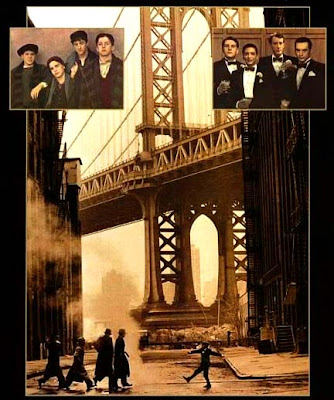 Blame my father; He made me watch it. Dad, you see, had a history of picking bad movies, and therefore I questioned his vehement recommendation. Every time our family descended on the local video store to grab choice films for Saturday night viewing fare, Dad inexplicably chose the one movie nobody wanted to see. And by “nobody” I refer to the great communal nobody of the entire suburb of Oak Park, Michigan, evident by the fact that all copies of said movie remained abandoned on the shelf, unloved, unwatched, unrented.
Dad’s based his skewed idea of how good a movie could be completely on the number of copies ordered by the store. Titanic could not be worth the time based on the plentiful copies out at the time or waiting to be snapped up. According to Dad, the movies with only one or two boxes resting on the shelf were truly worth our time —rare films like Windtalkers or Slipstream, each represented by two dusty boxes hoping to go unnoticed while sandwiched between blockbusters. These were his meat, justified by the fact that fewer copies meant less availability meant hidden gems. Slipstream, for the record, was no hidden gem.

My point being, Dad picked duds and urged us to seek out said duds despite their obvious box office failure, invisibility and absence from marketing venues, award shows and often, movie theatres themselves having gone straight to DVD (or that great, lost rewindable medium, videotape). Phone calls home or conversations around the dinner table often led to debates on his poor choices over the years, and his persistence in getting us to reconsider “classic” films he felt were worth our time. Cast a Giant Shadow was the constant refrain, like horrible jungle drums in the distance, heralding another round of “Not interested”/ “You’re missing out” that we hoped would never result in Dad actually heading out, renting the movie and forcing us to watch. But there were others. Many, many others. And amid the cream of his crop swam Sergio Leone’s nearly four hours long epic, Once Upon a Time in America.

Four hours? For a mob movie I’d never even heard of? You could watch two of the Godfather flicks in less that time (assuming, of course, you skimmed the “good” parts of G3, which there were admittedly few) or Goodfellas twice. Four hours equaled four episodes of The Sopranos, a time commitment even I, a student of mob history and lover of all things underworld, could not fathom during the course of my productive day. But a funny thing happened… during years of laughing off and avoiding my father’s self-appointed (or so I thought at the time) “classic” must-see list, several friends convinced me to sit down and finally watch one of them, The Great Escape. And you know what? I didn’t hate it. In fact, it became one of my favorite movies now, and like a good son, I reached out and apologized to Dad for not watching it sooner. In response, he urged me to try others like The Magnificent Seven (which I did, and enjoyed), Cast a Giant Shadow (didn’t, no regrets) and of course, Once Upon a Time in America.

The last one tweaked my interest, especially as I’d recently finished Rich Cohen’s book Tough Jews, the story of Murder Incorporated and history of the Jewish underworld in East New York. The time commitment was tough to get around, though… and then, as if a message from on high, I found myself out of work. Between interviews and a burgeoning comics career, there were vast periods of time where I, in fact, had nothing to do and so I bit: I rented Once Upon a Time in America, not knowing a thing about it, the characters, cast or anything other than that it was a Jewish mob story set in New York, and figured I’d watch in shifts. Of course, I finished it that night. Later that week, I wrote the first scene in the graphic novel that was to become Brownsville 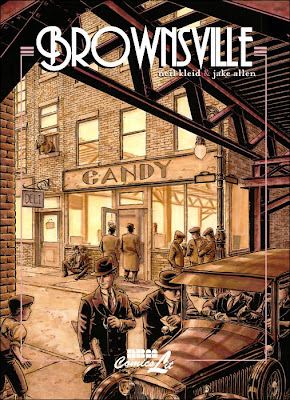 Brownsville, the graphic novel I created for NBM Publishing with Jake Allen, counts influences from mafia films and novels, history and transcripts, and comic book creators ranging from Will Eisner and Jack Kirby to Alan Moore and Harvey Pekar. But Leone’s epic tale of friends, love, crime and time gets pride of place as the second great influence and inspiration behind the book, sharing the spot with Cohen’s book.

The story follows a group of Jewish hoodlums that grow up on the Lower East Side, form a gang, and rise through the ranks of organized crime. It covers years, beginning in the Twenties and ending in the Sixties, bouncing back and forth via flashbacks dredged up by former hoodlum David “Noodles” Aaronson, an exiled mobster who’s returned to the old neighborhood after years away. Noodles —menacingly and melancholically portrayed by the great Robert DeNiro—follows the path of least resistance out of the Jewish ghetto, joining up with several pals (notably, James Woods’ Max, Noodles’ questionable best friend) to build names and fortunes, falls in love with beautiful dancer Deborah (played by Elizabeth McGovern and a young, flirtatiously appealing Jennifer Connelly) and winds up with a one-way ticket to prison. Rather than spoil the story for interested readers, I’ll merely point you in the direction of an all-star cast including Joe Pesci, Burt Young and Treat Williams; a gripping, epic journey of men who could have had it all and lost it; a snapshot of an era now lost, neighborhoods and businesses gone and forgotten to urban decay; a score that insinuates inside your head and makes you tear up each time you hear it; and a twist you probably see walking it’s way up Delancey, but shift to the edge of your seat waiting for its arrival. 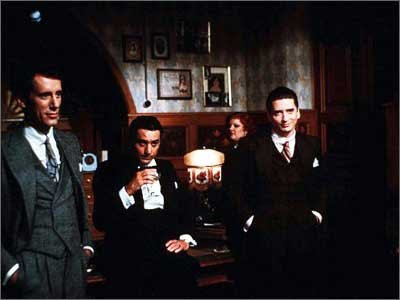 Leone, notable for spaghetti Westerns like A Fistful of Dollars and The Good, The Bad and the Ugly, turned down the chance to direct The Godfather to instead capture a time in American history where all bets were off and opportunity lurked around the corner if you could roll a drunk, escape a bull, fleece a shop, make a name and build an empire. But during the course of the four hour epic (the minutes of which fly by once you dive right in, I swear), as viewers follow poor Noodles from happy youth to hardened adulthood to bitter exile and then faded years, Leone shines a spotlight on the fairytale aspect of his film’s title: Once Upon a Time. Yes, ladies and gentlemen… this America exists no more. Between the Twenties and Sixties, America grew up, warred, died, privatized and decayed. Friends fell to the side, businesses flourished and then failed, like Fat Moe’s family business — a diner turned speakeasy turned diner again—once fat and happy, has fallen on lean times, as has Moe himself.

The hidden subtext, there to see if you think of the turbulence of time and what was happening as the film does, clicks into place and lets the viewer understand that Noodles’ early days are no more than a distant fairytale; a bedtime story he remembers in flashbacks and snippets, long obscured by failure, betrayal and heartbreak. It’s about friendship and ethnicity, social class and missed chances… it was Leone’s final film and it inspired me to produce my first real book. Brownsville, while a love letter to a world of Jewish gangsters a post-Holocaust Yid like me never knew, is also about fathers and sons, friendships and betrayals, and an America that exists no more. Following the intertwined lives of Allie “Tick Tock” Tannenbaum and Abe “Kid Twist” Reles, it shines a light on the differences in social class that led each man down the road he traveled, from entry into the mob all the way to entry in the Federal Witness Program where they ratted out pals and father figures in the mid-Forties.

The differences between Once Upon a Time in America and Brownsville are vast —one is fiction, the other is not—but Jake and I noticed enough similarities in theme, character and evolution to inject Leone’s tale into ours. Noodles is no wide-eyed, likeable Allie, nor is he vicious, rabid Reles, but his story is close enough to the men that walked the streets of Brooklyn and the Lower East Side, looking for a way out of the ghetto. Jake, whose attention to detail borders on obsessive (who draws every brick in a wall, or stitches immaculate herringbone patterns into a suit?), used Fat Moe’s family diner as a visual basis for the diner in early Brownsville scenes — and, in fact, the character of Yiddel seen in the showdown between Mendy Weiss and Pretty Amberg partway through the book, though based on an actual person, was visually based on Fat Moe himself.


Brownsville’s final scene, where poor old, acquitted Allie returns to Brooklyn after years away, remains my testament to lonely, lost Noodles’ homecoming from exile… back in a land that doesn’t even remember him, walking streets where his dead friends once roamed, long replaced by the inevitable flow of modern progress. Passionate for a man who long struggled with the idea of ever watching the movie, no? Once Upon a Time in America does that to you, stirs up passion and emotion, and despite the long running time, beckons you back for repeat viewings. Not even thirty years old, it feels timeless and while I cannot urge you enough to check it out, my Dad truly deserves the credit for the inspirational recommendation and influence of what I hope will one day become a “classic” graphic novel. That being said, Dad, there’s no way in hell I’m sitting through Cast a Giant Shadow unless there’s a graphic novel idea in there somewhere.

, a graphic novella about life, death, legacy and comics; Brownsville, a graphic novel about the Jewish mafia, and The Big Kahn, a drama about a family secret so well-hidden, even the family didn't discover it until it was too late. Neil has written for Marvel and Image Comics, DC Comics/Zuda, Shadowline, NBM, Dark Horse Comics, Slave Labor Graphics, Random House and Puffin Graphics. He is a founding member of online comics collective, The Chemistry Set and lives in New Jersey with his wife and son, working on three graphic novels, several comic book series, a webcomic, a novel and no sleep.
Neil's POD novel Coffin, will be available soon.

Posted by Christopher Irving at 7:45 AM