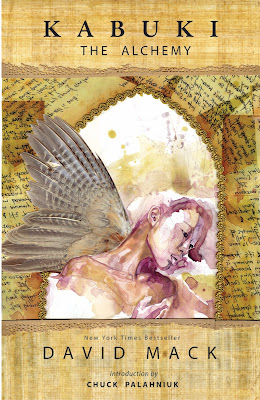 David Mack’s latest Kabuki Graphic Novel, The Alchemy, is not fun. It isn’t pleasant. It isn’t easy. It isn’t accessible. And it isn’t “kick ass.”


It is what it is and what it is is a motherfucker of a dense frustrating and difficult book. Not that it isn’t artful and beautiful—it is actually one of the most impressive looking books I’ve ever seen. I just didn’t enjoy it. Like I said, I was impressed. And a bit overwhelmed by the obvious care and artistry that went into its creation but that doesn’t mean I loved it. And that’s not to say it isn’t a valuable book; just not a fun book. If you read for entertainment only then you’re going to want to pass on it.

It’s an achievement and one that David Mack should be proud of. He has done some incredible things, pushing the limits of storytelling in expressive and wild ways. Inspiring and educating readers in exciting sections that tackle the issues of the act of creating art. Indeed, the self-help aspects are where the book is strongest. While reading one can’t help but feel strengthened as a creator and empowered to make beautiful this wretched little world.

It took me a long time to read, though. There was so much to take in on each page that the experience of communing with the text and images was draining. For the right person, perhaps someone a bit more serious minded than me, this book may well be the greatest damn comic book ever made. But for me, it was a bit of a slog. A soulful and enriching slog.

Most folks read for comfort, the authors they know what to expect from. Enough readers are cowards to make me question how much of one I am. The way we gravitate towards comfort zones in all aspects of entertainment marginalize books like this one and that’s a shame because it does have a lot to offer a careful reader. I don’t necessarily read to feel good, I read to feel. Despite not enjoying the book, I do feel it is a worthy and excellent piece.

Much in the same way that I appreciate jazz, wine, and poetry but spend my time on monster comics, Dungeons and Dragons, pornography and symphonic power metal I felt all the while I was reading it that this was supposed to be good for me. Heck, there were some great moments that inspired me as a creator but I still wasn’t entertained. 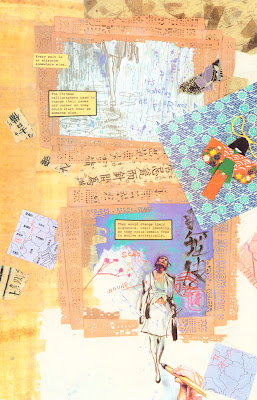 Not to be too negative though, I really flipped over the way the art shifted between passages and twisted into a miasma of styles that at first seemed quite impenetrable but upon careful reading soon opened up into a blossoming mushroom cloud of creative energy unfurled like a blast of the power cosmic into my back brain. I could look at this book for days but I hope I never have to read it again.
It also felt a bit random and loose at times. I loved David Mack’s harvesting of his quote collection and spinning of so many great sound bytes into a palatable narrative voice… but a fortune cookie collage? A rap song? For all the places where the book seemed purposeful there were in equal measure others that were self absorbed and whimsical. It had so many arbitrary things that I just couldn’t shake feeling that the only thing the book was missing was a big wet tea bag dripping in the center.

I thought the story lacked. There wasn’t enough happening on the page. It was an internal dialogue for the most part and that’s fine but I’m seeing this occurring more and more in comics, where the “dinosaur fight” is a single panel and the rest of the book is navel gazing super heroes. Not that I want super hero books to be pro wrestling matches but the physicality of their world is definitely one of the draws for me. I only started reading them again and I’m not bored of it yet. The externalizing of internal struggles is attractive to me. This book kept internalized struggles internal. It is supposed to exist in a world where magic and super-science are real and highly trained martial artists can do amazing things. I’d love to have seen a bit more of this in the foreground.

I didn’t feel comfortable that all the action was in reference to previous books (rather than rendered as flashbacks) or occurred off the page and in the background. For all the mentioning of a kabuki scarred youth movement, it’s never actually seen in the book. 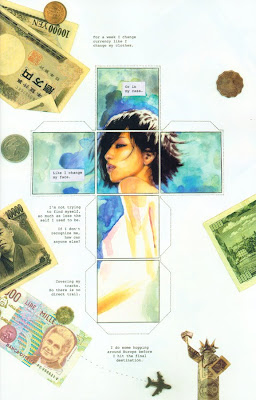 I understand the conceit of the book being (SPOILER ALERT) that in this alternate reality the previous Kabuki volumes were actually written by the character and the stand in for David Mack was merely the adaptor of her writings. These books spark a cultural rebellion which threatens to bring down the media conglomerate which used to employ her as an assassin. To accept this premise one would have to imagine a world where a graphic novel could spark a cultural revolution. I’d love to see it happen but I think the world we live in has sadly moved past printed media as an agent of change.

I am always bummed when a book or film about a writer doesn’t showcase enough of the actual writing the character is supposed to be producing. Especially writing so potent that it is supposed to start revolutions. I felt David Mack kind of “skirted the issue” on a lot of rather intriguing things. I would have loved to have read the writing and y’know… I wouldn’t have minded hearing this music they were producing. It was supposed to be so free and honest…what if I had hated listening to it? I do hate lots of music from all over the world. Some of it very free and honest. Especially when there are turntables involved.

Putting more of the actual art of the characters in the book would have strengthened it immensely. There were bits but not enough for me to feel that it justified a narrative where the act of creation was a transformative agent. 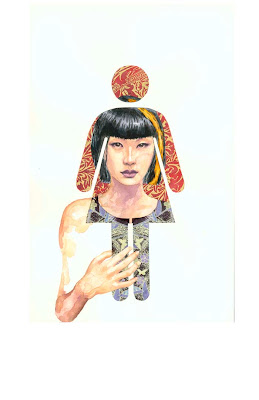 I also felt that the act of creation in the book was described nicely, with good passages reflecting the real difficulties of the act with strong emphasis placed on the “resistance” that we, as artists, face in our pursuits. That being said however, none of the characters actually seemed to struggle with the demons described so aptly in the narrative text. The act of creation, for them, was a point A to B line. If the book’s only real drama was centered on creation, then it was disappointing that this drama wasn’t used. Writing, drawing, painting…these can be painful and lonely things.

In the end, though, I’m not sure who I would recommend the book to. A young artist trying to find himself would value it because it does make creating (not to mention publishing and promoting) seem incredibly attainable. Not to mention its use of dynamic art styles and text-integral compositions are pretty freaking stunning.  It is pretty philosophical so, as I said, a more serious minded person than I would be a good candidate for a recommendation. It’s a flawed but gorgeous piece and as a reflection of Kabuki, who she is and where she is going, is a great portrait.


Jared Gniewek has worked in the music industry as a back line technician, performer, and promoter. He has also been a freelance writer whose work can be seen in the recent re-launch of Tales from the Crypt and heard on The Dark Sense, an audio anthology of the macabre for which he is also the story editor. Jared’s blog, Die By The Pen, outlines his philosophies and personal quest as a writer while he also masterminds a demented karoake game called Scary-Oke.
Posted by Christopher Irving at 9:13 PM