For the Love of Comics #8: Peace, Love, and Radio Shows 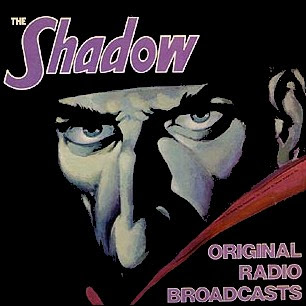 Words: Christopher Irving
I blame it all on The Shadow, on that boxed set of four cassette tapes of crackly old radio shows, the creepy melodrama of the invisible avenger, the pipe organs and the cackle, the “weed of crime” bearing bitter fruit, for hooking me on storytelling without pictures beyond the ones projected on my mind’s eye.

And I blame an old truck driver named Stan Silkowski.

It’s 2000 and I’m researching an old and obscure comic book character named The Blue Beetle from the 1940s for my own pet research project, a character that was the headliner for a third-tier comic book company named Fox Comics. This anticipated heavy-hitter not only had two comic book series, but also a comic strip (drawn by a young Jack Kirby, nonetheless) and a radio show. My father, a disc jockey in our hometown of Farmville, got me in touch with an old radio show aficionado for tips. 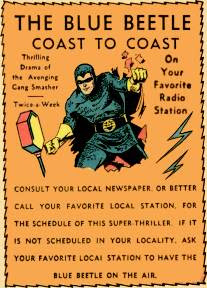 Enter Stan Silkowski, a retiree in his early ‘70s from Jersey. After a quick phone chat, I met him at Shoney’s to talk about radio shows. Stan had rosy cheeks, button eyes, an Irish nose, and an ever-present grin. He instantly gave the impression that life was not only good, but also great. After a stomach full of Shoney’s trademark crappy breakfast buffet and a great chat about life and the old radio shows, I left with a stack of cassette tapes lovingly dubbed by Stan, of this 1950s radio show Nightbeat. The star was Frank Lovejoy, who played the Blue Beetle for a handful of the character’s short-lived radio show, and later played cops in several movies and TV shows. 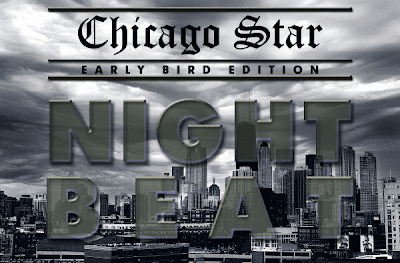 Nightbeat follows the adventures of the gruff Randy Stone, nightbeat reporter for the Chicago Star, as he meets interesting characters late at night while most of the city sleeps. Lovejoy’s delivery was that of a tough cop with a heart of gold, a sensitivity emerging between quips and Marlowe-esque lines.

I was hooked and, as Stan and I met up every month to keep in touch, he hooked me on others, like X Minus One (science fiction), The Lone Ranger, Suspense, and I got him into The Blue Beetle (which I had discovered on tapes, dreadful show that it was) and the Superman shows I’d been given by an old friend. Stan, in essence, was an old pal and the closest thing I had to a grandfather at the time. 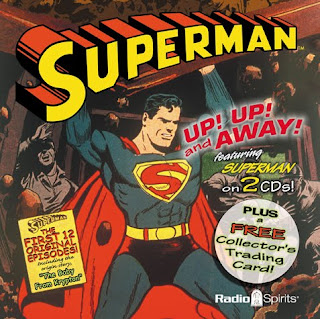 Time passed and life, as it always will, unforgivingly changed with it. Stan and his wife Shirley wound up moving away, first to Jersey, and then to Florida. I got divorced and moved around a bit myself. In the meantime, I found new, cheaper ways to track down my radio shows online, and gained an obscene collection of burned CDs that were eventually donated to friends.

I was holding out a surprise for Stan in 2006: the publication of my book on the Blue Beetle’s history, with him mentioned in the radio show section. When it was off to the printer’s, I got the news.

Stan passed away in the hospital. He’d been sick.

And I never told him the news of the book. I finally got my copies a couple of weeks after his death.

Last week, I’m driving home to Brooklyn from Virginia, a six-hour trip, listening to radio show after radio show – Suspense. Father Knows Best. Blackstone the Magic Detective.  Yours Truly, Johnny Dollar. Jack Benny. Have Gun, Will Travel. Broadway is My Beat. Origin of Superstition—and I think of Stan, just as I do every time I hear an outdated commercial for Blue Coal or Lucky Strike.

Every time he copied those shows for me, he’d play DJ with a recorded message beforehand. I dig them up on occassion to remember him by, as he always signs off the same way:

“Peace and Love.”
Posted by Christopher Irving at 7:13 AM