For the Love of Comics #08: Enjoy the Silence 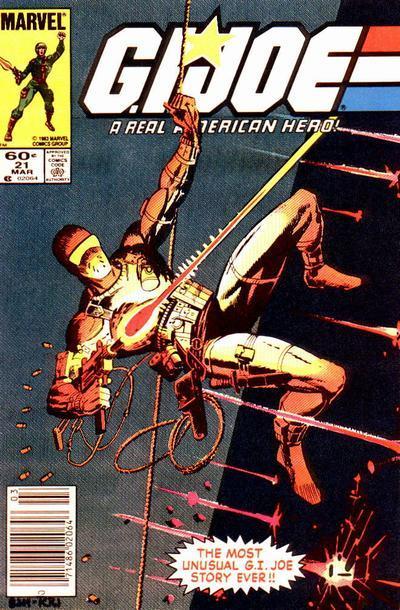 “The one thing that I remember best about you is that you had a letter published in an issue of G.I. Joe,” my long, lost friend said. “You complained about the silent issue.”

I had just exited the stage after our first Graphic NYC panel at King Con, Brooklyn, when a man approached me.


“Hey – are you the same Seth Kushner who went to Manhattan Beach Jewish Center Day camp?”


I told him that indeed I was, and though he was completely unrecognizable twenty-five years later, I remembered him well once he identified himself.  We chatted for a few minutes and before parting ways, perhaps for another twenty-five years, he mentioned my G.I. Joe letter.

I was impressed by his memory and found his statement to be coincidental because I’d recently been thinking about G.I. Joe # 21, Silent Interlude.  I’ve been aware for some time that the particular issue was responsible for inspiring many of today’s comics creators.  But, I remember feeling cheated by it.  So much so, that it spurred me, at age ten, to write the following letter, which was printed in the letter’s page of G.I. Joe #24, dated June 1984.  I’ve reproduced it here exactly as it printed, along with the misspelling of my name.

I’ve been collecting G.I. JOE since the first issue.  Every one has been superb, except issue #21.  It could have been one of the best issues, if it had some dialogue.  Please never make an issue like that again.  By the way, I’m thrilled that Duke will be making his debut next issue.

Those are not the words of a satisfied 10 year-old customer.

I recently had the pleasure to meet Larry Hama, who wrote most of Marvel’s G.I. Joe run, including #21, and I embarrassingly admitted to writing the letter of complaint. He laughed, and had this to say-

“We got lots of flak from it. Kids wrote in and said ‘I got a faulty copy, all the words are gone,’ or ‘you know, I felt cheated. I went through this whole thing in five minutes, and I didn’t get my money’s worth because there were no words.’ We got letters like that.”

In my letter, I do say, “It could have been one of the best issues,” so clearly I recognized some greatness.  After talking with Larry, I decided to venture into my mom’s basement and dig out my copy of G.I. Joe #21 to revisit it as an adult and see how I felt about it. 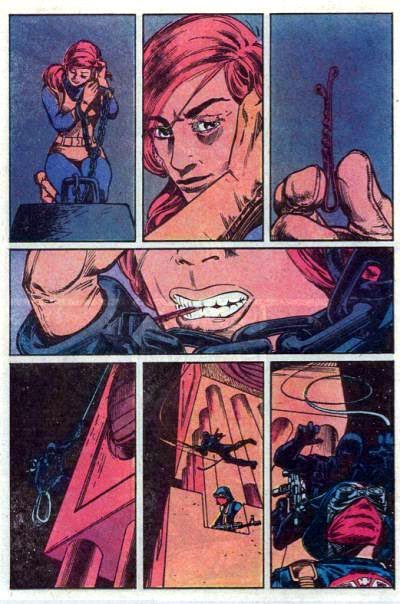 I reread the issue and was struck by several things.  First, I was surprised to learn that Larry Hama was credited with story AND breakdowns, and Steve Leialoha with finishes.  The fact that Larry wrote and drew it tells me that the issue really was his baby.

Moving on from the credits, it’s amazing how clear the story is with just visuals to tell it.  Yes, it’s a relatively simple tale of Snake-Eyes infiltrating Destro’s Castle to rescue Scarlet and battling Storm Shadow and a bunch of Ninja along the way.  But, there is a real clarity to the storytelling and a simplicity to it that is simply not found in comics of that era.  I would even go as far as to compare the pacing of the action and flow of the panels to work Frank Miller did in Daredevil a few years earlier.

A sequence from then end of the book where Storm Shadow throws his sword at Scarlet is broken into six panels.

The top horizontal panel has the Ninja holding his sword, taking aim.

The next horizontal panel below gives the reader a wide shot of the scene.  The sword has left Storm Shadow’s hand and is flying towards Snake-Eyes, while Scarlet, in her stolen Cobra C.L.A.W. is landing in front of Snake-Eyes, blocking the sword’s path.

Next, is a thin horizontal of Storm Shadow’s eyes. 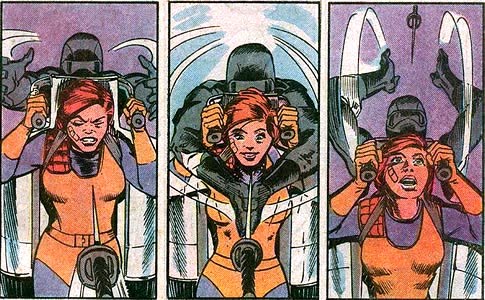 Finally, there is a row of three panels across.  The first has the sword entering the bottom of the frame, about to impale Scarlet, who has her eyes closed and teeth gritted.  Behind her, Snake-Eyes is reaching forward with his arms.

The middle panel, which has the same composition as the previous, has Snake Eyes, still behind Scarlet, clapping his hands together to catch the sword, Scarlet expression has changed to happy relief.

The final panel, again same composition, has Snake-Eyes hurling the sword over his head behind him, and Scarlet looking up in disbelief.

The action on the page flows like a film storyboard, allowing the reader to clearly follow the action precisely.

G.I. Joe #21 is from an era of comics littered with exposition and thought balloons and panels that usually did not flow from one to the other with the smoothness that we modern readers are accustomed.

Larry said that I must have been one of the kids that “didn’t get it.”  He was right.  But now I do, and I recognize why Silent Interlude has become a benchmark of comics.  In Shaenon K. Garrity’s recent article at Comixology, she quotes Scott McCloud as saying, "I've come to realize that comic (G.I. Joe # 21) was a kind of watershed moment for cartoonists of your generation.”

Larry Hama was ahead of his time, and only now, as the kids who read G.I. Joe have become the current generation of comics creators, do we see how much of an influence he had.

Sorry about the whiney letter, Larry! 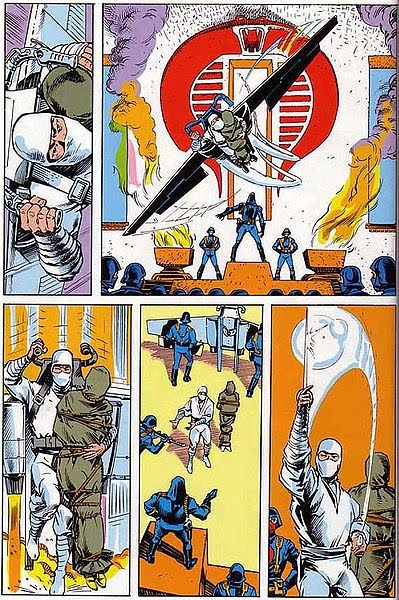 Posted by Christopher Irving at 7:30 AM