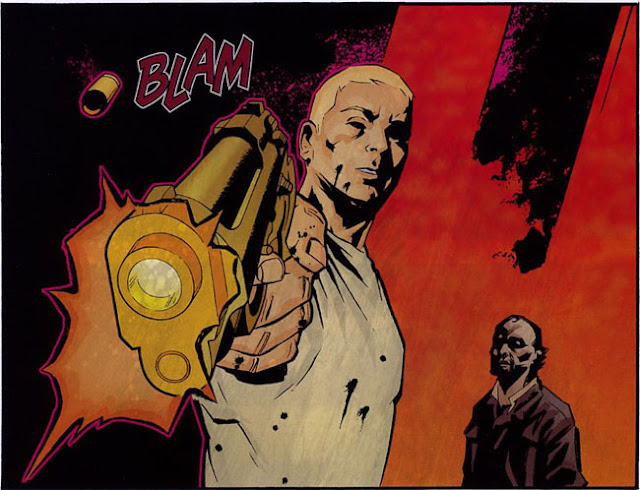 In the world of comics, like in fashion, everything old eventually becomes new again.  Jonah Hex and the Justice Society of America both once again have ongoing titles, Spider-Man is single once more, Bucky Barnes and Jason Todd are back among the living, and Bruce Wayne will be soon as well.  Whether any particular dead character or series should be revived is a matter for the fans to debate, but as long as publishers feel a market exists, they will continue to recycle old properties and try to make them relevant for contemporary audiences.
In 2009 it was G.I. Joe’s turn, thanks to the summer release of the highly anticipated live-action film, G.I. Joe: The Rise of Cobra.  Hoping to cash in on the buzz around the movie, IDW acquired the rights to the G.I. Joe comic in 2008 and completely rebooted the property’s continuity, releasing a new ongoing title and two spin-off mini-series last year.

The second of these spin-offs was G.I. Joe: Cobra

, written by the team of Christos Gage (Union Jack, Civil War: House of M) and Mike Costa (Transformers), and penciled by Antonio Fuso (Dark Reign: Made Men, House of Mystery).  Cobra is a noir-tinted examination of the inner-workings and objectives of the mysterious terrorist organization known as Cobra as seen through the eyes of G.I. Joe’s wisecracking undercover operative, Chuckles.

In reading the trade paperback, I couldn’t help but notice the similarities the story bore to the Wildstorm mini-series Sleeper, by Ed Brubaker and Sean Phillips. Here, as in Sleeper, we have an anti-hero who goes under deep cover to infiltrate a terrorist organization in order to take it down from within, committing progressively worse and worse crimes against his fellow man in order to ascend the ranks of that group until he eventually begins to lose track of his own values and what side he’s really on.  In GI Joe: Cobra, Chuckles doesn’t lose his way to the extent that Brubaker’s Holden Carver does, and perhaps the story is a bit less believable for that.  Yet in spite of these similarities to Sleeper, I came to realize two things as I read GI Joe: Cobra – (1) that I was thoroughly enjoying the ride nonetheless, and (2) that I wasn’t able to predict where it was taking me. 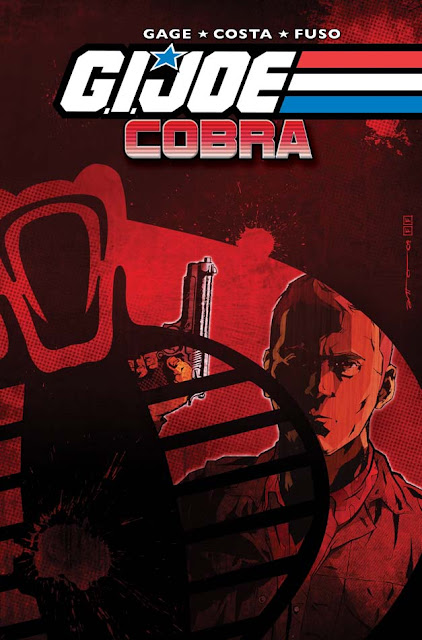 The credit for that goes to Gage and Costa, whose contemporary take on the GI Joe franchise is hard-hitting, complex and definitely not for kids.  Unlike Hasbro’s and Marvel’s 1980’s version of Cobra, essentially a uniformed but nationless army marching behind a fang-adorned flag of generic evil, Gage’s reinterpretation is much more insidiously au courant. This new Cobra is more akin to Al-Qaeda, with its agents operating under the radar through front businesses, destabilizing governments by conducting terror operations that inspire fear and incite chaos.  Such an enemy is all-too familiar to a modern audience that would consider being incinerated in a nuclear exchange a far less likely scenario than unwittingly sitting next to a suicide bomber on their morning subway commute.

Gage’s and Costa’s spin on the modern Joes also reflects this shift in values.  This new G.I. Joe unit places greater value on intelligence, counter-intelligence and black operations than in outright ass-kicking, mirroring a real world American military that has never shirked from operating in the shadows.  For this reason, Chuckles is the perfect protagonist for Gage’s modern story of intrigue and espionage.  Denounced by General Hawk as a wiseass and slacker with sociopathic tendencies, Chuckles is publicly dismissed from G.I. Joe’s ranks and then secretly re-commissioned by Hawk for deployment on a classified mission to infiltrate a terrorist cabal eventually revealed to be Cobra.  He begins working his way steadily downward into the darkest depths of the international terrorist community, committing various atrocities under assumed identities until his activity is noticed by the mysterious Cobra agent known as Mr. X.  Chuckles is soon brought into the fold, and as he gets closer and closer to his objective of identifying Cobra’s inner circle of leaders and revealing their true mission, he becomes increasingly isolated from the Joes and his own morals, until he gets to the point where it seems doubtful that he can ever come back. 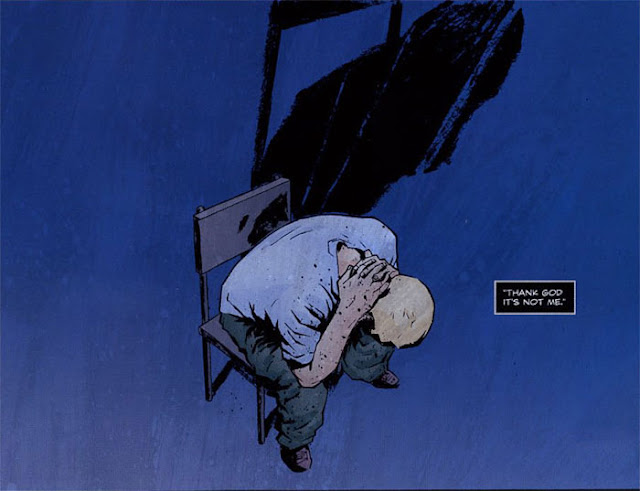 In the interest of keeping the plot’s twists and turns fully tangled for those who haven’t picked up the book, I’ll leave my synopsis at that.  But I found this story to be a real page-turner, with some thoroughly satisfying “holy shit” moments, and plenty of action expertly illustrated by Fuso.  The drama is character-driven, and Chuckles is given some real depth that longtime G.I. Joe fans should find pleasantly surprising – his constant wisecracking comes off as a bit corny at first, but soon becomes endearing as the reader comes to understand that that this is his only mechanism for coping with the constant fear of his cover being blown.

If I have one critique of Chuckles’  characterization is that he could have been shown to experience the psychological repercussions of his own actions more fully, and more dramatically.  Chuckles does some seriously dirty deeds for the sake of his mission, one in particular at the book’s climax (which I won’t spoil here) is terrible enough that a lesser soldier in the same situation might consider putting a bullet in his own brain afterward rather than having to live with what he had done.  But Chuckles never seems to feel the full weight of committing that act – he is shown to feel anxiety throughout the mission, but his stress level does not increase markedly after this incident.  Instead, Chuckles is immediately able to see clearly enough to levy the blame for what happened on Cobra and Mr. X for putting him in that situation, and moves decisively to take his vengeance.  If the audience was allowed to see that committing this one act had a more significant effect upon Chuckles’ psyche, that he actually had a conscience, Gage’s well-crafted ending would have had an even greater dramatic impact. 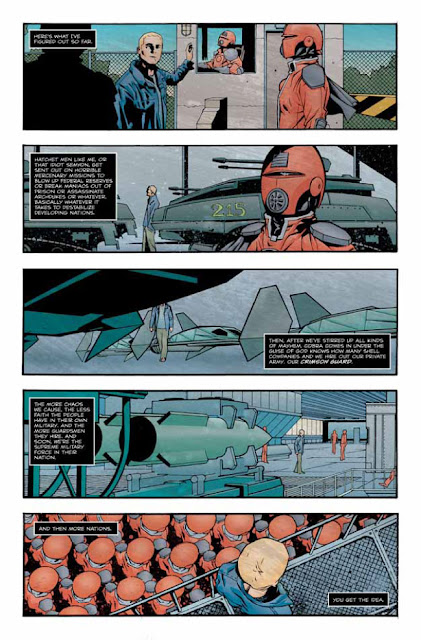 But even considering this critique, Gage, Costa and Fuso have succeeded in telling a suspenseful, skillfully-paced story with adult themes – that alone is reason enough even for readers unfamiliar with G.I. Joe to pick up this book.   When you consider that they were able to accomplish this using characters based on children’s toys, this work is all the more impressive.  As a kid growing up in the 80’s, I watched countless episodes of the cartoon series after school, wishing that once, just once, a Joe or Cobra wouldn’t bail out of an exploding fighter jet just in time, or that a rifle discharged in a firefight would actually find a human target.  This book, far more so than the live-action movie directed by Stephen Sommers, has given me something I had nearly forgotten I’d ever wanted – the chance to know what it might be like if G.I. Joe and Cobra existed in the real world.  And knowing is… well, you get the idea.

Miles Archer loves crime comics, old school hip-hop and The Super-Friends. He has profiled some very interesting artists in film, music, fashion and comics for publications such as Mixer, Mass Appeal, YRB and Big Shot. He doesn’t have his own website yet, but hopes you won’t think any less of him as a person because of it. He lives in Harlem with his wife and what must be the last standard-definition television on the eastern seaboard.
Posted by Christopher Irving at 7:32 AM