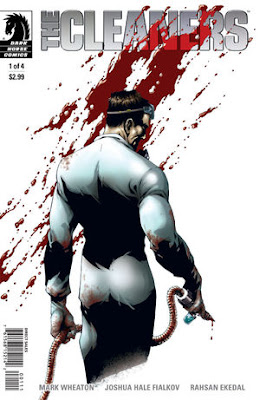 After putting down the fourth issue of The Cleaners

, I did something I almost never do – I flipped to the back and read the letters to the editor. I just had to know what other readers had to say about this gruesome and twisted story of a crime scene clean-up crew operating in the greater Los Angeles area. But only a few paragraphs into editor Shawna Gore’s thank you note to the readers, I read something every bit as shocking and horrifying as the 120 pages of blood and guts that comprised the story itself –that Dark Horse has not planned any future issues.


This is a crying shame because The Cleaners’ first story arc, entitled “Absent Bodies,” is a great read. In the first issue, Robert Bellarmine, former surgeon turned entrepreneur and chief proprietor of Bellarmine Trauma Site Restoration and Reclamation, wins a contract in the valley to clean up a neighborhood street soaked with enough blood to keep an entire blood bank well-stocked. Because no bodies were found at the scene and lab tests were inconclusive as to the blood’s origin (whether animal or human), the LAPD halts their investigation. But as Bellarmine’s team works long hours to contain and clean up the biohazard this quiet suburban block has become, they learn that the blood can be matched to as many as seventeen different people reported missing from this town and other valley suburbs nearby over a thirty-year span. Eventually one of the neighborhood children goes missing, and when Bellarmine connects this disappearance with the others, he comes into contact with a supernatural threat that has haunted the area for generations.


Authored by the team of Mark Wheaton and Joshua Hale Fialkov, The Cleaners is equal parts police procedural, mystery, horror fiction, and sci-fi thriller. One might expect the combination of all these genres to result in a plot messier than one of Bellarmine’s crime scenes, but “Absent Bodies” is quite tidily-written, or as least as tidy as could be expected of a this blood-spattered gorefest of a story. This is largely thanks to Wheaton’s screenwriting experience, which is evident in the realistic dialogue and cinematic quality of the panel layouts and arrangements. Wheaton’s experience writing about human blood and viscera was no small asset to this project either – several of his pieces have been published in Fangoria and similar mags in the past, and horror films like The Messengers (2007) and Friday the 13th (2009) are among his recent screenwriting credits. 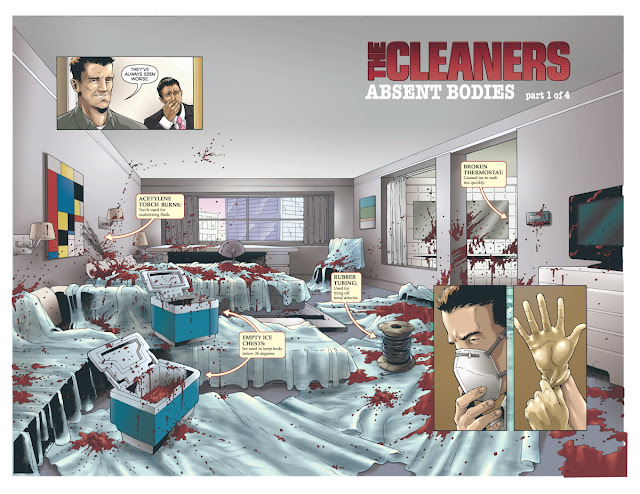 Though Wheaton claims responsibility for the story and underlying concepts, the success of its execution as a comic depended largely upon solid contributions from his partners. As a veteran comics author, Fialkov (Elk’s Run, Tumor) served as a guiding hand to keep Wheaton’s dialogue and captions scaled back, allowing the pencil work of Rahsan Ekedal (Creepy, The Crazies) to tell the story. Ekedal’s approach is that of a classic illustrator, and his meticulously detailed panels at times evoke, the work of Frank Quitely. Though his style is realistic, Ekedal’s unembellished illustrations achieve their most dramatic effect in panels where the action depicted is unrealistic or preternatural – for instance, a bird’s eye perspective shot in the fourth chapter of a body bleeding out a quantity of blood extensive enough to fill the entire panel. In a panel such as this, Ekedal represents visually the striking contrasts between the world of science and the world of the supernatural that are at the heart of the story.


Ekedal further contributes to the cinematic feel of the book by mimicking cinematographic techniques made famous in films, such as one used in David Fincher’s film version of Fight Club. In the film, the protagonist’s existence as a mindless cog in the consumer machine is illustrated by a wide shot panning from left to right in his apartment as balloons pop up out of each piece of furniture indicating the price for which it was purchased. In the second page of The Cleaners #1, Ekedal recreates this effect in a ritzy hotel suite using similar balloons to identify various pieces of equipment and biological detritus left behind after a suspected illegal organ harvesting. Ekedal and the writing team smartly use this technique more than once in “Absent Bodies,” thus getting the audience acquainted with the tools and techniques used in the business of crime scene restoration without having Bellarmine give a boring, training manual-style tutorial on his methods.

As an ongoing series, The Cleaners has a lot to offer fans of both the horror and crime genres of comics. Bellarmine is methodical, professional, dedicated and brilliant, exactly the type of protagonist that any CSI or Sherlock Holmes fan can really get behind. He also has depth substantial enough for exploration in future Cleaners storylines, if Dark Horse sees fit to publish any. There is a sadness to his existence that you might expect to see in a man who used to be a respected medical professional, and is wildly overqualified to scrub assorted bodily fluids out of carpet fibers. Exactly why Bellarmine quit his surgical practice isn’t fully divulged in this first arc, but we are allowed a few brief glimpses into a past life that included a wife with an unidentified terminal illness, and it can only be assumed that tragic events involving her somehow compelled him to change careers. 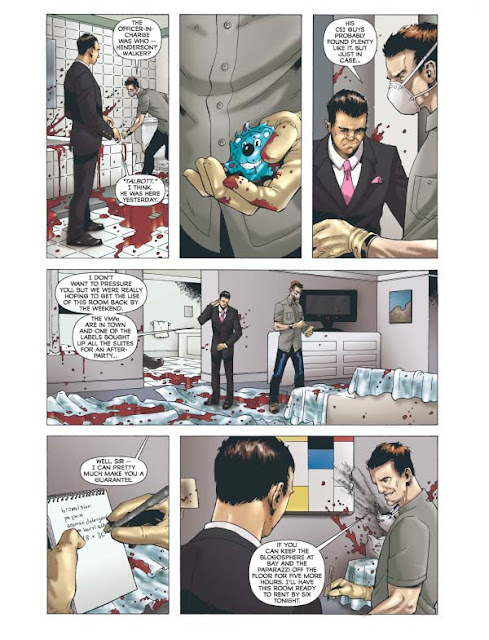 In Bellarmine’s employees, Wheaton and Fialkov have even more material for future subplots. His office is run by Harlan, a gun-toting septuagenarian with contacts in the city and county police departments. Bellarmine is assisted in the actual work of cleaning up crime scenes by Knut, a man with a dark side that could rival Ted Bundy’s. Knut’s unique “hobbies” (presumably pursued without Bellarmine’s knowledge) are alluded to in some chilling panels in the third and fourth issues, and if Dark Horse was to greenlight production on a new Cleaners storyline, they’d have a Knut storyline teed up to begin right where “Absent Bodies” left off.
But alas, for now there are no such plans. Rumor has it that Wheaton and Dark Horse are floating some screenplays for a film based on The Cleaners, and it’s likely that the future of this property as a comic could depend largely on the success of these efforts. In the meantime, crime and horror comic junkies will have to be content to pick up the back issues or The Cleaners: Absent Bodies, just released as a trade paperback in January.
I just hope that, for their sakes, the good folks at Dark Horse don’t wait too long to publish more issues of The Cleaners – after all, we don’t want things to get bloody.
Miles Archer loves crime comics, old school hip-hop and The Super-Friends. He has profiled some very interesting artists in film, music, fashion and comics for publications such as Mixer, Mass Appeal, YRB and Big Shot. He doesn’t have his own website yet, but hopes you won’t think any less of him as a person because of it. He lives in Harlem with his wife and what must be the last standard-definition television on the eastern seaboard.
Posted by Christopher Irving at 2:36 PM