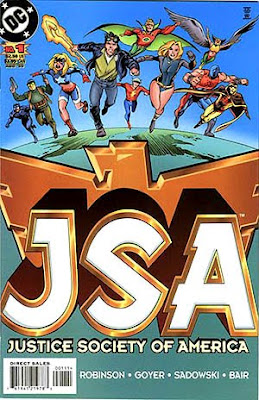 Words: Christopher Irving
This interview with screenwriter and comic book writer David Goyer took place shortly after his relaunch of Justice Society of America with writers James Robinson and then-newcomer Geoff Johns, for DC Comics in 1999. Goyer later went on to write the definitive Batman origin film, Batman Begins, as well as two more Blade films, the final of which he directed.

CHRISTOPHER IRVING: I understand JSA has been quite successful recently. How do you make it accessible to new readers with characters that date back sixty years?

DAVID GOYER: It’s a balance: we took the three original members, the old-timers, and then we took a number of second generation heroes, and then we created some new ones. The whole debate was “Are we only going to have old-timers, and only going to do stories that are retro, dealing with old baggage, or are we going to delve into new territory?”
It was a really conscious decision, on our part, to have Mordru in the first story arc since the JSA has such a limited rogue’s gallery. It seems the ten lame villains that you use over and over again. We wanted to introduce a real heavy from the DC Universe. Mordru is going to play a big part in the new JSA, and he’ll definitely be back. We’re doing the same thing with Black Adam in #6, and Ian Karkull will be in issues #7 through #9.

CI: I understand that Hawkman is coming back. What can you tell me about that?

DG: There is going to be a JLA/ JSA crossover that is going to deal with Hawkman returning. I can’t tell you which Hawkman. It’s going to be a four-parter and a very big story, some time between issues #15 and #20 of JSA.

CI: How do you feel the JSA members stand up against today’s heroes, as far as the concepts and characters themselves?

DG: To me, the new JSA is about legacy. Alan Scott, Jay Garrick, and Ted Grant are the people that were the inspirations for Batman and the JLA. They came first, so they have a level of experience that nobody else could even come close to. They’re also unflappable, they’ve been fighting the good fight for almost sixty years now. One of the things we’ve been wanting to do in particular with Alan Scott as Sentinel is establish that, among the DC Universe, he’s probably one of the ten most powerful people. Some of that will be seen from issues #7 through #9; he’s spectacularly powerful. Some people say the JSA are not as powerful as the JLA. It’s true that Jay Garrick is not quite as fast as Wally, but has a lot more experience.

CI: You picked up Starman with James Robinson a little while back. How was it to step into a book with a definite beginning, middle, and end, with a writer who had a very definite vision of it. Was it difficult to become part of that vision?

DG: I was aware of the big picture because I was friends with James. He had been planning on this big space arc, but is not so good with space and science fiction, so he asked me if I would come on for that arc. He had the broad elements worked out, but he didn’t really know what was going to happen once they got there. So, there was a lot of flexibility once we got into it.

The next issue is my last issue, I just came on for the space arc, once [Starman] comes back to Opal City, James is perfectly capable of handling Opal City. However, I’ve co-plotted with James on the very last story of Starman, whenever those final three issues happen. I think it’s about fifteen issues away, or so.

CI: How has working with Geoff Johns gone so far, after having worked with James on Starman and the initial JSA outing?

DG: Geoff is very different from James: he’s got this exuberant and youthful enthusiasm. It’s funny, Geoff loves continuity and bringing back these obscure characters, maybe even more than James, which is kind of weird. Lots of times, I’m having to rein stuff in and say “No, that’s too obscure, we can’t do that. Ten people are going to give a crap about that.” On the other hand, I was the person who decided to bring The Scarab, who nobody had heard of.

DG: He was in a Vertigo mini-series that was originally a proposal for a Dr. Fate series that was rejected because it was too extreme. But it did take place in the DC Universe and, in the limited series, he’d been around since the 1940’s and fought alongside Dr. Fate and The Spectre. Because of the recent arc, and the rebirth of Dr. Fate and since literally the Scarab in Egyptian mythology represents rebirth, I thought The Scarab would be perfect (also because of Hector Hall’s career as The Silver Scarab) midwife for the new Dr. Fate.

CI: How have the reactions to making Hector Hall, who didn’t really die a very noble death in the pages of Neil Gaiman’s Sandman, was it really expected from fandom?

DG: [Reaction has been ] Largely and extremely positive, about eight percent of the people loved it. We thought he was a character who’d been kind of maligned, and one who had lots of strange stuff happen to him, and reincarnation had been a large part of his life. All along, what we wanted to do with JSA is kill some people off and bring some back, so we’re interested in creating a balance. We’d already said that there would be another Infinity, Inc. member in the new JSA. It’s going to take about a year for the audience to learn how Dr. Fate will be different with Hector Hall under the helm, but he will be different.
He will go try to find Lyta [The Fury from Infinity], and that’ll be coming up around #17. We’re going to deal with her, coming up.

CI: Will he deal with Daniel at all, the new Sandman?

DG: We’ll have to see, it’s very touchy, even Daniel’s appearance in issue #1 involved a lot of negotiations with the Vertigo people. They don’t like Daniel showing up very much so, we’ll see.

CI: What else is coming up for JSA?

DG: The next big arc is with Sentinel and Obsidian, and is going to shake a lot of people up. Then, there’s a great issue that is a spotlight on Ted Grant as Wildcat. After that is three enormous stories that all link. Things are going to get progressively more serious and big-scale. There is a two-parter that has to do with Kobra and, after that, they’re going after Extant for the murders of other members of the JSA. They’re three stories that all link into one another. There’s another really, really big story after that, so the whole second year’s going to be very tumultuous. 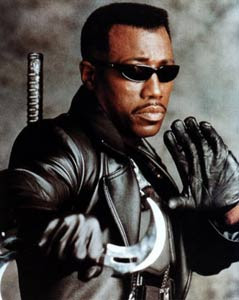 CI: I think that it is pretty fair to say that the Blade movie was rather successful. Did you expect it to be as successful as it was, and did you ever plan on penning a sequel?

DG: I thought Blade would be successful, and the reason it caught people off-guard is that nobody was taking Blade seriously, and it was kind of off peoples’ radar. There wasn’t any buzz about Blade at all. I knew that the great thing about Blade was that New Line Cinema let Steve Norrington, Wesley Snipes and I totally have free reign. That movie is the movie we wanted to make, and I knew how hard-core the film was (it’s very violent, yet true to itself) when it came out that it would be viewed as not just this lame, studio-action movie and was very committed. I’d also been in the preview screenings, and they were the best experience of my life: people were jumping out of their seats cheering. I knew we had something. I remember being at a party the week before Blade opened, and I was talking to some people that didn’t know I had written it, and they were just slamming it and talking about how it was just going to be another Spawn, and how lame it was going to be.

CI: What can you tell me about this sequel?

DG: I’d originally had no intention of doing a sequel, but I stumbled upon an idea that I liked, and Wesley and New Line liked it. Having written it, I think it’s going to be a much better film than the first one. All I can say is that it’s about Blade having to team up with the vampires because something comes along that is so horrible that they have no choice but. He’s forced to team up with the one thing that he hates more than anything else in the world, and he knows that once this is over (if it’s over) they’re going to try to kill him, and vice versa.

CI: I keep hearing rumors about Morbius being in that. Can you confirm or deny that at all?

DG: I was toying around with the idea, and there is a character in the sequel who, if you use your imagination, could have been Morbius, but it’s not happening. I toyed around with doing it. 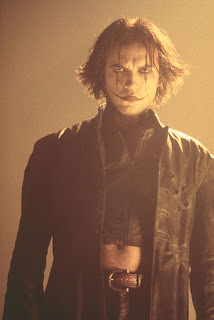 CI: You wrote The Crow: City of Angels, Dark City, and the Nick Fury television movie. Sitting down and watching those, did you honestly feel that the production teams did the scripts justice?

DG: The City of Angels is an abortion, that’s a horrible movie, I wish I could strike that from my record. I think Nick Fury was fine for TV, but I actually didn’t mind David Hasselhoff, I thought he was pretty funny. I wrote the script very tongue-in-cheek, but I think the director took it more seriously. It was meant as a loving homage, almost a parody, and the director just didn’t get that at all. I think the production value for the TV movie was pretty good, but it was just horrible. The woman that played Madam Viper had this horrible German accent, and it was pretty bad. 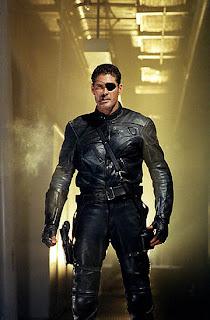 Dark City was the other one that I was happy with. I was fortunate enough to have two movies come out that were largely the movies I’d written and envisioned. I was more involved with the director in terms of looking at early cuts, and looking at the cast and such all the way.

CI: What can you tell me about other script-writing projects, such as Dr. Strange and Ghost Rider?

DG: I just finished a script based off a Harlan Ellison book, Phoenix Without Ashes, which I just turned into Sony. It’s a big movie, and I just turned it in a week ago, but they seem to like it a lot. I did a script for Columbia for Dr. Strange, and it went into turnaround, and then Warner Brothers was going to pick it up for turnaround, then the new regime at Columbia decided they wanted it. It is an “R” rated film with Lovecraft-ian undertones, but I haven’t made a deal yet to work on it. They just closed the deal for renewing Dr. Strange a week ago, but it’s still on the horizon.

CI: What about Venom?

DG: I did a draft for New Line, but that’s not going anywhere.

CI: And that was without Spider-Man’s involvement?

DG: Which is actually fairly easy to do, believe it or not.
Posted by Christopher Irving at 11:43 AM