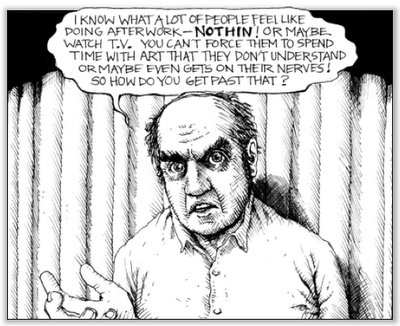 This Q and A interview was done for a Comics Buyer's Guide article on autobiographical comics in 2000. Note, towards the end, Harvey's position on an American Splendor movie...

CHRISTOPHER IRVING: When did you start American Splendor, and what made you decide to document your life in comic book form?

HARVEY PEKAR: I started doing my stories, and getting them published, in 1972. It’s kind of complicated as to how I started getting into them. Robert Crumb had been a friend of mine, and is still a friend of mine, and we used to live in the same neighborhood, just down the corner. I used to read a lot of comics when I was a kid, and used to collect them but, by the time I was eleven years old, the stuff I had seen I’d already thought I’d outgrown. It was kid’s stuff, with superheroes and things like that. I enjoyed Mad in the fifties. When I met Crumb, and saw what he was doing as early as 1962, it dawned on me that comics were not the limited medium that people generally think they are, that you could do any type of piece and do a good job of it in comics, fiction or non-fiction. It just impressed me that they were, and still are, tremendously under-utilized. Just imagine if all the prose that came out were talking animals and superheroes. I think that comics are a medium comparable to prose, theater, television…anything. I’d always been a kind of street corner comedian, and the class clown in school, and I just was wondering if I could write some stories that would be unusual for comics, and see if they would come off. I thought that they would. I wrote some scripts…I’m not an illustrator, but I wrote them in storyboard fashion with stick figures and balloons and captions. I showed some to Crumb, who liked them and was staying at my house at the time, and he illustrated them. That’s how I got started. After I got started, I really got excited about comics, because I thought that there was so much a guy could do with them. I was still a writer, and had been writing about jazz, and other things, and getting my stuff published since 1959. But this really excited me, because it seemed that there was so much you could do in comics. I’ve been in them ever since, and I’ve been real happy with the way things have gone.

CI: I noticed that you’ve done the histories of the blues musicians on top of your own stories?

HP: There were some about blues musicians, and some about jazz and rock.

CI: Would you consider yourself as a music historian, on top of an autobiographer? 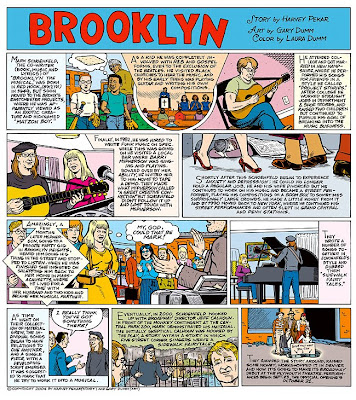 HP: I started out as a jazz critic, and I still do an awful lot of jazz criticism, as well as other types of music criticism. My main job is that I’m a file clerk at the V.A. hospital. I’ve been here for about 35 years. I’ve done these other writing things, with which I can make a living. I’ve been a jazz critic since 1959. I’ve written about the blues occasionally, and jazz is the area which I’m interested mainly in. I do like to dab into other areas of music.

CI: You self-published originally, then went to Dark Horse Comics. What led to your going over there?

HP: In 1990, I was diagnosed with cancer, and had an issue of the comic ready to go. The treatment for that is rough, it’s very rough when you get chemotherapy like I was getting every week, your hair falls out and you get really weak. I just didn’t have the physical strength to go around to carry the books around. I was just wasted by the chemotherapy treatment. I checked around to see if anyone else could publish the book, and Tundra published it the first year I had cancer. The next year, I went to Dark Horse. 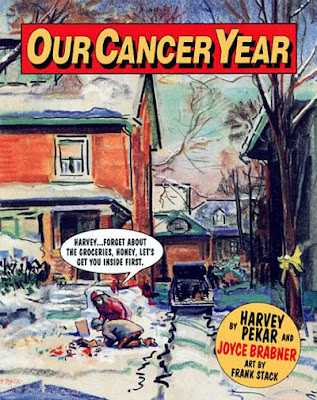 CI: How would you say that your work compares to other works on the comics rack?

HP: It’s way different. Most comics are about fantasy of one kind or another, and I emphasize realism. I don’t deal with things like the Earth about to blow up, and someone has to come and save it, or else it will be the end of the human race. I write about the stuff I see and the stuff I know, the stuff that people pass by. People don’t want to think about everyday life. If comics were utilized the way they should be, there’d be as many different kinds of comic books as there were prose books, and you wouldn’t be asking a question like that, which isn’t to say that it’s an unreasonable question. There are so many prose books that people don’t say (to guys that are writing realistic novels) ‘What does your stuff have in common with science fiction?’

It’s true that they have in common the use of the comic form but, in other ways, they’re vastly different. The reason people compare my work to other comic book work is simply the reason that they think there is nothing else to compare them too, that that’s the only thing out there. I think that my stuff appeals more to people that read short stories and novels than the current comic book readers. The current comic book readers are, by large, science fiction fans, and I’m considering superheroes science fiction.

HP: Yeah, the general public just stays away from comics because they consider comics as a medium that is very limited and can do kid’s stuff stories involving monsters and superheroes, and things like that. Consequentially, I think that a lot of serious artists buy into that and never give comics a single thought. They don’t try and get into them and, in my opinion, the quality of comics stay really low. It becomes this vicious circle: people won’t get into it because they don’t think they can do anything with them, and comics stay the same. I’d like to see more realization among really gifted writers and people with more vision than comic book writers now get into the field, and raise the level and quality of comics. I’d like to see all sorts of different comics come out. There are people, like Joe Sacco, with his journalism. Why can’t we have more of that? Not just comic book journalism, but narratives of all kinds, and it just doesn’t occur to people.

CI: It’s sad that, in Europe, comics are given with a higher regard than they are here. I think that’s because American society has grown up with it as a "kid’s" medium, whereas in Europe it’s been introduced as an American import, and maybe they’re more open to branching out.

HP: I’ve heard that, but stuff that I’ve seen come out of Europe (and I haven’t seen some of this stuff in years)…I don’t look at comics too much anymore, since I don’t find too many of them satisfying, but when the stuff was coming out, there were a lot of film noir type of things and, to me, that’s not much better than the superhero stuff. I’d like to see stuff better than that come out. 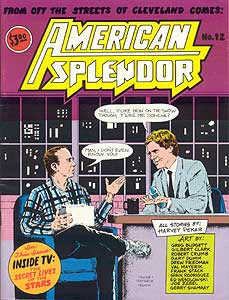 CI: I’ve also heard that you’ve had quite a few visitations with David Letterman. How would you rate that?

HP: It was an interesting experience, and certainly it didn’t help me sell comics. I don’t think anything can help me sell comics. There’s no audience for me in the comic book audience: they’re not interested in my work, and they even resent it, saying ‘This guy’s got a lot of nerve doing a comic book that’s not about flying people.’ Even though my appearance on Letterman didn’t sell any comics for me, it helped legitimize me with certain people; as a consequence, I got freelance writing gigs, sort of like what you’re doing. They’d say ‘Oh, yeah, we saw you on David Letterman. You can write jazz for us.’ Not that it has anything to do with jazz. ‘You’re on national television, how bad could you be?’

I learned some stuff, and verified some stuff about the entertainment industry in the United States. It’s pretty sleazy.

CI: I’ve heard nothing but horror stories from many creators. Do you still have the American Splendor movie up for option?

HP: Yeah, there are some people who are coming out here to Cleveland who want to direct the film, and to look things over. It’s going to be a real hard sell to raise money to make the film with. It’s been optioned five times, now. There has been interest expressed over the years. A lot of people don’t think that it’s a commercially viable idea, and that people aren’t going to want to see a movie about a file clerk from Cleveland.

CI:I think you could relate to that sooner than half the other characters out there.

HP: The movie business is more into glamour and stuff. Some of the people that have been interested in my work have wanted to make it into a cutesy sitcom type of thing, about this grumpy curmudgeony guy. I would take their money, I’ll tell the truth, if they could put that across.

CI: It amazes me what passes as entertainment nowadays.

HP: It’s always been bad, and it will be for the foreseeable future, I’m afraid that’s the way it is. People want the most lightweight stuff for recreation. I just happen to enjoy challenging reading and music…I can’t get anything out of vapid movie stuff.

Posted by Christopher Irving at 12:00 AM