At least, that’s how a serious reading of Stanley’s masterpiece Melvin Monster would go. In reprinting the library of Stanley’s comic book work, Drawn and Quarterly has wisely chosen the first three issues of Stanley’s Dell comic book. Melvin Monster is laced with black humor and all types of innocent slapstick “wrongness” that, had Dell published under the Comics Code censorship board, might not have seen print.

Melvin is a cute monster with a pointy hat, kind of a kid ogre, who lives with his Mummy and Baddy. Mummy, wrapped in bandages, and Baddy, blue-skinned with a mean streak, frequently discipline Melvin’s lack of monstrousness. Melvin engages in un-monster like behavior: he wants to go to school, not play hooky, and generally behaves himself. Much of the humor comes from Melvin’s wide-eyed niavete as he torments other monsters with his good behavior (including the witch of a school teacher), or unwittingly scares “human beans” on his trips to their world. 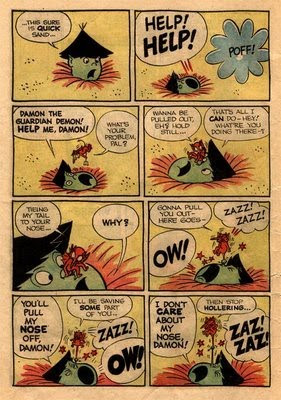 The first issue deals mostly with Melvin and his Guardian Demon, Damon, and Melvin’s meandering adventures to school, to the world of “human beans” (where he’s kept in a small cage in a millionaire’s private zoo), and back to the world of Monsters. Stanley tells the story through smaller chapters that possess the “and then…” quality of the best spoken bedtime stories. The second issue sends Melvin into the basement of their house, and is structured much like the first issue, while the third issue is a collection of shorter stories.

Stanley was king of the running gag: Cleopatra, the pet alligator, always has her mouth open to swallow Melvin; Baddy puts Melvin through a sandbox of quicksand and a slide aimed at a briar bush; Damon always gets Melvin’s name wrong; and Melvin always has a hard time getting into school. His use of language is also commendable, with Melvin talking like an actual kid, as opposed to an adult’s idea of how a kid talks, and both Baddy and Mummy have their own distinct voices.

Drawn and Quarterly has to be commended for such swell packaging for Melvin Monster: the hardcover features silver embossed type, while the thick page stock is colored so as to best give the feel of an old comic. The art design by Seth is classic and top-notch, making Melvin Monster a beautifully-produced package.

In the end, Melvin Monster is more than just a comics curiosity: it’s a presentation of an under-rated and under the radar kid’s comic by a master of the genre.

Posted by Christopher Irving at 8:02 AM