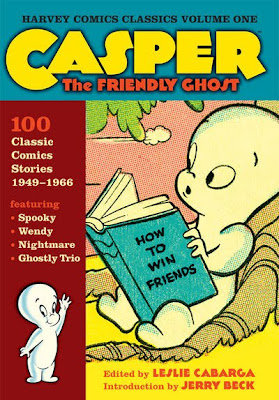 Casper had a rather convoluted origin: he was created by cartoonist Seymour Reit and animator Joe Oriolo in an unpublished story, The Friendly Ghost. The Friendly Ghost became a 1945 cartoon from Paramount’s Famous Studios (the in-house animation studio that took over the Fleischer Brothers Superman cartoons). Launching a series of cartoons, Casper didn’t actually gain a name until he first saw a four-color non-life in the St. John’s comic book.

The Dark Horse volume gives Casper’s first appearances in comics, reproduced in full color on slick paper, and reproduces both issues in their entireties, back-up stories included. When you consider that it only costs a few cents shy of ten bucks, it’s a pretty sweet deal. 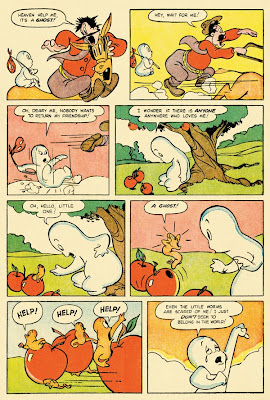 The typical Casper story has the central conflict of Casper not fitting in with the spooky world of ghosts, and going out to seek friendship in a world scared of ghosts. The first story in the St. John’s issue is no different, with Casper setting out, scaring everyone from horseback riders to roosters, and finally making friends with a young prince. It turns out that the prince’s father has just been killed by his crooked uncle, and Casper steps in to save the day, frightening the uncle and executioner henchman off After a Herman and Katnip story (think Tom and Jerry, but not vocally challenged), Baby Huey, and a couple others, we find Casper flunking out of ghost school, and then saving a new human friend’s dog from an evil dogcatcher.The stories in the St. John’s Casper #1 the same pattern of social rejection, departure, and then acceptance in the outside world after a good deed (either Casper’s scaring the evil uncle away, or Baby Huey defeating a chicken-hungry fox).They are, simply, fun children’s comics. Not Walt Kelly brilliant, but fun enough.

Casper’s world changes when he goes to Harvey: rather than living around real-life humans, his world is populated by anthromorphic animals. It’s a bit weird when, in one story, he scares two bears in swimsuits on a beach, and the next story a vicious killer bear in the woods. Casper would “live” at Harvey for decades to come; the stories from the first appearance there are beautifully delineated, and just a real joy to read. Casper goes from good deed to good deed, whether it’s finding a boy lost in the woods, or nabbing two bank robbers. 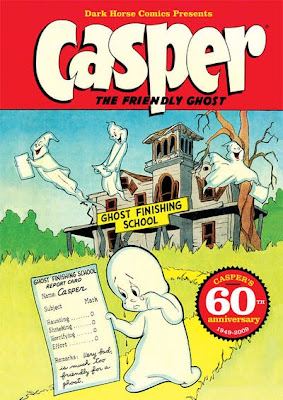 The only downside of this volume is the lack of biographical material: no background copy is provided. While it’s understandable that the credits may have been lost to both time and the anonymity of staff artists and freelancers not able to sign their work, some background on Paramount, Reit and Oriolo would be a great addition for the older readers.

But the kids? They’re going to love it as is. And that is a great thing.

Posted by Christopher Irving at 8:41 PM