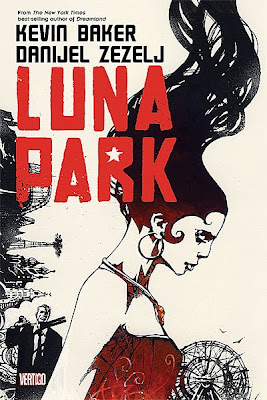 Luna Park is one heavy graphical novel. Adeptly penned by historical novelist Kevin Baker (the City of Fire trilogy) and beautifully illustrated by Danijel Zezelj (Northlanders), it takes readers on a journey from modern Brooklyn to late-90’s Chechnya, back to early 20th Century New York, and out to World War I era Russia, recreating each of these diverse settings with the richness of a Jacob Riis photograph. While the story gets a bit rocky towards the end, this is an incredibly ambitious project that raises interesting questions about the destructive nature of the human soul.

For this tour of New York’s past and present, I can think of no better guide than Kevin Baker. As the author of the City of Fire trilogy of novels, Baker made his reputation chronicling the exploits of the city’s poor and downtrodden, its immigrants and gangsters, its corrupt policemen and Tammany high muckety-mucks. In that century-spanning series, Carter’s words conjured an image of old New York that is so vivid, so complete in every detail, that the reader feels like he or she has actually seen the shining lights of the Dreamland amusement park in Coney Island, tasted the rotgut from a back alley block-and-fall joint near the Bowery, or smelled the commingled scent of boiling cabbage and human perspiration wafting from an overcrowded Lower East Side tenement apartment.

In Luna Park, Baker manages the transition to graphic storytelling with aplomb, scaling back his normally lush narrative so that it complements Danijel Zezelj’s images, rather than competing with them. Here Baker succeeds in transporting his readers to bygone eras of Coney Island and Novgorod, but he achieves that effect by capturing the dialogue and motivations of those who lived in those places and times, wisely relying upon Zezelj to complete the sensory experience for the reader. 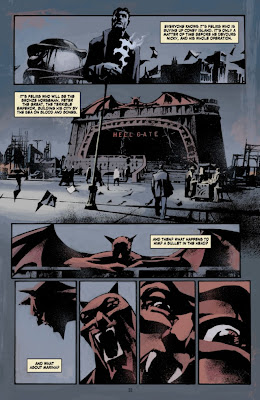 In many ways, Zezelj is an excellent artistic counterpart to Baker for this project. Gorgeously rendered scenes depicting an open-air marketplace on Hester Street, the opulent interior of the Brighton Beach night club Anastasia’s, and the nightmarish Hell Gate attraction at Luna Park (among many others) demonstrate a painstaking attention to detail that is perfectly suited for a Kevin Baker story. Particularly stunning are his depictions of the amusement parks at Coney Island, which Zezelj imbues with their own emotional qualities – whimsical and fantastic in the past, dreary and depressed in the present. Through facial expressions and body posture, he instills his characters with the same dramatic range, skillfully expressing at various times seductiveness and loneliness, love and rage, joy and terror.

Yet as well-matched as Baker and Zezelj are as collaborating artists, and as engrossing as their work is for most of the way, it falls just short of greatness at the end. Ahoy reader – ahead there be spoilers.

Luna Park begins as a contemporary take on the immigrant tale, a genre in which Baker is well-versed. Alik Strelnikov is a Russian veteran of the war in Chechnya now living in present-day Coney Island, where he works collecting protection money for a small-time Brooklyn gangster. Alik is tormented by the wartime atrocities he witnessed and tries to cope using heavy doses of his two favorite addictive substances – heroin and Marina, a fortune teller-come-prostitute enthralled to another gangster poised to muscle Alik’s employer out of the neighborhood. Marina’s nightly visits help Alik to forget the past, but something about her seems to cause him to relive it at the same time. Eventually the pair cooks up a scheme to free themselves from their plight by double-crossing Marina’s boss, but Marina then double-crosses Alik, and he stumbles, bleeding from gunshot wounds, into the Luna Park funhouse.

Here the book takes a metaphysical shift, and we are introduced to another Alik, who immigrates to New York from Russia with his family at the turn of the twentieth century. He grows up and joins the Army to serve in the Great War, and after witnessing horrors of trench warfare war in France, he is deployed to his home town of Novgorod in Russia, in an attempt by the Allies to help Czarist forces repress the Bolshevik uprising. There he ignites an affair with Mariya, an old flame from his youth in Novgorod, who now has a son named Alexander by a husband who was killed in the war years before. This Alik is eventually also betrayed by Mariya and Alexander, and as he lay bleeding out in a bathhouse, Mariya reveals that she is a previous incarnation of Marina, that he (Alik) is a previous incarnation of the present day Alik, and that Alexander would grow up to be the grandfather of that modern day Alik.

This shift in focus doesn’t upset the vibe of Luna Park too much at first, because the story already had a mystical quality to it centered around the old amusement parks in Coney Island. Baker also laid the groundwork for this shift by establishing the link between the present day Alik and the WWI-era Alik through recurring dreams experienced by both which grant each Alik a glimpse into the other’s life. Baker also uses reincarnation as an interesting vehicle to express the idea of betrayal and violence begetting further betrayal and violence in an endless cycle that repeats tragically throughout human history. This vicious cycle is particularly interesting because Baker seems to be focusing on those instances where a woman deceives a man, resulting in his ruin.

The reason why this idea works (initially) in Luna Park is that Baker draws the story arc of Present Day Alik in exact parallel with WWI-Era Alik. Both Aliks have roots in Novgorod and immigrate to New York. Both join an army to satisfy a romantic need to become a hero, become disillusioned by the experience, and then later resuscitate their hero fantasies in attempts to rescue a woman from some desperate circumstance. Both are in the end set up by that woman, and lose their lives as a result.

But these parallels begin to veer off track when Baker tries to extrapolate them out to other events in Russian history. The mass execution of the Drevlian mobility by Saint Olga of Kiev in revenge for their murder of her husband Igor in the mid-tenth century, the destruction of the Rus army by Ogedei Khan in the thirteenth, the death of Anastasia, wife of Czar Ivan the Terrible in the sixteenth, the bloody suppression of the Decemberists by Czarist forces in the nineteenth – these events are all presented by Baker as instances in which the tormented souls of Alik and Marina have betrayed each other again and again throughout the course of history. Baker then extrapolates this paradigm even further into twentieth century America, reincarnating Alik and Marina again as Lee Harvey Oswald and his Russian wife Marina. 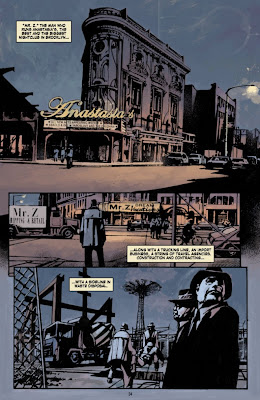 All of these events were violent and a few even involved documented instances of betrayal, but none were shown to be instances of men meeting their demise after being betrayed by a lover. Even in the Oswald-Marina sequence in the book’s final pages, there is never a moment in which it’s implied that Marina had anything to do with JFK’s assassination. Though this would be historically inaccurate, it would seem necessary for Baker to take some liberty there (this is fiction, after all) in order to be able to successfully apply his betrayal paradigm to that historical event. Because he represents the events leading up to the assassination more or less accurately, the delicate and intricate metaphysical model Baker has constructed collapses like a house of cards once the weight of historical context is applied.

But perhaps most importantly, the ending just wasn’t satisfying dramatically. The action shifts from the present to the past with about a third of the book left, and Baker never brings it back before the end. Present Day Alik is led through a door in the Luna Park Hell Gate attraction by Marina on page 102, then the perspective shifts to that of WWI-Era Alik, and again to Lee Harvey Oswald on 152, and the book ends on page 158 without ever reverting the action back to the character who was our protagonist for two thirds of the story. If Baker had elected to show some kind of familial connection between Oswald’s wife and Alik’s grandfather Alexander, he might have strengthened the link between Oswald and Alik and produced a more satisfying end. With only a shaky connection having been made by Baker between Alik and Oswald, Zezelj’s story-ending half-page panel depicting the JFK funeral procession lost the dramatic punch it should have had.

For all its flaws, Luna Park is an attractive book rife with thought-provoking ideas about the nature of humankind and our tendency to repeat our own mistakes across generations. The graphic storytelling medium can only benefit from talented artists like Baker and Zezelj contributing such ambitious works, and through its first two thirds, Luna Park appeared to have the marks of a classic. Here’s hoping that Baker continues to ply his trade in comics and that his next effort is a more complete one.

Miles Archer loves crime comics, old school hip-hop and The Super-Friends. He has profiled some very interesting artists in film, music, fashion and comics for publications such as Mixer, Mass Appeal, YRB and Big Shot. He doesn’t have his own website yet, but hopes you won’t think any less of him as a person because of it. He lives in Harlem with his wife and what must be the last standard-definition television on the eastern seaboard.

Posted by Christopher Irving at 6:13 PM