How to Draw Harvey Pekar by Rick Parker 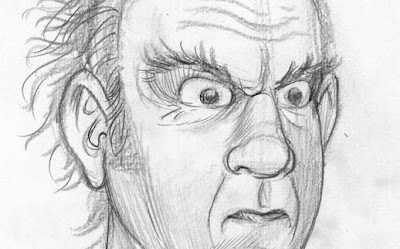 As preparation, I did a Google Image Search for the subject, (Harvey Pekar) looking at and downloading a reasonable number of photographic and artistic renderings of him and tried and get a “feel” for the guy.I took special note of the relationships between various features of his face, such as the distance between his nose and mouth, for example, or the shape of his upper lip including all the fleshy parts between his nose and the actual opening of his mouth. 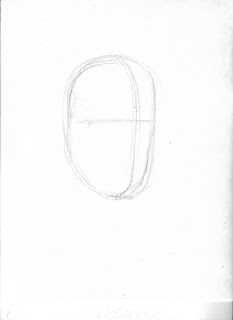 1. Rough Sketch. On a sheet of paper I began by lightly sketching in a rough oval to represent the basic shape of his head. Next, I roughed in two lines, the first follows the “form” of the head and divides it into a right and left half, and the other is for placement of his eyes on the face. 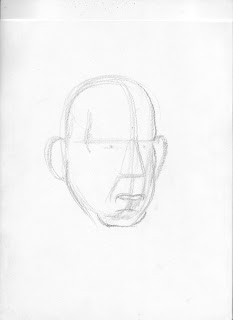 2. Refine Sketch. Using the eye-line as a guide, I roughed in the various features, nose, mouth, chin, ears, bone structure of eye, plus a prominent wrinkle defining a fleshy cheek. I noticed from my photo reference that his jaw line leads into his neck. 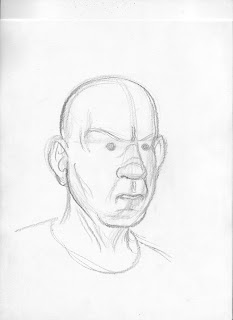 3. Refine Features. At this point I began to refine the various features of his face adding things like the convolutions of his ear and the angle of his brow. Perhaps a few more lines were added to get a feel for the form of the nose and neck. 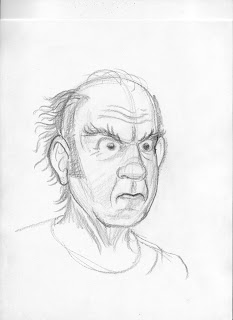 4. Further Refine Features. This seemed like a good time to rough in the hair and add a few more lines to define the brow, lines under the eyes and shape of the mouth. 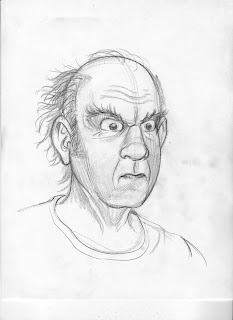 5. Finish Pencil Drawing. Here I have strengthened some lines for the “form” of the nose, indicated shading on planes of the face, and added a shadow on the side of his face. Plus a few more hairs to the top of his head. 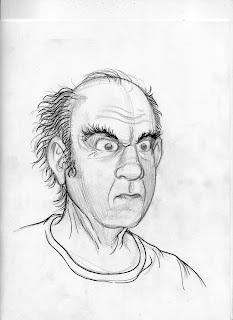 6. Ink Hair. For this particular drawing, I decided to use a #0.7 Pigment Liner pen made by STAEDTLER for the black lines and began to indicate the hair, lines in the neck and T-shirt. I also often like using a “brushpen.” 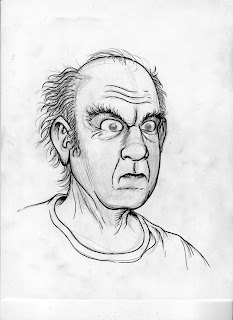 7. Refine Inks. With my 0.7 pen, I begin to draw over the pencil lines perhaps thickening the lines on the far side of the face and filling in the plane of his upper lip as a solid black. 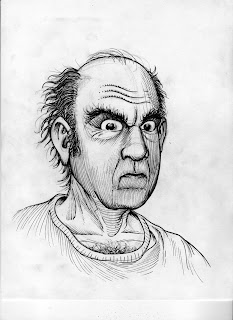 8. Ink Face Planes. Pen in hand, I move around the face quickly thickening some lines and adding more hair and drawing thin strokes with the pen to indicate the various places of the face and wrinkles on the T-shirt. I decided to have the eyes looking more directly at the viewer for a more “intense” look. 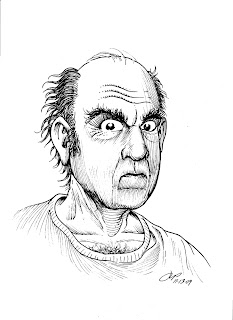 9. Tweak and Erase. I added a few more lines to the planes of the face, a few more to the hair and shirt and then I erase my pencil drawing, trying not to crease, damage or wrinkle the original artwork. I’m reasonably satisfied with what I see, and I am not a “perfectionist”, so I sign and date it. Then it’s scanned at 300 dpi. as a bitmap image, saved-- and converted to Grayscale and saved again. 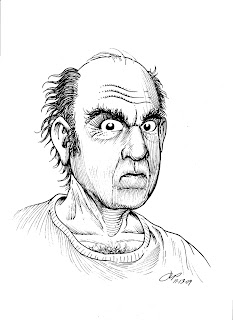 10. Re-Tweak. (Working digitally at this point.) Not much changes here, but perhaps joining the jaw line with the neck or lightening some heavy-handed inking here or there. 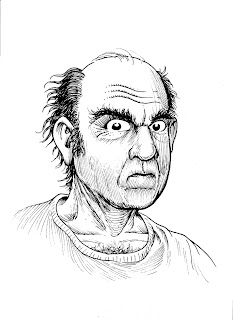 11. Stretch and touch-up. Comparing the drawing at this stage with a photograph of the subject from the same angle it seems that my drawing could benefit from being stretched horizontally, so I do so. You gotta’ love computers!! I digitally re-connect the black lines in the neck between the stretched head and un-stretched neck. I’m Finished. 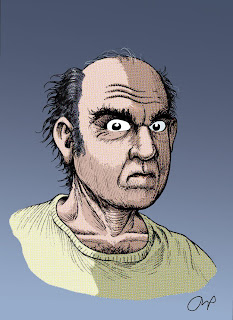 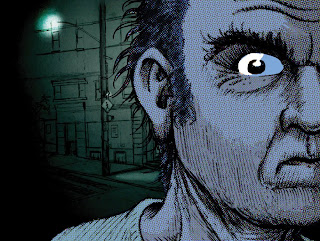 13. Digitally Combine Image with existing previously drawn and colored background image based on actual photograph of Cleveland street corner in an interesting way. Feel good about the world for a few brief, enjoyable seconds then start to think of what to do next.

To see how Rick Parker applies his techniques to a finished Harvey Pekar story, check out his work at SMITH Magazine's The Pekar Project.

Rick Parker is best known as the artist of MTV’s Beavis and Butt-Head comics from Marvel. Rick was on staff at Marvel Comics in the ’70s and ’80s doing lettering and production work. He currently draws the intro pages featuring the Old Witch, The Vault Keeper and the Crypt Keeper for the new Tales From the Crypt comics. Parker is currently working on an upcoming graphic novel Tales From The Crypt: The Diary of A Stinky Dead Kid and his own ongoing webcomics, Parker’s Comics & Stories. Parker recently drew a Next-Door Neighbor story for SMITH, Night of the Black Chrysanthemum.

Posted by Christopher Irving at 2:41 PM