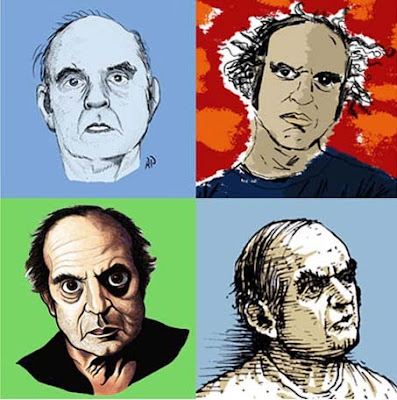 Harvey Pekar was a sort of gateway for me. When I was thirteen, Letterman was my nightly pleasure. I'd stay up till 1:30 am as many nights as I could make it happen without passing out. I'd sleepwalk through school but it was worth it. I found the comedy and confident tone of the show to be a view of what I wanted and dreamed the adult world to be.

Simultaneously, I dreamed of writing comic books. I had read a list of books that Denny O'Neil had recommended for learning the craft of story structure and had been practicing scripting with my line of derivitave (yet contentiously defended to not be) superheroes.

When Harvey Pekar appeared this time, he was introduced as a “comic writer” but they weren't specific which book. The only black and white books I was aware of at the time were the turtles (and all the knock offs) and Paul Chadwick's Concrete. Obviously, Harvey Pekar wrote super hero stories and I was in awe that you could become famous enough to be on David Letterman just by writing comics.

When he came onstage and Letterman dismissedly presented a copy of American Splendor and made fun of Harvey Pekar's shoes, I at once realized how much more expansive and intricate the adult world really was. I also realized that big dog high school bullshit never ends for us weirdos. That if I chose this route that I would forever have to deal with assholes. I kept watching David Letterman but the thrill was gone. The bubble burst, the fantasy shattered like a nonexistent window hit by a flung index card.

A cool uncle (probably one of the best places to discover non-superhero comics for a kid in the late eighties) gave me a stack of American Splendors and I was hooked.

In the war for my attention, Pekar was the winner. And he has remained a winner. As other folks in the autobiographical (if you can even call it that) genre of comics have come and gone and run out of material Pekar has consistently delivered. To see his words is to read an old friend (though I have never met the man...I kinda don't want to, knowing him through his work has been a real treat and I imagine he isn't always “on” and the very real threat of not being notable enough to become a character in his work is terrfying to me).

This new project is fantastic. These artists are perfect accents for the scripts they are provided. Harvey still comes through loud and clear and remains as sharp and introspective as ever. 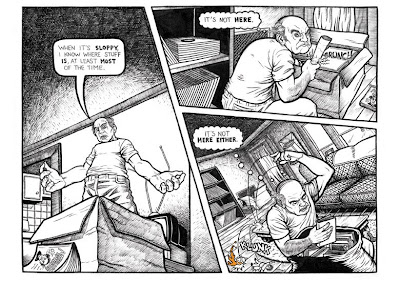 Sean Pryor is cool. I don't know what Mad Magazine looks like nowadays but I would hope they have guys who draw like him. I enjoyed the forced perspective on some of his panels. I like dynamic over emotive drawings of the mundane. For example, I have a fetish for images of super heroes eating. The piece “Searchin'” is great. Watching Harvey struggling to find “his stuff” in a freshly cleaned room to the point where he knocks over his orange soda is rendered in such an overtly dynamic style that it perfectly reflects the absolute inanity of the crisis.

This is my kind of Pekar. This type of observational storytelling could very easily fall into the land of stand up comedy but it maintains a simple zen-like meditative voice which accepts the gravity of very real annoyances.

“Sweeping Problem” has a similar feel, though rendered in a wildly different style by Joseph Remnant. Joseph draws well with good texture and great positioning of figures. His work looks the most like I imagine Harvey's comics to look. His shading has a loose and sparse feel. I would like a little more contrast between the blacks and whites, it doesn't seem dark and rough enough for me his work on “Legendary Vienna” has great contrast and a classic “white wall rant” sequence ta boot! 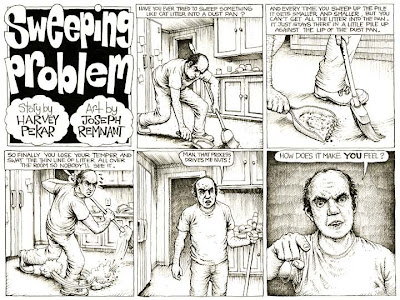 Once again, in “Sweeping Problem”, I love the confrontation of such a minor hassle in day to day life being expressed. I love the breakdown of the 4th wall at the end. It's an admission of overtly drawing a response from readers. I'll tell you how I feel about cat litter sweeping, Mr. Pekar. Oh boy, let me tell ya'! The instant he brings up this irritating bit of daily minutia one can't help but think of their own experiences with the same thing. Life is more than operatic love stories and tragic unemployments. It's a lot more. And much of it is a shared experience. Pekar may not be the spokesman for all mankind but when I read him he does become a kind of spokesman for me. It's allowed and appreciated. In a world where many of us feel a lack of representation in politics and art it is the best feeling when someone speaks about things that you care about(even just a little) in a way that you respond to. 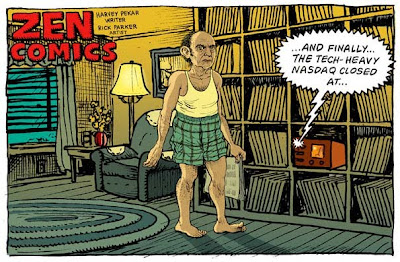 Rick Parker's work looks fresh and exciting. His use of strong bold color with tight rendering works. The rigidness of the characters feels intentional, as though they are truly frozen within each panel. I like this. It has a sophistication to it. He tends to draw Harvey Pekar as a little bit monstrous, this is how I tend to prefer him. In “Zen Comics” we see him in his underpants and A-shirt caught in a moment of awakening as an epiphony is reached. It's like seeing a writer taking a shit and seeing God for a moment. The lack of context strengthens the piece, it isn't about the realization but the act of realization. Thanks. These moments of quiet celebration are what drive us. 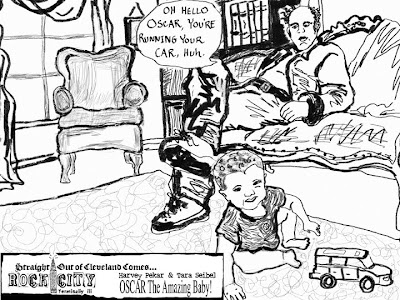 My favorite artist for this series is definitley Tara Seibel. Her color and loose rendering are a great way to experience Harvey Pekar. Her lack of clarity is kick ass. Harvey Pekar's comic stories are not always aout precision and clearly deliniated borders. They are a rambling swathe of a trail through a chaotic jungle. A trail hacked away by sheer force of will and artistic pride. Tara Seibel makes the trail a more obvious thing as she chaotically surrounds each piece with loose and careful areas of strong color. Although my favorite piece by her is “Oscar the Amazing Baby” where an aged Harvey Pekar humorously sings the praises of an infant. She breaks off large areas with crude lines and fills them with wonderful textures that create a veritable symphony of weight and feel. A true masterpiece.

I'm not sure if this is Harvey pekar's first large movement into web comics but I hope it inspires him to continue on this route. The format works for him and the brevity of the pieces serves the stories. That being said, I hope he never gives up his longer form storytelling as it hits bigger and stronger notes. Reading these is like listening to orchestra chimes instead of church bells. Both sound great but man those church bells will rock your face off. Overall, this series is a succesfull and multifaceted spearheading of Mr. Pekar's work into the digital age and I can't wait to see what unfolds next...hopefully a longer piece. Enjoy!

Jared Gniewek has worked in the music industry as a back line technician, performer, and promoter. He has also been a freelance writer whose work can be seen in the recent re-launch of Tales from the Crypt and heard on The Dark Sense, an audio anthology of the macabre for which he is also the story editor. Jared’s blog, Die By The Pen, outlines his philosophies and personal quest as a writer while he also masterminds a demented karoake game called Scary-Oke

Posted by Christopher Irving at 8:48 AM