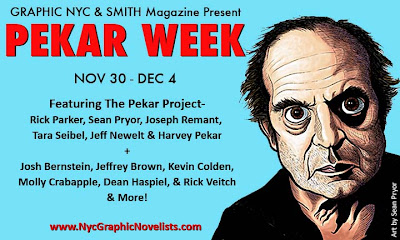 During the week of November 30th, Graphic NYC teams with SMITH Magazine to celebrate comics’ favorite curmudgeonly and likable autobio writer with Harvey Pekar Week, taking a look at the former file clerk’s career from American Splendor to The Pekar Project.
“We had a chance to hang out with Harvey, Jeff Newelt, and the Pekar Project folks at the King Con a few weeks ago,” GNYC editor and writer Christopher Irving says. “What started as an interview soon mutated into something more, an experimental hybrid of my profile-writing with Seth’s love of fumetti, and that soon grew into an entire week’s worth of content for Graphic NYC.”
Monday starts off in the artists’ corner, with Pekar Project’s Rick Parker giving a step-by-step tutorial on "How to Draw Harvey Pekar", followed up with "The Anatomy of an American Splendor Cover" by cartoonist Dean Haspiel. Tuesday features a profile on Harvey, which offers a unique blend of Kushner’s photos of Pekar with word balloons derived from Irving’s essay, the two components synergized into a comic book marriage of words and pictures.
“This one’s all Seth,” Irving says. “He was a total nut on this piece, and the end result is even more unlike anything done before in comics journalism.”
“I’ve wanted to experiment with doing sequential stories with photos and text for a long time, and a profile on Harvey Pekar seemed like an appropriate place to start,” Seth says. “Harvey’s written comics about himself for so many different great and varied artists over the years, it only seemed natural for me to portray him photographically in a comics form.”
Wednesday features “The Pekar Project: Getting’ the Band Together,” which has portraits of the four Pekar Project artists, as well as quotes and bios on each. Thursday features Jared Gniewek’s review of The Pekar Project, and Friday has an encore presentation of Seth’s essay “How Harvey Pekar Got Me Laid,” this time with illustrations by Kevin Colden, (Fishtown), Seth’s collaborator on Schmuck (now online at ACT-I-VATE); and Friday sees one from the vaults, as Irving presents a 2000 interview he did with Harvey for Comics Buyer’s Guide.
“Also this week, Graphic NYC will be enabling commenting, so we look forward to hearing what our readers think.” Kushner says. “Pekar Week has been a ton of work to put together, and we’re excited to share all of the great content we’ll be posting throughout the week."
Thanks to SMITH Magazine, Jeff Newelt, Rick Parker, Dean Haspiel and all of the artists who contributed.
Graphic NYC's profile on Harvey
How to Draw Harvey Pekar by Rick Parker
Dean Haspiel's Anatomy of an American Splendor Cover
Graphically Speaking: The Pekar Project
The Pekar Project: Gettin' the Band Together
Origin of the Harvey Heads
Q and A: Harvey Pekar in 2000
How Harvey Pekar Got Me Laid by Seth Kushner