Is anyone out there?

This is the deal. My life has changed a ton since starting this project over a decade ago.

As I write this, I'm a full time professor at Virginia Commonwealth University's Communication Arts department. I get to teach comics, visual communication, and media/film classes.

It rocks. The hope is to get the workload and frenzied grading excitement to calm down enough and get back to writing even more.

Another thing happened: I became an independent publisher of everything from trading cards to pulp novels, all done through crowdfunding.

(At this point, I unashamedly plug my current campaign, a fun pack of goodies with Michael Allred's Madmaniverse cast of characters!): 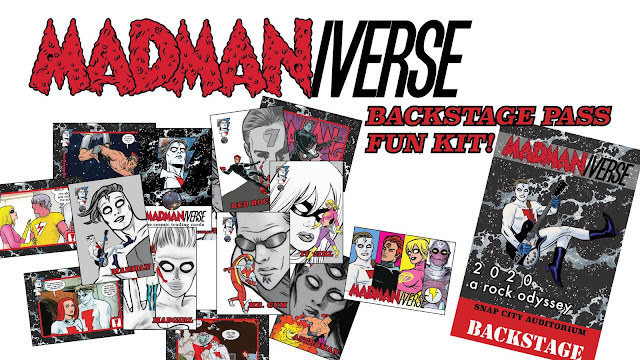 This is the dilemma: With my life and career changing, should I keep Graphic NYC up? How many of you are even looking at this?

Part of me wants to keep this going for the sake of posterity, but a big part has been planning on taking the site down for a while yet to figure out the next form for my best creator interviews to take.

Shoot me an email. Lemme know!
Posted by Christopher Irving at 6:01 PM

On Graphic NYC and New Beginnings

A couple of weeks ago, several Brooklyn comic book creators had to move out of their studio building in Gowanus in the name of Progress with a capital “P.” Apparently, the most industrial part of the borough is now the most stylish one for those with trust funds, high bank accounts, or “professional” jobs. It is just one more example of the city shoving out the creative culture that made New York the greatest place in the world.
One of the first residents of the building, Dean Haspiel, has spoken at length about the exodus from the building. As with everything Dean produces, it has the epic scale of a Jack Kirby comic book.
He is, however, completely on the nose with this: the departure of over a dozen cartoonists from that one drafty old converted warehouse is the end of what was one of the greatest collections of creators under one roof. It is also further testimony of New York City pushing its artists out.

The first time I went to the studio, it was in 2008, during a blizzard of epic proportions. Snow pelted down on me from the subway exit and was so thick I could hardly make out the buildings. Dean’s voice cracked through my flip phone as I squinted against stinging bits of ice. Like all important things, memory has a way of elevating the mundane into the dramatic: this is one instance where I concede to this more dramatic version.

I was on the verge of fulfilling my lifelong dream of living in New York City. My corporate job in Richmond, Virginia was ending from the company’s demise, and I had a few months’ severance pay to make the move with. I had fallen in love with the girl of my dreams, and also started what is still my crowning achievement as a journalist/historian. Moving up there, hanging with artists, working on Graphic NYC with my photographer partner, Seth Kushner, and spending time with this girl--made it all ideal.
Shortly after arriving, I took up a desk in the studio shared by my old friend Reilly Brown: he was drawing Deadpool for Marvel, and I was building model kit commissions for a collector friend back in Virginia. We moved into another space after about a year, and picked up even more people. I spent almost forty hours a week in that building, alongside my best pal, sharing a pot of coffee in Deep Six studio with Simon Fraser, a shot of whiskey with Dean, or torrenting the latest Doctor Who with another studio mate.
Meanwhile, Graphic NYC was going strong. Seth and I were still hunting for a publisher, and were getting noticed by blogs major and minor. The days we spent hopping the subway to interview and photograph comics legends are days I hope to be interviewed about myself one day. On top of all of that, I was about to go back to school for my Masters.
The biggest challenge I learned from GNYC was that, while I started with my aspirations of being a documentarian and historian, becoming too knee-deep in the creative side of comics was a detriment to the project. There was also this duality between Seth and I: While I was striving to do work that best represented the subjects, he was contributing an idealized version of them through their photo portraits.
My goal as the GNYC writer was to be like the anonymous reporter in Citizen Kane, limited to the shadows, and ultimately unimportant to the viewer. Yet, as it progressed, there were instances where I worked on honing my voice within those limitations.
I was in the middle of this intense creative energy, but I would by lying if I pretended there weren’t difficulties. That’s the thing about New York, though: the city has a way of kicking your ass into remembering who you were, while also shaping you into the person you needed to be to survive.
I got through it all, somehow, and then fate bludgeoned me with reality.

My father died on July, 2010, and the people who were there for me everyday were the community in Gowanus. I finished up my Masters two weeks after Leaping Tall Buildings came out. While it is a project to be proud of (or beyond proud, as it is still my favorite accomplishment as a historian), the failure of the distributor to know how to sell it, as well as a shortage of reviews within the comics blogosphere, lacked to create an awareness of it that boosted sales enough. One misguided review in a major paper did boost our sales, but it still never took off as much as we wanted to.
After a year of struggling, unable to find work, I had to do like many other New York residents and give up living in the boroughs. In the process, I left behind a girlfriend who opted to stay rather than move with me, and moved back to Richmond for a contract advertising job that let me go after a couple of months. Within months, I was mostly working as an extra on local TV and film productions, still burnt out from the years of Graphic NYC and grad school; while I continued to pine away for New York and my friends there, it allowed me a chance to flex different muscles.
Then, Seth was diagnosed with Leukemia and passed away a year later. 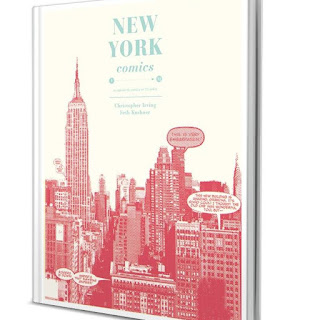 Just yesterday, I got my first copy of New York Comics, by French publisher, MuttPop, in the mail. We'd started working on it before Seth's diagnosis and, with the help of Seth's friends Howard Wallach and Carlos Molina, finished it about a year after his death. Holding it now is a form of acceptance that he's gone, but also a reminder that I now have more to say about New York and its comics creators.
I like to think Seth’s between the panels of a comic book page. Every once in awhile, I let myself squint and see him, right there, camera in one hand, wireless flash in the other.

When he was an editor at DC Comics, Bob Schreck gave me some golden advice after I’d sent him a comics pitch that just wasn’t good. He told me, in essence, that I just wasn’t ready. As far as a comic book writer goes, I hadn’t lived enough and had yet to hone the voice that I needed to be something distinctive and original. Or maybe it was there and I hadn’t harnessed it yet?
Whatever the case, it’s the best tough love creative advice anyone has ever given me.
In terms of life since New York, I have been teaching Comic Book History and Comics to Film at Virginia Commonwealth University’s Communication Arts and Design department (the first time a straight history course officially titled "Comic Book History" has been offered at VCU), and am publishing comic book trading cards through my own Kickstarter-funded The Drawn Word.
As I looked at the Graphic NYC website the other night, I thought of the things we did that no one else had: Together, Seth and I presented the expanse of comics history in New York through its comics creators (and a few, admittedly, from outside NYC). His photographic approach has been aped since then, and it’s no secret to many of us that he will always be the first.
One of the last media interviews we did for Leaping Tall Buildings was for a magazine, right in Tudor City park. We pointed out the Tudor City sign and discussed how Will Eisner formed the first true comics studio there in the early days of the medium.
And then we went into the Daily News building, so Seth could show me the actual Daily Planet from the Christopher Reeve Superman films.
Seventy years from now, there might be two other thirty-somethings sitting outside a specific building in Gowanus, talking about how important it was to the creative formation of comics. Whether it was or wasn’t doesn’t, ultimately, matter. What does matter is the concentration of such talent under one roof and that future historians will be looking back at that moment as lightning in a bottle.
Posted by Christopher Irving at 9:58 AM